Citing the rise of China, the weakening Euro, the financial crisis and the Arab Spring, Blair said, "It's unsurprising that some, in our part of the world, ask this question: They say the 20th century belonged to us, but will the 21st century belong to someone else? Are we an empire that's fading?"

"Indonesia is three times the size of Germany," Blair told the assembled graduates and their families. "The Arab world is set to double its population in the next 25 years."

Blair went on to say that we are living in an "era of unique unpredictability," and that there is "uncertainty everywhere." 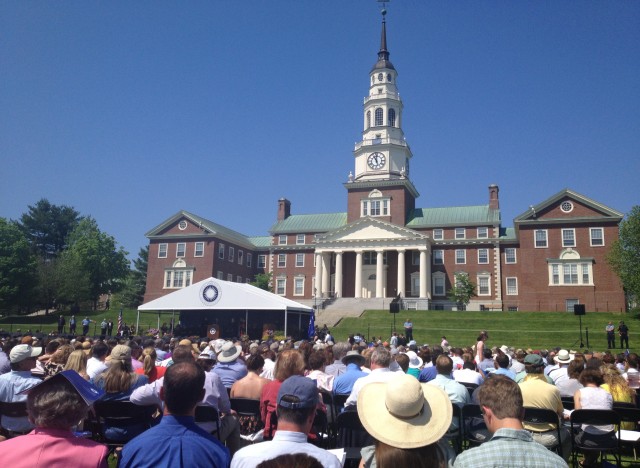 While Blair delivered his 14-minute speech, a small group of protesters stood behind the crowd holding signs that criticized him for his involvement in the Iraq War, among other things.

At one point during Blair's speech, a male protester shouted "war-monger." Police asked the man to leave, and when he refused, he was arrested and charged with disorderly conduct, the Bangor Daily News reports.

The man was identified as Lawrence Reichard, 53, of Bangor, Maine.

Blair gave no indication he'd heard Reichard's shout. His speech was not interrupted by the protest or Reichard's arrest.

Jody Spear, who graduated from Colby in 1963, told The Huffington Post that she decided to protest Blair's speech after visiting the website of Blair's 4-year-old charity foundation, The Tony Blair Faith Foundation.

"It's clap-trap," said Spear, who drove two and a half hours to protest the speech. "He says you can't have a moral compass unless you're a religious person." 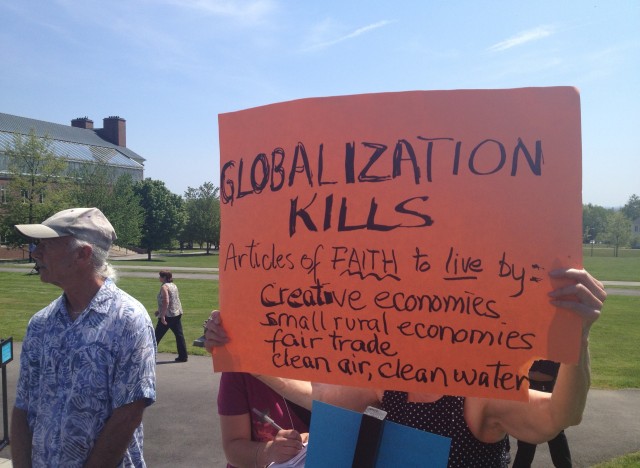 Blair also told the crowd at Colby seven things he'd learned in life, including "be a leader, not a follower," "giving is as good as getting" and "you learn best with an open mind."

"Be a doer and not a critic," Blair said. "Human progress has never been shaped by commentators, complainers or cynics."

Blair served as prime minister of Britain from 1997 until his resignation in 2007. After he stepped down, Blair was named special envoy for the Quartet on the Middle East, an international mediator for the Israeli-Palestinian conflict.