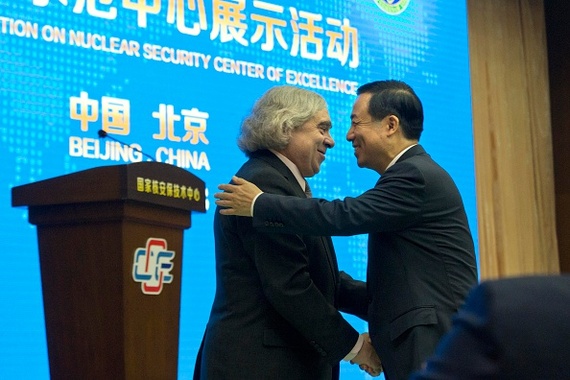 China and the United States have made remarkable strides in cooperating on nuclear security matters--in every area except the one that arguably matters most: the military sector.

On March 18, shortly before Chinese President Xi Jinping arrived in Washington for the 2016 Nuclear Security Summit at the end of the month, the two countries opened a Center of Excellence on Nuclear Security in Beijing.

As the largest and most advanced such center in the Asia-Pacific region, it will be a unique forum for exchanging technical information, sharing best practices, developing training courses and promoting technical collaboration to enhance nuclear security throughout the region and even worldwide.

However, the defense laboratories and facilities that control most of China's weapons-usable fissile materials--and all its nuclear weapons - have not formally participated in these recent exchanges, because cooperation was cut off following U.S. charges of Chinese spying in the 1990s. This is a critical gap in China's nuclear security that should be addressed immediately.

Individuals from some Chinese nuclear institutions have reportedly participated in some joint workshops and discussions, and the China Atomic Energy Authority, which regulates both the civilian and military sectors, does participate. But deeper cooperation would significantly enhance global nuclear security progress.

The two governments conducted a lab-to-lab program of cooperation from 1995 to 1998. It was designed to help create interest in China in stronger security systems by demonstrating a modern system's advantages for material protection, control and accounting. But in 1999, the Cox Committee Report alleged Chinese espionage at U.S. nuclear weapons laboratories, and the program ended. Since then, direct nuclear security and control cooperation on China's military materials, facilities and nuclear weapons has not even been discussed.

The problem appears to be purely political. As a condition for restarting the lab-to-lab program, Beijing asked Washington to agree that the program was legal and mutually beneficial. Washington instead proposed a number of statements focusing more on the future, which have not been satisfactory to Beijing.

The impasse has stalled more focused work related to the defense sector that deals with nuclear weapons and the most sensitive nuclear materials. Key to a deeper relationship would be renewed lab-to-lab cooperation, strengthening China's security culture and exchanging visits at actual military nuclear materials and weapons sites, starting with less sensitive ones.

The rising threat of nuclear terrorism should be great enough for abandoning past political disputes. At the 2014 Nuclear Security Summit, President Xi noted that increased cooperation on nuclear security in any country benefits all countries. And President Obama has declared that the biggest threat to U.S. security is the possibility that terrorists might obtain a nuclear weapon.

Hui Zhang is a Senior Research Associate with the Project on Managing the Atom at Harvard University's Belfer Center for Science and International Affairs, which is supported by Carnegie Corporation of New York.

The views expressed above are the author's own.

This post is part of a blog series produced by The Huffington Post and Carnegie Corporation of New York about issues related to the 2016 Nuclear Security Summit. World leaders will gather in Washington, D.C., on March 31-April 1 to address the threat of nuclear terrorism and steps toward creating a global nuclear-security system to prevent it. To view all of the posts in the series, visit here. Join the conversation on Twitter at @CarnegieCorp, #NSS2016.