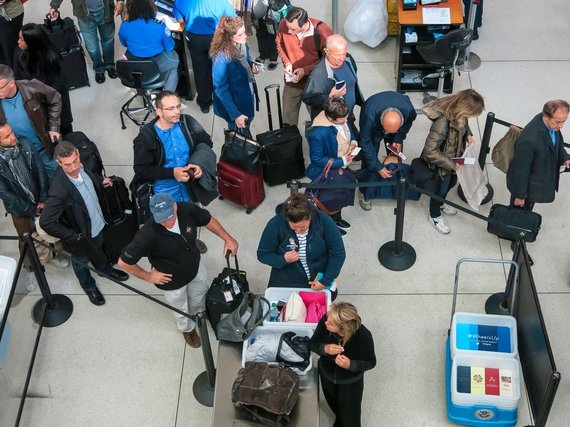 States refusing to comply with the Real ID Act may finally pay the price--but travelers are in the clear for two more years.

In September, we heard the Department of Homeland Security would begin to enforce the Real ID Act for air travel in 2016, which would require secondary identification for licenses issued by four U.S. states. Now, the DHS has upped the number of licenses that don't meet their standards, which means that if you're carrying one from Alaska, California, Illinois, Minnesota, Missouri, New Jersey, New Mexico, South Carolina, Washington state, Puerto Rico, Guam, or the U.S. Virgin Islands, you might find yourself turned away if you're not prepared.

WHY IS THIS HAPPENING?

In 2005, following the recommendation of the 9/11 Commission, the Real ID Act was passed by Congress with the end goal of making fake IDs harder to obtain. U.S. states and territories were to enforce stricter requirements when issuing IDs, including demanding more proof of identity. Several states, however, refused to comply because of privacy concerns, and it's catching up to them: Extensions to Real ID requirements are slated to expire on January 10, 2016. The DHS has already denied further extensions for Missouri, Illinois, Minnesota, and Washington state, and has reputedly said they will not extend deadlines for other states.

WHAT DOES THIS MEAN?

Don't break out that passport just yet. Despite the looming deadline, the DHS has been vague about actually implementing the law. In the most recent update, the DHS said travelers could keep using their current licenses for two more years; states that don't comply with the Real ID Act have until January 22, 2018 to issue better IDs, but as of October 1, 2020, all travelers will need a Real ID-compliant license (or passport) to fly.

Under current guidelines, all state-issued licenses and identification cards (see full list at TSA.gov) are accepted at airport checkpoints.