It’s no surprise that a huge amount of cash is being spent in the United States on men and women who are aging into their 70s, 80s, and 90s while in prison. On Saturday, NBC News published a fascinating look into the costs and concerns related to this elderly population behind bars. From the report:

By the year 2030, there will be upward of 400,000 elderly prisoners — nearly a third of the projected total penal population

* In Georgia, prisoners age 65 and older command an annual average medical care cost of $8,565 — a huge leap from the annual average of $961 for inmates under age 65, according to a report by the Human Rights Watch.

* In North Carolina, the price tag on medical care for elderly prisoners is four times higher than the cost of the same care for prisoners younger than 50, according to the ACLU report — an inequality that may expand as baby boomers behind bars grey.

* In Michigan, health care for inmates age 80 and older costs prisons as much as $40,000 per person, according to the Human Rights Watch report — nearly the cost of a year of private college tuition. [sic] 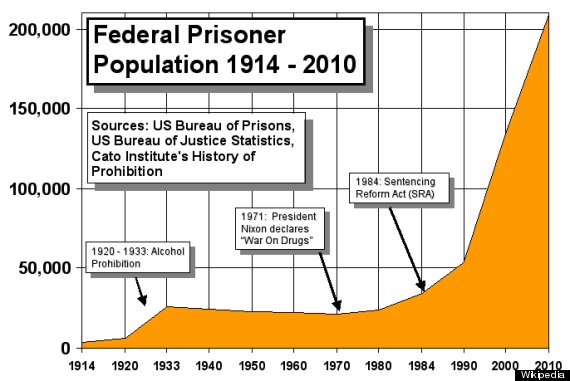 Unfortunately, the story, much like the debate over many prison spending issues in this country, ends with a big shrug: The ACLU says elderly prisoners need to be paroled, while victims’ rights groups say parole would offend victims. The last line goes to the ACLU’s David Fathi, who says, “We can’t keep everyone locked up forever.”

Our shared history of incarceration rates in the U.S. over the last 40 years says otherwise. And unless there’s serious debate in this country over the value of permanent punishment versus the value of a criminal justice system addicted to incarceration, there’s not much that’s likely to change.