With "Back to the Future Day" approaching, I thought it would be nice to spotlight some legends from the films, which is easy, as few films seem to spawn as many rumors, myths and legends as the Back to the Future franchise, particularly the scenes in the second film set in the future. 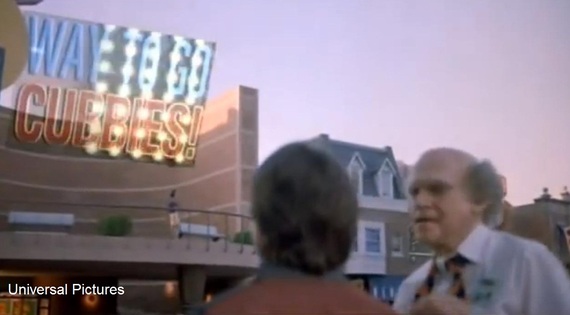 Whether it be the famed "hoverboards are for real" joke by director Robert Zemeckis (that way too many people took seriously) or the requests sent to Nike for self-tying sneakers like the ones Marty McFly wears in the film, people really took the scenes set in 2015 quite seriously. The world of sports also has a great many legends spinning out of those 2015 scenes in Back to the Future II, which makes sense, seeing as how the plot of the second film involved a Sports Almanac being used to travel back to the past to amass a fortune through gambling.

The most prolific sports legend about the film involves the (falsely) assumed notion that the film predicted that the Florida Marlins would win the 1997 World Series and/or the 2003 World Series (similar to how Seaquest supposedly also predicted the same thing). In reality, the film simply states that the Chicago Cubs defeated the "Miami Gators" in the 2015 World Series. As Major League Baseball did not yet have a team in Florida at the time of the making (or release) of Back to the Future II, the filmmakers likely deserve some credit for predicting Florida baseball, but I think it is safe to say that Florida baseball was seen by many of the time as an inevitability more than a possibility (and indeed, it was just four years later that the Florida Marlins joined the National League as an expansion team).

However, another sports legend about the film is about the bat that young Griff Tannen (grandson of the main antagonist of the trilogy, Biff Tannen) uses in Back to the Future II. Did they really think to have it autographed by Ken Griffey III before Ken Griffey Jr. ever became a superstar?

As you might expect, with the added development necessary before entering the Major Leagues, No. 1 draft picks in baseball do not have nearly the same success rate as their contemporaries in football, basketball and hockey. When a basketball No. 1 pick does not become a great player, it is seen as bad luck. If a baseball No. 1 pick does not become a great player, it is seen as almost typical. I featured this topic in an old Baseball Legends Revealed about the only player to be drafted No. 1 in the MLB draft twice (you can read that story here)! Amazingly enough, George Kenneth Griffey Junior, when he is elected to the Baseball Hall of Fame, will be the first No. 1 draft pick in the June amateur draft to be elected to the Hall of Fame (the draft began in 1965) (things look a lot brighter for the future, though, with Chipper Jones a cinch for the Hall and some other players having decent odds for enshrinement). So with those odds, when Griffey was selected first in 1987, he was certainly not a sure thing.

He did get a goodly amount of hype, though, especially as he was the son of three-time Major League All-Star (as well as a two-time World Champion and the winner of the 1980 All-Star Most Valuable Player award), Ken Griffey (who played most of his career for the Cincinnati Reds). When Griffey made the Majors in 1989 at the age of 19, he gained quite a good deal of media attention (he ended up finishing third in the American League Rookie of the Year voting, behind closer Gregg Olson and starter Tom Gordon). So it would certainly make some sense for the filmmakers of Back to the Future II (which was released in November of 1989) to make a little nod to Griffey (and his parentage) by having a teenager in 2015 wielding a bat autographed by Ken Griffey III.

The scene in question happens when Marty McFly is impersonating his own future son. He is tasked with keeping his son from going along with a robbery with "Griff" Tannen and his gang of hoods. Griff attacks him with a futuristic baseball bat. Later, after a chase involving "hoverboards" (skateboards that, you know, hover) Marty appears to be in trouble when his hoverboard gets stuck over a small pond (hoverboards don't work over water unless you have an independent power source). Griff's hoverboard DOES have an independent power source, so Griff prepares to zoom after Marty and smash his head in with his baseball bat. As he prepares to do so, we quickly see the baseball bat. You can definitely make out that there is a name on the bat, and it appears as though it is a K___ G______ and then either "Jr." or "III." Ken Griffey III certainly would fit the scene. 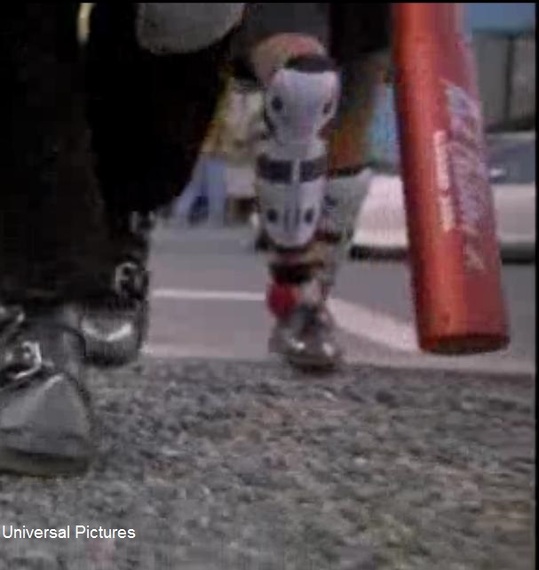 However, it is not Ken Griffey III.

Bob Gale, screenwriter of the film, actually specifically debunked this legend back at the end of last year. Here is Gale on the subject (from this following nifty Back to the Future website):

Griff's bat is signed by "Kirk Gibson Jr." The gag was inspired by Kirk Gibson's stellar year in 1988 and clutch walk off home run in that year's world series, which took place just a month before we started shooting Back to the Future Part II. The gag was concocted by production designer Rick Carter and me, in a discussion regarding what signature the bat should have on it. Neil Canton [producer of the film -- BC], being a die-hard Giants fan, went along with it, seeing the humor in it, despite his total disdain for the Dodgers.

So there you go!

Amusingly enough, in 1994, Griffey Jr. did, indeed, have a son. And he was, in fact, named George Kenneth Griffey III, although they decided to call him "Trey" as his nickname, which is what he goes by today. He did not decided to pursue a career as a baseball player (he did play football in college, though).

Thanks to Bob Gale for the great information!

Be sure to check out more baseball legends at Sports Legends Revealed here.

Entertainment Back To The Future Ken Griffey Jr.