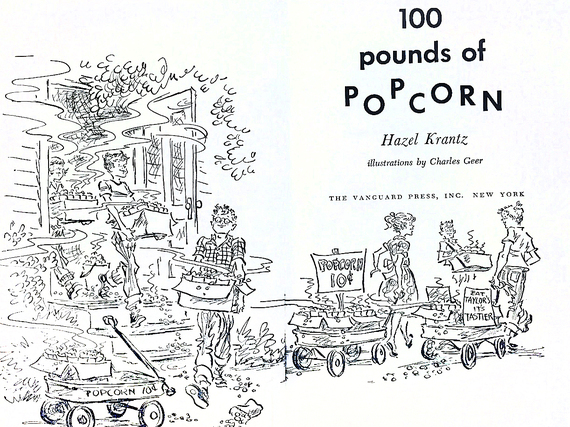 Not actual popcorn, mind you, but a book I read in the second grade called "100 Pounds of Popcorn," written by Hazel Krantz. Reading it again now, it's a pretty standard Beverly Cleary style children's story featuring a whole host of wholesome 50's characters (think "Leave it To Beaver"). But what sets this particular book apart from others I read as a child is that its plot revolves entirely around what it takes to be a successful entrepreneur.

The book follows 11-year-old Andy Taylor as he attempts to start his own popcorn business after chancing upon a giant burlap sack of unpopped kernels that fell off a passing truck.

After he finds the popcorn, Andy calculates he can make $225 from popping it and selling it at 15 cents per bag. Of course, he fails to calculate all the expenses that go into running his business. It takes butter and oil to pop the kernels, not to mention cardboard and paint for advertising signs and work space in a local garage.

After a quick lesson about collateral from his father, he enlists his friends to help him do odd jobs around town to raise the necessary operating expenses. Along with his new partners, he sets about popping, but he loses a large portion of the kernels to spoilage and is forced to lower his price to 10 cents per bag due to poor initial sales.

The Taylor Popcorn Company ultimately weathers an entire summer of ups and downs. Finally, the partners are ready to go back to being kids and decide to liquidate the business. Andy prepares for his big payday, but once he shares the profits with his partners he turns a profit of just $10 (nine after he persuades his partners to donate a buck each to a needy Cub Scout troop).

Dejected, Andy questions whether all the hard work was really worth it - until a friendly bank teller reminds him that $10 is a lot of money for a kid (especially in 1961). In fact, any business man would be lucky to turn that kind of profit off his meager initial investment. With his profits, Andy buys a microscope. It's not the expensive telescope he had his eye on - but it sparks his next big idea, becoming a great scientist.

Before I even knew what the word entrepreneurship meant, "100 Pounds of Popcorn" taught me that anyone with a big idea (even something as basic as selling popcorn) can succeed so long as they:

Yes, this book is a simple feel-good story, but it opened up the world of being an entrepreneur for me when I was just eight years old. I have never seriously considered doing anything else since!

I had Andy Taylor and "100 Pounds of Popcorn" to inspire me. What inspired you to become an entrepreneur?