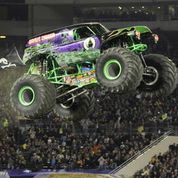 Grave Digger is the undisputed fan favorite of the Monster Jam circuit, appearing in nearly every Monster Jam across the country. Although one of the true monsters of Monster Jam now, Grave Digger had humble beginnings as the old, beat-up truck of Dennis Anderson. Friends would give him grief over his truck and ask him what he planned on doing with it. Dennis would tell them that he would dig their graves with it one day eventually spray painting "Grave Digger" on the side of his truck.

Today, Grave Digger is so popular that there are eight Grave Digger trucks and eight teams to drive and maintain them. Otherwise, fans attending Monster Jam wouldn't be able to see Grave Digger at nearly every show and might need to wait up to four years between Grave Digger sightings. 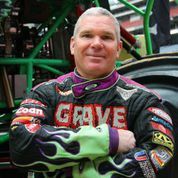 Pablo Huffaker, one of Grave Digger's eight drivers, is a legend of Monster Jam. He's been driving Monster Trucks for 33 years and performs in shows across the country about 20 weekends a year. Pablo got started in 1980 when he built his first Monster Truck to promote his shop, RaceSource, Inc. which he still operates when not appearing on the Monster Jam circuit. 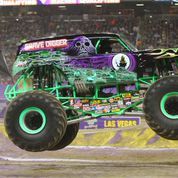 When Huffaker started driving monster trucks he started slowly, beginning with driving over cars. At first, that was enough to wow the crowd, but now Huffaker uses Grave Digger to jump over cars, getting his truck up to 40 feet in the air. One of the most impressive things about his skill is that he doesn't practice outside of his Monster Jam performances - if he wants to try something new he does it in front of an audience which likely has no idea they are witnessing a never-before attempted feat.

Huffaker has won hundreds of awards at Monster Jams over the years but his favorite event is the Freestyle where he gets to do what he loves to do. He loves the challenge of seeing how he stacks up against other drivers. Even with all of his experience, Huffaker likes seeing what other drivers are doing since only the best of the best are invited to participate in Monster Jam, which he describes as the NFL of the Monster Truck world.

Huffaker also likes freestyle to see how far he can take the "wow" factor for his fans, who are this favorite part of Monster Jam. He loves seeing homemade Grave Digger posters, meeting his fans, and even occasionally giving one of his awards away to a lucky kid who really can't believe he gets to take a Monster Truck award home.

When not on the road Huffaker doesn't leave Monster Trucks behind. He keeps Grave Digger in his shop in Texas and spends his time building Monster Trucks. His latest creation, Backwards Bob, just debuted on January 3rd. But, after just one performance, Backwards Bob was destroyed when its transport vehicle caught on fire. Huffaker is not deterred, though, and will rebuild.

If Huffaker starts to miss Grave Digger when he's not performing he can still reenact Monster Jam. His wife is an avid collector of Grave Digger toys. She has too many to count but Huffaker likes the Hotwheels best.