The existence of a mysterious ancient human lineage and the possibility that the earliest humans were actually all one species were among the human-evolution-related discoveries of 2013. Other breakthroughs include the sequencing of the oldest human DNA yet.

Here's a look at what scientists learned about humanity and human origins this year:

Recent analyses of fossil DNA have revealed that modern humans occasionally had sex and produced offspring not only with Neanderthals but also with Denisovans, a relatively newfound lineage whosegenetic signatureapparently extended from Siberia to the Pacific islands of Oceania.

This year, hints began emerging that another mystery human lineage was part of this genetic mix as well. Now, the first high-quality genome sequence from a Neanderthal has confirmed those suspicions.

These findings come from Denisova Cave in southern Siberia, where the first evidence of Denisovans was discovered in 2008. To learn more about the Denisovans, scientists examined DNA from a toe bone unearthed there in 2010.

The researchers found that the fossil belonged to a Neanderthal woman. Her DNA helped refine the human family tree, as it revealed that about 1.5 to 2.1 percent of the DNA of modern people outside Africa is Neanderthal in origin, whereas about 0.2 percent of DNA of mainland Asians and Native Americans is Denisovan in origin. [Top 10 Mysteries of the First Humans]

The scientists also discovered that the Denisovans interbred with an unknown human lineage, getting as much as 2.7 to 5.8 percent of their genomes from it. This newfound relative apparently split from the ancestors of all modern humans, Neanderthals and Denisovans between 4 million and 900,000 years ago, before these latter groups started diverging from each other. It's possible that this mysterious lineage could even be Homo erectus, the earliest known undisputed predecessor of modern humans. However, there are no signs that this unknown group interbred with modern humans or Neanderthals.

Genetic analysis also revealed that the parents of this Neanderthal woman were closely related — possibly half-siblings, or another close relative. (Inbreeding may have been common among early humans — it remains uncertain as to whether it was some kind of cultural practice or whether it was unavoidable due to small community populations at the time.)

Were earliest humans all one species?

Modern humans, Homo sapiens, are the only living member of the human lineage, Homo, which is thought to have arisen in Africa about 2 million years ago at the beginning of the Ice Age. Many now-extinct human species were thought to once roam the planet, such as Homo habilis, which is suspected to be among the first stone-tool makers; the relatively larger-brained Homo rudolfensis; the relatively slender Homo ergaster; and Homo erectus, the first to regularly keep the tools it made.

The level of variation seen in Homo fossils is typically used to define separate species. However, analysis of 1.8-million-year-old skulls excavated from the Republic of Georgia revealed the level of variation seen among those skulls was about the same as that seen among ancient African Homo fossils. As such, researchers suggest the earliest Homo fossils may not be multiple human species, but rather variants of a single lineage that emerged from Africa. In other words, instead of Africa once being home to multiple human species such as Homo erectus, Homo habilis, Homo ergaster and Homo rudolfensis, all of these specimens may actually simply be Homo erectus.

The testing of the oldest known human DNA added more evidence that human evolution was complex.

The genetic material, some 400,000 years old, came from a human thighbone unearthed in the Sima de los Huesos, or "Pit of Bones," an underground cave in northern Spain. Until now, the previous oldest known human DNA had come from a 100,000-year-old Neanderthal from a Belgian cave.

The fossils unearthed at the site resembled those of Neanderthals, so researchers expected the ancient DNA they analyzed to be Neanderthal as well. Surprisingly, the DNA revealed that this fossil's closest known relatives were not Neanderthals but Denisovans. This finding is strange, scientists said, because studies to date currently suggest the Denisovans lived in eastern Asia, not in western Europe, where this fossil was uncovered. One possible explanation is that a currently unknown human lineage brought Denisovan-like DNA into the Pit of Bones region, and possibly also to the Denisovans in Asia.

Evolution of tool use

A key anatomical feature of the modern human hand is the third metacarpal, a bone in the palm that connects the middle finger to the wrist. A little projection of bone known as a styloid process in this bone helps the thumb and fingers apply greater amounts of pressure to the wrist and palm. Researchers had thought the styloid process was a relatively recent feature, perhaps evolving close to the origin of modern humans. However, scientists have discovered a 1.4-million-year-old fossil that possesses this vital anatomical feature, meaning it existed more than 500,000 years earlier than it was previously known to have existed and was perhaps fundamental to the evolution of the whole genus Homo, not just modern humans. 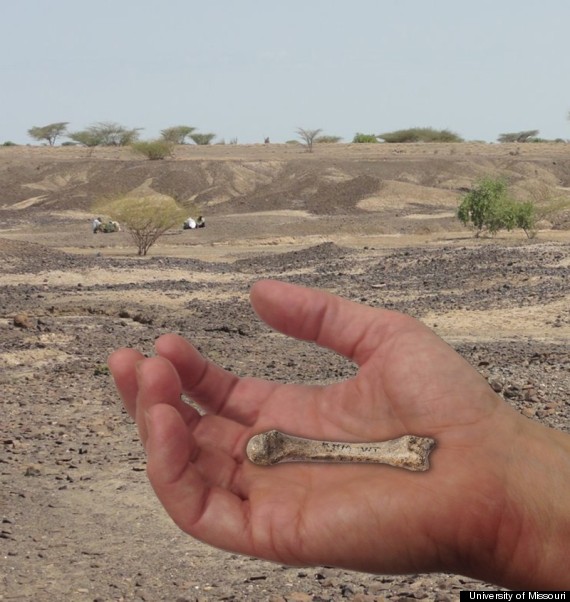 Researchers have discovered a 1.42-million-year-old hand fossil that possesses the styloid process, a vital anatomical feature that allows the hand to lock into the wrist bones, giving humans the ability to make and use complex tools.

This hand bone may not be the only key trait for tool use that evolved near the origin of the human lineage. Humans are the only species that can throw with great speed and precision, and scientists found this ability first evolved nearly 2 million years ago with anatomical changes to the shoulder, arm and torso. This advance likely boosted the hunting prowess of now-extinct human ancestors, helping them effectively and safely kill big game.

In 2013, researchers also made important discoveries about Neanderthals, modern humans' closest extinct relatives. For instance, analysis of a Neanderthal tomb in France suggests that, like modern humans, Neanderthals may have intentionally buried their dead. The new findings are further evidence that Neanderthals might have possessed complex forms of thought, enough for special treatment of the dead. 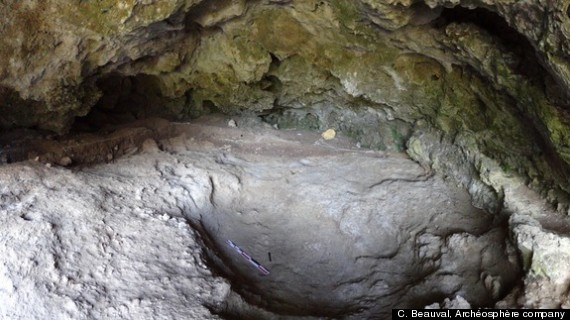 A pit in a French cave that may have been an intentional grave dug by Neanderthals to bury one of their number.

In addition, a cache of Neanderthal fossils discovered in a cave in Greece suggests the area may have been a key crossroad for ancient humans. The age of these fossils suggests Neanderthals and other humans may have had the opportunity to cross paths there, and even interact, the researchers added.