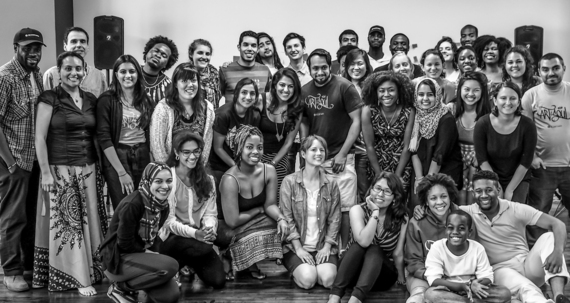 We are still fighting the myth that interfaith children grow up to be lost and confused. Rev. Erik Martínez Resly is an interfaith child who grew up to become an inspired community leader. I met Erik at the Parliament of the World's Religions this year, and later interviewed him about his work as Lead Organizer of The Sanctuaries, a racially and religiously diverse arts community in Washington, DC.--SKM

1. How would you describe your own religious family history and journey?

I grew up in a mixed religious family, Jewish and Christian, both practicing. My parents embraced the tension, encouraged me to experience both ritualistic worlds, find my own place of commitment and conviction. Living overseas in Germany, we attended the Unitarische Freie Religionsgemeinde, a free-religious community that served mixed families like our own, some Muslim-Christian, others cross-cultural in non-religious ways. As a teenager, I was "religious but not spiritual," in the sense that I attended services but didn't necessarily identify with the beliefs and practices in an intimate and immediate way.

However, in my last years of high school, all of that changed during a particularly difficult struggle with chronic illness. I was stretched and shoved to my physical and spiritual limits, and forced to make a decision about how to face death. I chose life, in the sense that I came to appreciate the small moments of rupture and revolution, the seeds of the spirit that broke through the pain and hardship. I will never forget the one time I was in great pain wrapped in covers on my hospital bed, and I all of a sudden had this urge to pray. I don't know where it came from! I neither really knew how to pray, nor whom I would be praying to. My illness didn't magically heal, but I felt the power of something or someone holding me up, giving me the strength and courage and resilience to push on. "Maybe that's God," I thought to myself, intentionally leaving the question open. It was a question that I would carry with me for many years, and one that I continue to live with to this day. 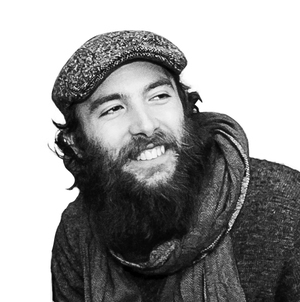 2. What inspired you to found The Sanctuaries?

After flirting with a career in international politics, I came to realize that institutions are only as humane as the people behind them. So I decided to devote my life to supporting the people behind them -- empowering people to live as their best selves. I sought graduate training in religious pluralism at Harvard Divinity School, and was ordained as a Unitarian Universalist minister.

At the same time, I quickly realized that our inherited forms of organized religious community needed to shift to catch up with the changing realities of what it means to be a younger person in the economic context and cultural worlds that we find ourselves in. As an artist and activist, I found this to be even more pronounced within circles of creative and conscious people, who too often described organized religion as something that burned or bored them. Let me be clear: I have deep respect for more traditional religious communities. Nevertheless, there is an ever-growing population of younger people who do not feel connected to or well served by these institutions. And so, I felt that we needed to broaden the bandwidth on what a spiritual community could look like.

Towards the end of 2012, I spent six months meeting with people -- at cafes, bars, gallery openings, music shows, and everything in between. I wanted to know what type of community they would value, what would be worth their time, what was missing in their lives. The Sanctuaries was born in 2013 as a collective response to those questions.

People told me that they sought a community that truly reflected the racial and religious diversity that exists in this city, and an opportunity to build lasting friendships with people they otherwise wouldn't meet. People also told me that they yearned for a spiritual community that would welcome them as they are, without drama or judgment, and that would celebrate their questions, curiosities, and doubts. It would be a place where devout Muslims and committed Christians could grow spiritually alongside people who do not claim a specific tradition, but who still strive to live a life of meaning and purpose. Lastly, people told me that they wanted to help build a creative community that encouraged personal creative expression and artistic collaboration, across mediums, in service of a higher cause. A place where art and soul fuel social change.

3. So what does this work at The Sanctuaries end up looking like?

The Sanctuaries hosted more than 60 gatherings last year. One highlight was being invited to perform at the Parliament of the World's Religions in Salt Lake City, a gathering of over 10,000 people from around the world, last fall. Another highlight was working with fifteen of our artists of diverse racial and religious backgrounds to record a seven-track album, "The Mixtape," that sold out its first pressing. The album fuses hip hop and soul with folk and classical Indian ragas, incorporating spoken word poetry, thumping beats, soaring vocals. It's raw, and sacred.

4. Where do you see The Sanctuaries heading next?

We're about to launch our Collective, which will equip engaged citizens to harness the power of their creative and spiritual lives to promote social change in their own communities. We'll host a three-month pilot this spring, free of charge, where ten creative people of diverse backgrounds and mediums will form a community, and receive studio space and supplies, tools for deepening their spiritual voice and artistic craft, and the opportunity to learn from and contribute to a local justice campaign. Applications are open now and will close on Friday, January 15th.

The Collective is part of our larger mission to bring new perspectives to the social problems that we face. The world desperately needs creative leaders of diverse backgrounds who are spiritually grounded and socially conscious.

5. What do you think makes this kind of community powerful for younger generations who have no interest in traditional religious institutions?

The Sanctuaries is an unapologetically inclusive and relevant community. It's real and raw -- a space to creatively explore what organizer Osa Obaseki, Co-Founder of our Collective, calls "spiritual gangsta shyt." There's an appreciation for the wisdom of ancient traditions, alongside a desire to figure out what it means to live well in the here and now.

Members of our community often tell me that this is the first community they've found that welcomes their whole selves -- the creative and the spiritual, the questions and the convictions, the successes and the shortcomings. We don't need to look alike or think alike to love alike.

Let me also say: partnership is powerful. It's a form of support without suffocation. It's a way to mutually commit to a shared cause, and collaboratively work towards a shared vision. I prize the partnerships we have with local religious institutions, as well as with small businesses, arts organizations, and justice campaigns in the area. They don't try to do what we do, and we don't try to do what they do. Rather, we share stories, learn from each other, find ways to share resources and celebrate shared successes. I truly believe: we're better together.

6. How do you think growing up in an interfaith family helped to form your approach to religion and the world?

My family taught me to appreciate difference and embrace contradiction. Sometimes you can't come to a resolution that pleases everyone. Sometimes life is just too complicated for easy answers. Rather than fight these impasses, I've learned to welcome them.

So often, finding an answer closes down curiosity. It stops a journey of inquiry, and sends everyone home, puffed up and proud. Points of difference, on the other hand, open up new questions and demand new perspectives. They force us to look at things differently. They stretch our minds. They expand us.

That's not to say that answers are unimportant. They're guideposts along the journey. But growing up in an interfaith family, I came to know a God who refuses to be put into a box, to be mobilized to reinforce our sectarian divisions, to be reduced to our human prejudices.