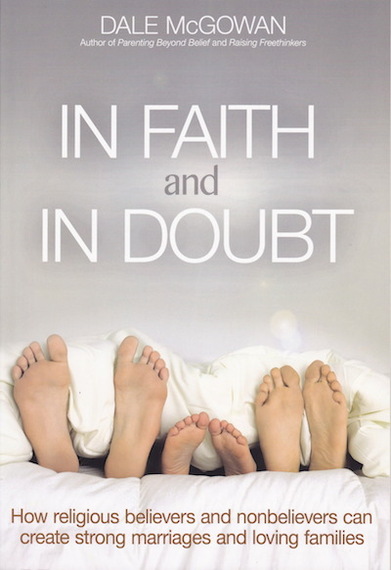 Just about every time I give a talk on my book Being Both: Embracing Two Religions in One Interfaith Family, someone will raise a hand to ask me about secular/religious mixed marriages and families. So I welcome the arrival of an excellent new book entirely on this topic, In Faith and in Doubt: How Religious Believers and Nonbelievers Can Create Strong Marriages and Loving Families. Dale McGowan, a knowledgeable guide who wrote two earlier books on secular parenting, has written a sophisticated, thorough, and eminently readable book on a topic of growing importance.

In the Jewish community, there are agnostics and humanists and atheists who are religious practitioners. So I don't view religion in the context of a believer/nonbeliever binary. (Also, in my experience, interfaith kids like me tend to resist "either/or" thinking). Belief is not always central to religious practice, especially in Judaism and Dharmic traditions (Buddhism, Hinduism). The believer/nonbeliever binary often signals a Christian perspective (although not all Christians fit neatly in one box or the other). When asked about belief, my mind runs to questions rather than answers: Belief in what, exactly? What is God? What if you find Jesus inspirational but not supernatural? What if you feel spiritual but reject dogma? How sure do you have to be?

I was happy to discover that McGowan's book takes such questions and nuances and complexities into account. In Faith and in Doubt provides a great companion to my book Being Both, and will be helpful to many of the same families, in different ways. While Being Both was the first book written by an interfaith child on raising interfaith children with interfaith education, inevitably my perspective is more Jewish than Christian. McGowan, on the other hand, was raised as a Christian, married a Christian, and now lives in Atlanta. Many of the couples he profiles live in the South, with one or both spouses coming from a religious (even evangelical or fundamentalist) Christian household. So his book is going to be particularly helpful to people from strong Christian backgrounds (or those married to them) in "mixed" marriages of all kinds (whether married to atheists or Jews or Hindus).

In Faith and In Doubt is based on McGowan's original survey of almost 1000 people in secular/religious marriages. In general, this book focuses more on the marriages than on the kids, and is filled with practical strategies for success in relationships and parenting. (McGowan did not survey or interview the children). Chapters filled with helpful advice include What Helps and What Doesn't, Extended Family, Communication and Respect, and a chapter on graceful divorce.

McGowan weaves in stories -- funny, poignant, enlightening -- of couples in secular/religious marriages. He stands firmly in the "friendly atheist" (as opposed to "angry atheist") camp, and his tone is respectful when writing about both the secular and religious partners in these marriages -- probably at least in part because he spent many years married to a Christian. McGowan includes cases in which both spouses start out as Christians and one loses faith, in which the couple started out mixed and one spouse shifts to join their partner, and quite a few happy marriages which started out as mixed and just stayed that way. Moving back and forth between the stories and the extensive survey questions detailing how these marriages fared over time, McGowan is able to make new and important observations and recommendations.

Ultimately, McGowan strongly supports my position (he is a longtime reader of my blog) that children can withstand, and even benefit from, exposure to the different beliefs and traditions of two parents. He urges interfaith literacy for all children, including study of Bible stories, world religions, and "the religious backgrounds of their extended families and what their relatives (including their parents) actually believe." McGowan states, "Whether religious or nonreligious, both parents should share the beliefs and practices of their worldviews with their kids."

Almost anyone who is a member of a family (and that's everyone) could find this book revealing, inspiring, and helpful. McGowan calls the children of mixed marriage "lucky" because they receive the "tremendous gift" of being encouraged to choose an "inspiring worldview that fits their vision of themselves." I often argue (as do McGowan, and many others) that every marriage is mixed, since no two individuals share identical beliefs or practices. If that is so, then all our children are lucky, as long as we provide them with interfaith literacy, and encourage them to wrestle with big questions. I hope that In Faith and In Doubt will help more parents to dare to provide this type of education to children.