Back in 2004, after nearly two decades as a burned out cake designer, and approximately the same amount of time as a person who'd do anything other than cake design, I finally embraced my lot. Cake: I wish I could quit you; but, I couldn't... I also couldn't carry on with the cycle of endless buttercream cakes, rinse spatula, repeat.

As a new site, I shopped my wares around for link exchanges and a well respected cake pioneer told me that she "loved" my work, but I "had" to remove the dead rat cake! I knew if a cake could evoke such a strong reaction, I must be on the right path.

Over the years I developed a reputation for the off-beat, bizarre and sometimes gross cakes. One dead rat cake begat a severed head which led to a road kill squirrel , and so on and so on.

In the Fall of 2011, I took part in a gallery show with cakes inspired by horror movies. The baby from Eraserhead, a platter of fresh rat and tomatoes from Whatever Happened to Baby Jane?, maggot covered chicken leg from Poltergeist, all eliciting both delight and disgust.

I may be one of the only cake artisans for whom the word "yuck" is high praise.

Twisted Cakes (Harper Design, $19.99), deliciously evil designs for all occasions, is in a sense, a book an entire career in the making. Of course the dead rat had to make a sentimental appearance...

The book, is a collection of the unexpected, going to places food rarely goes. I illustrated how the bizarre can sometimes be beautiful and even humorous. Inspired by anatomical specimens, medical oddities, horror films, even "Wacky Packages", each cake appeals to my offbeat sensibilities in their own unique ways.

I will admit, however, that after crafting the maggot covered candy bar cake, even I may never be able to eat a chocolate bar the same way again. 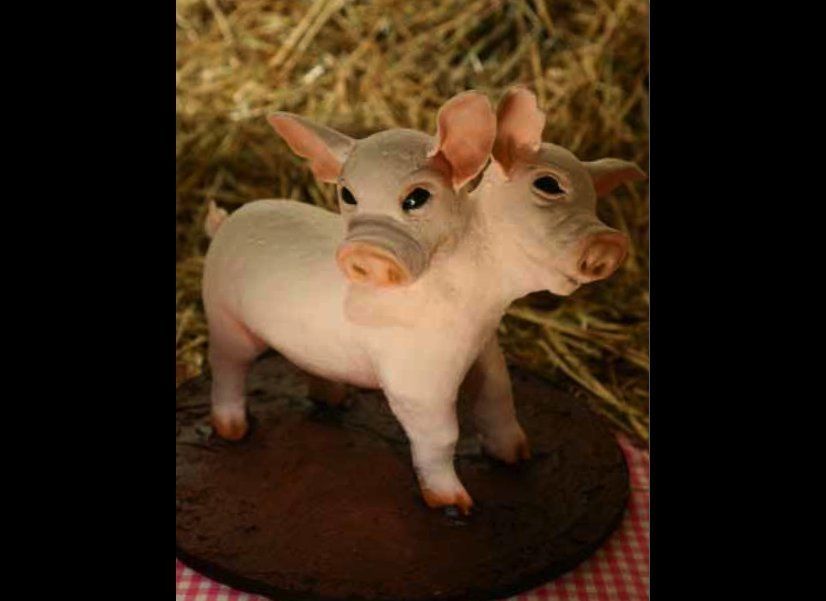 1 / 9
Siamese pigs
The term Siamese is derived from a famous pair of conjoined twins, Chang and Eng Bunker of Siam. They spent a decade exhibited as curiosities, then used their earnings to buy a plantation in North Carolina, where they lived out their days. Like the Bunkers, these piglets spend their days on the farm as happy as two pigs in chocolate mud can be.