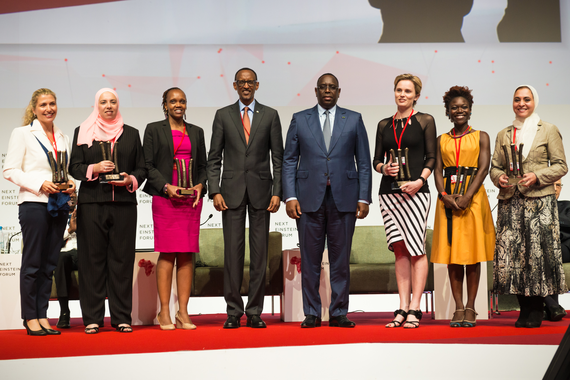 Photo: H.E. Macky Sall, President of Senegal and H.E. Paul Kagame, President of Rwanda with the Next Einstein Forum's six female fellows at the launch of the NEF Global Gathering.

From March 8-10, African scientists, government officials, academics, and professionals convened in Dakar, Senegal for the Next Einstein Forum (NEF), "Africa's Global Forum for Science Connecting Science to Humanity." The first assembly of its kind on the continent, the platform brought together leading thinkers in science, policy, industry and civil society in Africa to leverage science to solve global challenges. Discussing various topics such as science diplomacy and policy, the NEF selected and recognized 15 of Africa's best young scientists and technologists -- all under the age of 42 -- who represent the young generation of African researchers and game changers that are contributing their ideas to the international research community.

An initiative launched by the African Institute for Mathematical Sciences (AIMS), in partnership with Robert Bosch Stiftung, a prominent German philanthropic company, and Johnson & Johnson Innovation, attendees of the forum included leaders from the fields of science, policy and civil society, and also heads of states such as President H.E. Paul Kagame of Rwanda, and President Macky Sall of Senegal. Aiming to engage Africa in the global marketplace, the impetus of the NEF centered on a critical need to solve one question -- why is scientific talent and innovation being overlooked on the African continent?

Based on data, the answer to that question seems pretty clear. According to the World Economic Forum, Africa produces only 1.1 percent of global scientific knowledge and has just 79 scientists per million inhabitants; unlike Brazil and the United States where the ratio is 656 and 4500 scientists per million inhabitants. While government funds are usually spent on development, infrastructure and security in Africa, little investment is allocated to scientific discovery and innovation; thus pushing African scientists and researchers who are trained on the continent to continue their studies at non-African universities and job placements.

While the data shows there are not many African scientists, it does not mean STEM research is not being produced and overall, African science has been seemingly overlooked and ignored. This is why the NEF is investing in the world's largest pool of untapped genius to showcase and increase the pipeline of scientific talent -- its young people -- coming from the continent; ultimately penning Africa's scientific technological renaissance and shattering stereotypes surrounding science capacity in Africa and the bias towards science outside the continent. An example of such bias can found in a 2014 ruling on a lawsuit against the Kenya Medical Research Institute (KEMRI). The Nairobi Industrial Court agreed that six Kenyan doctors in a global scientific research partnership had been purposefully overlooked for promotion and training, while their European counterparts were perpetually admitted into these capacities.

"Often, Africa is portrayed in certain stereotypical terms, and this includes how the world views African science," said Tolu Oni, a 2015-2016 NEF fellow and scientist. "The NEF is essentially addressing this issue to say that there is a lot of incredible science and scientists from within the continent who looking at the key societal challenges and addressing them with various solutions," Oni said.

"We are not only addressing issues on an African scientific stage, but a global scientific stage as well and showing that collectively as a continent, we are dedicated to using science as a tool to advance our society," Oni continued.

Hailing from Nigeria, Oni's research focuses on the intersections of urban epidemiology and public health; explores the interactions between chronic infectious and noninfectious diseases; and the impact of the physical and socioeconomic environment on the health profile of populations living in unplanned urban settings. A senior lecturer at the School of Public Health and Medicine at the University of Cape Town, Oni is working on establishing the Research Initiative for Cities Health and Equity (RICHE), an interdisciplinary research programme for urban health research in Africa that will address urban health inequity to identify creative strategies to address complex population health. 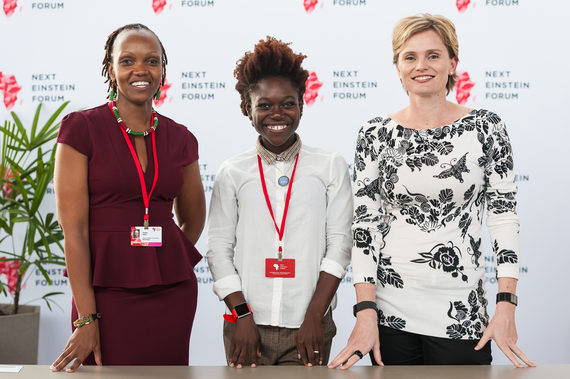 Photo: African women in STEM are at the forefront of a budding science renaissance. Notably, women make up 40 percent of the inaugural Next Einstein Forum's class of 15 Fellows, representing Africa's best and the brightest scientists. Left to Right: Evelyn Gitau, Kenya; Tolu Oni, Nigeria; and Alta Schutte, South Africa.

Alta Schutte, also a current fellow and unit director of the Medical Research Council (MRC) in South Africa, reinforces the notion that there has always been African brilliance in science and beyond, but needs to be a multisectoral framework implemented on the continent to foster it.

"The NEF is great because you get to see the beautiful excellence that we already have in Africa," Schutte said. "There is an amazing commitment to increasing African scientists on the global stage, and to see the willingness and the enthusiasm of young scientists is incredible. We know we have excellence and we know the talent is out there but we need the environment to create it," she said.

"If we can get that commitment from government leaders to enhance science and technology in Africa, we can see more scientific innovations and projects," Schutte said.

After her father's near death experience, Schutte's work centers on hypertension and heart disease in African populations, and is working to reduce the number of people in Africa with hypertension. Aiming to understand biological markers, health exposures, and the ineffectiveness of hypertension drugs in Black populations, she currently leads the African-PREDICT study that examines black and white South Africans' eating habits and hypertension trends.

Gender equity in science is also an integral element on the NEF's agenda, as the forum is committed to advancing and showcasing the role of women in science, technology, engineering and mathematics (STEM). According to UNESCO, only 30% of researches in sub-Saharan Africa are women. In order to increase gender representation and parity in science, the NEF has committed to having 40 percent of each cohort of NEF fellows be women, while featuring profiles of eminent women in science as well as research that explores the gender gap in STEM fields.

"The short answer is 52 percent of the population of Africa are women and if we don't have a proper reflection of the demographics, we are neglecting women as a whole on the continent," said Evelyn Gitau, the program manager of the Grand Challenges Africa initiative funded by the Bill and Melinda Gates Foundation driving research and development in Kenya and also a 2015 - 2016 NEF Fellow.

"It is imperative that women are put in the center of scientific development in Africa to ensure that no one gets left behind," Gitau said.

With a focus in cellular immunology, Gitau's research focuses on malaria and the diagnosis of treating malnourished children in Kenya. Leading a movement to personalize medicine, Gitau hopes to develop cheap, point-of-care diagnostic methods that can better stratify malnourished children and to inform alternative clinical management for those that remain at risk of death due to infection despite nutritional rehabilitation.

Believing that the ability of African countries to develop themselves in a sustainable way depends in large part on its capacity to create scientific knowledge, the NEF's 2015-2020 outcomes include supporting 50 young scientists across Africa by providing them with resources and networks; producing 1000 young STEM ambassadors; having 200 leading scientists from the African Diaspora return to the continent to partake in Africa's scientific renaissance; bringing 100 Nobel Laureates to Africa to inspire NEF Fellows; and engage 100 million young people through NEF media campaigns and online talks.

Do you believe that the next Einstein will come from Africa? If so, you can sign the petition in support of NEF's movement.

Also, read the declarations that have come from the Forum.