The latest item to hit the shelves of Home Depot has the potential to solve one of biggest annoyances of do-it-yourself home repair: having to go to the hardware store in the first place.

Earlier this month, the world's largest home improvement chain announced the start of a pilot program to sell MakerBots, described by the manufacturer as a type of professional-grade 3-D printing machine, in a dozen stores following a three-month period of online-only sales. The MakerBot printers, which range from a compact $1,375 model to a high-end $2,899 version, went on sale July 14 in Chicago and New York City-area stores, as well as Home Depot locations throughout California.

"As we were thinking about a partnership with MakerBot, we're always looking for new innovation," Joe Downey, Home Depot's online merchant for tools, told HuffPost by phone. "It's really about bringing about new innovation to customers." 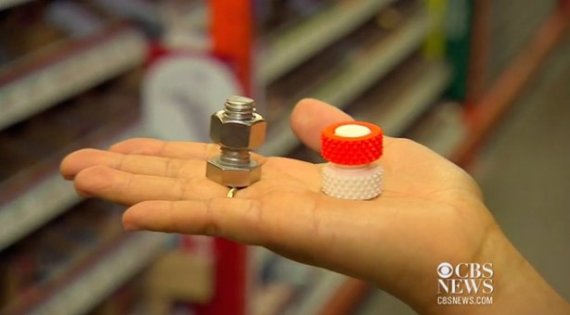 3-D printed nuts and bolts from a MakerBot machine.

3-D printers can whip up everything from vagina selfies to handguns, but Home Depot envisions its customers using the MakerBots for decidedly more practical applications.

"Imagine a world where you can 3-D print replacement parts and use 3-D printing as an integral part of design and building work," MakerBot CEO Bre Pettis said in a statement.

In demonstration kiosks at the 12 pilot locations, Home Depot employees can show customers how to print items like replacement parts and product prototypes, CBS reports.

While a MakerBot can, in theory, churn out many of the same items that people go to Home Depot to buy, the retailer doesn't seem worried about 3-D printing itself into obsolescence.

"We're comfortable with the partnership," Downey said, noting that customers have "economies of scale to consider." In other words, a MakerBot owner would be unlikely to print all her own screws or bolts for a large project.

Besides, said Pettis of the current fleet of MakerBot printers, "You can't use it as a hammer."

Downey said customers typically use the printers for personalization projects, like a Chicago father who Downey said purchased a MakerBot to print custom furniture for his daughter's dollhouse. 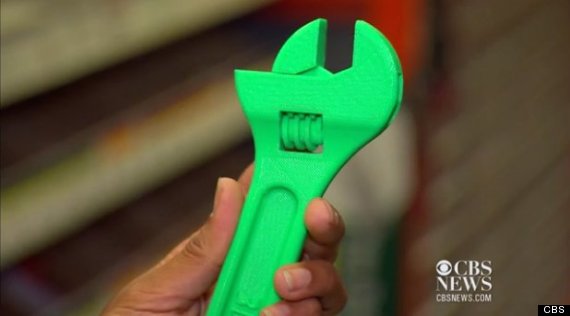 Users can print tools like this adjustable wrench with a MakerBot.

The current generation of 3-D printers are still relatively slow -- printing an item the size of a Lego brick can take roughly half an hour -- and customers would still need to go to a store to purchase the (often costly) raw materials.

"Ten years from now, it will be quite common for people to have 3-D printers in their homes," Tim Shepherd, an analyst with the U.K.-based research firm Canalys, told Bloomberg last week.

In addition to Home Depot, companies like Amazon, Staples and Dell have joined the ranks of 3-D printer retailers.

Touted as a "second industrial revolution," 3-D printing comprises a $3 billion industry that has grown 600 percent in the past decade, Forbes reports.

This article has been updated with additional information about the characterization of the Makerbot printers.