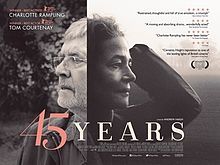 The film's title 45 Years is deceptive since watching it feels like a hundred, even though it ostensibly takes place over the course of six days. At the end of each day amazingly little happens of either esthetic or existential interest in the life of an aging childless couple Kate (Charlotte Rampling) and Geoff Mercer (Tom Courtenay). Andrew Haigh's direction captures the claustrophobia of the well kempt bucolic existence that characterizes the Mercer's life populated as it is with all the electronic conveniences that upscale retirees with pensions in rural areas of England might be expected to possess. In fact, the comfortableness of the existence is almost haunting since it bespeaks a certain inevitability; it's very much like the conversations between the couple with their subdued expressions of caring that border on a kind of helplessness. The sixth and last day will be the long anticipated wedding anniversary and it's here that the film goes awry. As if to look for problems Geoff digs up a past which will be the basis of Kate's eventual feeling of betrayal, artfully dramatized by Rampling in a final scene of repudiation that her husband doesn't even notice. It's this very turn of plot in which the volume is turned up on something which wasn't even an infidelity that seems so implausible. Not to over interpret a fictional creation, but isn't the point not so much deception as finding a signpost in an otherwise monotonous and meaningless existence? And why don't the characters and/or their director at least acknowledge the fact that they're creating a tempest in a teapot? The sequence of the film that really is the most telling is one of lovemaking. No one wants to see the feckless attempt at consummation by an elderly couple (she played by a once glamorous actress with now rail thin legs, he by the one time star of The Loneliness of the Long Distance Runner now sporting a nice front porch) but that makes it all the more interesting. Yet after failing Haigh seems content to let Geoff simply roll off his wife and fall asleep. The fate of sexuality is, of course, the big question of senescence. The neurogenic pathways once programmed for desire are like highways without cars. The missing fuel is, naturally, libido and how are the Mercers to bide the their time? It's a question that 45 Years unfortunately leaves unanswered.