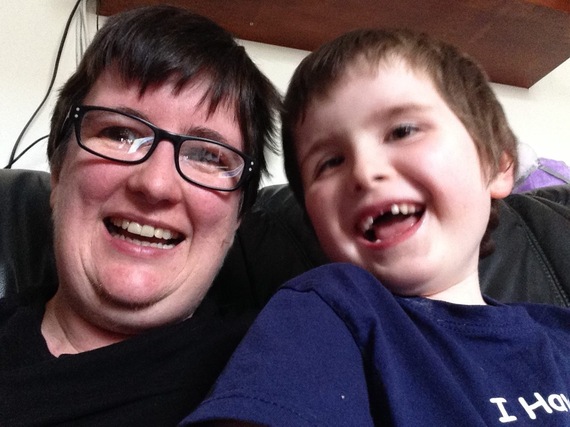 The first diagnosis my son ever had was "global developmental delay" and like so many I understood this to mean he was a little bit behind his peers but would probably, in time and with support, be just fine.

He was only 1 year old when we were told he was struggling and not meeting key milestones like sitting up unaided, making attempts at speech and playing with toys.

I was in denial. I was sad.

I stopped taking him places (probably one of the worst things I could have done in hindsight) and I ploughed through each day willing him to learn skills others mastered with ease. I blamed myself. I cried myself to sleep at night. I sang to him, read to him and played with him for hours, but very little changed.

As years went on we collected diagnosis like a stamp collector collects stamps.

The term developmental delay is now slowly being replaced by his doctors to 'learning difficulties'and I have come to accept now that he never will catch up with others.

Over the last seven years I have found so few people have any understanding of what developmental delay actually means. It is such a huge, all encompassing, spectrum ranging from children with mild delays in some areas to children of school age still unable to weight bear or even support their own head. It covers children who are behind in reading and writing, to children who are fully wheelchair bound and unable to speak. It can be a stand alone diagnosis or the effect of other more complex issues like cerebral palsy, autism, Down's syndrome and many complex genetic conditions (some we have yet to name!)

Though every child and situation is different, here are a few facts about developmental delay as it applies to my son:

1. Some children DO catch up, other's don't.

My beautiful son, will forever be developing at their own unique pace and time and will always need support right into adult life.

2. As a child gets older the term developmental delay is likely to disappear and instead be replaced by some form of learning difficulty or perhaps simply referred to in terms of severity of other conditions such as severe autism.

This does NOT mean the child no longer has delays just that the way of describing those delays has changed.

3. Although my son's development is way behind others there is so much about him that will always be "age appropriate."

For example he started eating solid food at the exact same time as other babies at around six month old. He lost his first tooth at aged 5 and he wears clothes for his chronological age, not his developmental age. His body continues to grow and develop even if his mind and skills are years younger. He will still go through puberty as he grows and he eats just as much as any other child his age.

4. Developmental delay is often unseen and therefore can often be classed as an invisible disability.

This does not make it any less difficult for the child or adult or the carers. If you see a much older child still being supervised in a toilet or not talking when you speak to them please think about the fact they may look ok but they could be struggling to understand or communicate.

5. Milestones are worth celebrating whatever age they happen.

Child development has stages that almost every child goes through regardless of when it happens. A child with developmental delay will go through the same stages just at a different time. For example they learn to sit, then crawl, then stand, then walk. Or they learn to make noise, then babble then the first word. If your five year old is babbling for the first time this is wonderful because at some point they may change that babble to a word. If your four year old can stand unaided then one day soon they may learn to walk.

6. Developmental delay does not define anyone.

Society may put pressure on people to succeed and compete but that does not mean that we have to. Life is not about the destination but about the journey. For some they are just enjoying the journey at a slower pace and that is every bit as wonderful as those who choose to run.

As Martin Luther King Jr says: "If you can't fly, then run. If you can't run, then walk. If you can't walk, then crawl, but whatever you do you have to keep moving forward."

That, I can assure you, is what my son is doing. If he can move forward then I can too. However long this journey takes we are enjoying it together.

Special needs parent, carer, blogger and believer of the impossible