It was blocked four times, going from dot.com, to dot.org, to dot.net, to dot.me, but 7iber (Hiber, or ink in Arabic, with an emphasis on the guttural "H") plans to continue fighting for the right to publish content it deems important in Jordan. 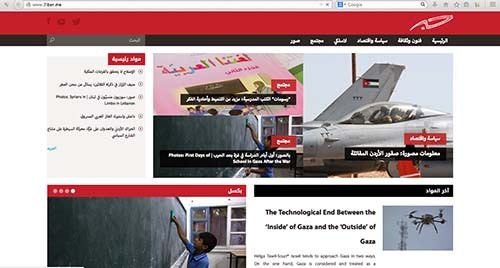 The hitch is that the avant-garde citizen media platform launched seven years ago by a group of eager young Jordanian activists and journalists is, technically, breaking the law.

"Moving from one domain to the other hurts the website," admitted 7iber's co-founder and editor-in-chief Lina Ejeilat. "When we went and spoke to the director of the (government) media commission, he threatened they would sue us for switching domains."

While she doesn't believe the government authority regulating websites as if they were print publications has legal grounds, she feels it sends a message the regulator is after this website. 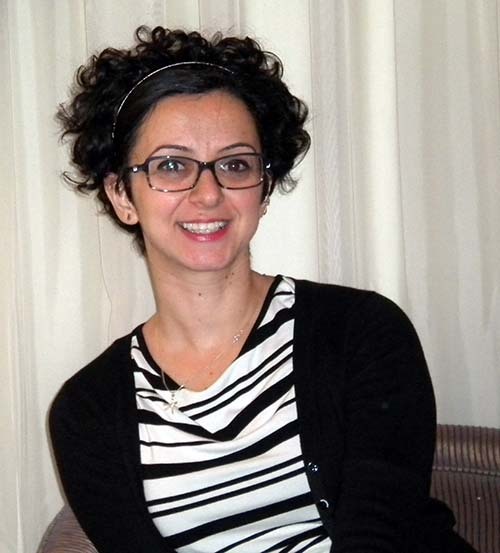 According to Jordan's Press and Publications law, news websites have to be licensed.

However, a license means having an editor-in-chief who is a member of the Jordan Press Association (JPA), and who's been a member for at least four years.

To many Jordanians' despair, the JPA has traditionally excluded a large number of professional working journalists.

To become members, candidates have to undergo training, depending on their university degrees, preferably in an official media outlet.

"I know journalists who've worked with Reuters for 20 years who didn't qualify because it was foreign," said Ejeilat.

She noted that regulations covering accreditation of Jordanian journalists in foreign print media and news agencies, not radio and television that fall under different rules, stipulate correspondents must be members of the JPA.

But those same correspondents can't become members of the JPA if employed by foreign media outlets.

"It's a catch-22, and it's like they tell you 'you have to be baptized in the official state media apparatus'," she lamented.

Although an amendment to the law in 2012 deleted the need to train at state-run media organizations, candidates for JPA membership must nonetheless undergo this "baptism" at a licensed media outlet, which new startups and others like 7iber find disheartening.

Critics, meanwhile, say Jordanian officials' attempts to tout the country as an attractive environment for ICT and tech startups to potential investors from Silicon Valley belies the existence of press freedom limitations and Internet restrictions.

7iber's founders, who launched it out of the blogging community, believe anybody can publish what he/she wants to provide an alternative narrative. 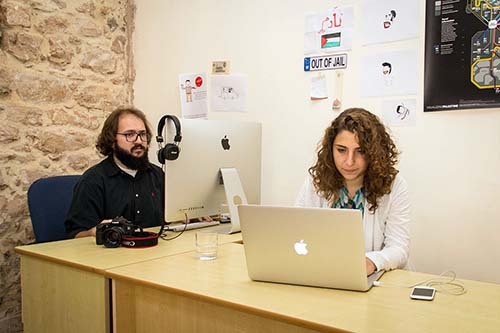 Ejeilat, who studied electrical engineering as an undergraduate in Jordan, before getting her MS from Columbia University's Graduate School of Journalism, leads a team of 14.

As 7iber evolved and grew, its editors eventually decided to produce professional content, not just rely on contributions, so they hired professional journalists.

"We approach stories in a different way, we have a great community of readers and contributors, supporters, and people who engage with our content, and engage with our activities," said Ejeilat.

That means pushing the envelope on taboo political, economic, social and religious topics that mainstream media may avoid.

This has led 7iber's readers to speculate that the four times it was blocked were an official reaction to thorny articles published just before the bans and a tactic to censor content.

"We're not going to let it restrict our work or create more boundaries," insisted Ejeilat. "A lot of censorship in Jordan is self-censorship created and nurtured by these vague laws and arbitrary government interventions."

She wants to fight and change the licensing law by campaigning for press freedom and raising awareness about constraints.

To highlight the Jordanian constitution's limitations and contradictions, 7iber published an infographic stating a clause guaranteeing freedom of thought and expression, albeit within legal boundaries, atop a list of activists charged with and/or jailed for violating various laws. 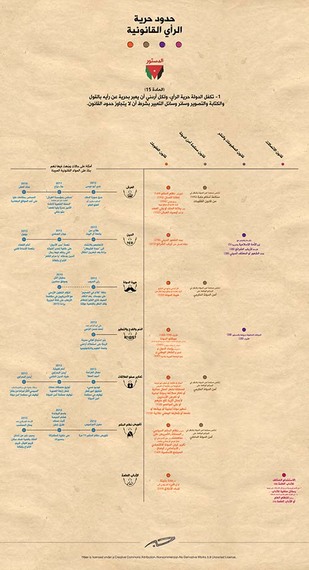 "You never know, they could extend this (licensing rule) to a blog, because the law is vague enough it could apply to anything," she said, adding it could also mean a person's public Facebook page full of news items.

7iber has always experimented and tested the boundaries as an online magazine focusing on features, analyses, videos and photo essays.

But Ejeilat admits she and her colleagues will eventually go the licensing route once the right formula is found to meet official requirements.

There are also financial considerations, with funding for projects having been secured from different international organizations.

To sustain 7iber, the overall operation has relied on training, workshops and on-site debates and talks. 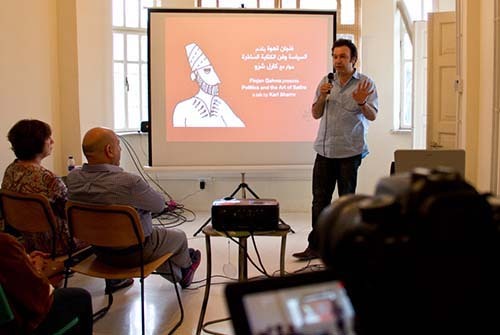 One guest speaker, among many, was outspoken architect, satirist and Middle East commentator Karl Sharro (a/k/a blogger Karl reMarks, or @karlremarks on Twitter).

But like countless traditional and strictly online media, securing a revenue stream and monetizing content also requires advertising and other innovative options, which 7iber is considering.