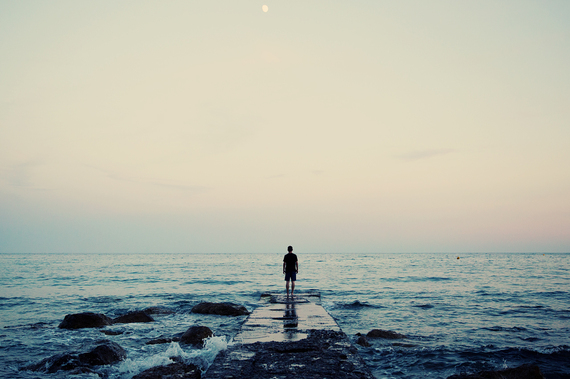 1. "Real Jobs" are the Secure Path

Conservative and secure are outdated ways of thinking. Although long-term jobs were good for our parents, or grandparents--who intended on working with a single company for 30-40 years, it's horrible advice for the rising generation.

Too many people believe security is dependent on external factors. Like a steady paycheck, job security, or many friends. But security and freedom are actually internal, not external. You can only be free by actually living the life you know you should be living.

Life will always be hell if you're in-authentically trying to please or prove yourself to others. What other people think about you is none of your business. Also, your relationships will be much healthier and more real when you are secure in yourself.

2. Living Your Dream is Harder than having a "Real Job."

2) We show up no matter what

4) We are committed over the long haul

5) The stakes for us are high and real

6) We accept remuneration for our labor

7) We do not overidentify with our jobs

8 ) We master the technique of our jobs

9) We have a sense of humor about our jobs

10) We receive praise or blame in the real world"

If you get paid to do something, even if that's flip burgers, you're a professional. Instead of being a "pro" at some job, what if you spent 40 hours a week working on your dream? You'd probably be a pro at that that much qicker than you think.

But in reality, how much time do you spend per week getting closer to your dream?

How much time do you spend every day?

Probably not much, right?

Living a lie is the hardest life you can live. Knowing that you are being in-authentic. Always wondering what might have been. Slaving away to promote other people's agenda's. Being a slave to time rather than the controller of it.

Working toward your dreams is grueling. A roller-coaster. But if the dream is real, the work involved is endurable because it leads to living as your truest self.

3. You Will Probably Fail

The odds of success seem bleak, right? Most people who attempt to do what you want to do fail, right?

But how long do those people really try? A few months? A few years?

The life and living you dream of will probably not appear in 2 weeks. It's not like a diet that you start and stop when you're done. It's a lifestyle. It's something you're extremely committed to living to the end. With this mentality, how can you fail?

The question is: Do you really believe you can do this?

If you look deep into your soul, you will know the answer.

If you don't really believe you can do it, you will fail. You will get a "secure" job, and you will always wonder what might have been.

But if you can convince yourself that this will work out, and if you're willing to put in the work every single day, you will succeed. Why would you not? You feel connected to this dream because you know you can do it brilliantly. So stop trying to convince yourself you're not worthy, or that you aren't good enough, or that nobody will like you.

"And above all, watch with glittering eyes the whole world around you because the greatest secrets are always hidden in the most unlikely places. Those who don't believe in magic will never find it."―Roald Dahl

This is why security is internal. You have to trust yourself and give yourself enough respect to be yourself. Everyone else is already taken. The real failure is in not being you.

"You pile up enough tomorrows, and you'll find you are left with nothing but a lot of empty yesterdays"--Harold Hill

Tomorrow is never. It doesn't actually exist. If you don't start today, you will probably never start. If you are lucky, you'll wake up like Mr. Fredricksen in the Disney film, "Up," a grumpy old man who finally runs out of reasons not to live his dreams. The unlucky ones check themselves into the nursing home leaving their dreams with the estate.

If you don't start today, what makes you think tomorrow will be any different? Chances are, tomorrow, you'll have more commitments, more responsibilities, and more reasons to postpone. Life tends to get busier, not simpler, as we get older.

I had a friend who wanted to be a professional film-maker. But he was getting his college degree in business. I asked him why and he responded, "I want to make a lot of money while I'm young, and then I'll have lots of time and money to make brilliant films."

On the other hand, Gary Vaynerchuck (best-selling author and creator of multiple million-dollar companies), argues that people should take huge risks while they're young. Don't be conservative in your career until you're 40. The younger you are, the less you have the loose and the greater the possibilities if you succeed.

But if you're avoiding risks in your 20's and 30's, you're playing way too small. In fact, having stability and "security" may actually hinder you from accomplishing your dream. Psychologists have found that having constraints leads to innovative thinking. That's why Twitter only allows 140 character posts. Constraints are a good thing!

Your current situation may be super humble and challenging. You may be desperate for rent-money. Or for connections. This desperation to make something happen could be the very catalyst and constraint for success. The obstacle is the way.

Don't wish less constraints on yourself. You'll get too comfortable and won't need to think creatively.

6. The Corporate Ladder is the Way to My Dream

"People may spend their whole lives climbing the ladder of success only to find, once they reach the top, that the ladder is leaning against the wrong wall."--Thomas Merton

You may be able to get to your dream by "paying your dues." However, it's not likely. You will undoubtedly hit a ceiling where jobs are scarce and candidates many, where your progress will be stopped.

In his book, Smartcuts, Shane Snow explains that the most successful people in the world don't climb ladders. Rather, they switch ladders laterally. For example, many of our greatest American Presidents spent very little time in politics. They spent a lot of time on other ladders and then switched ladders. This allowed them to skip the rat race lower down where the competition is grueling.

Getting to your dream isn't a one-track path. It's more like hitch-hiking across the country. You will need multiple rides. Or, in this case, multiple ladders. Succeed quickly on your current ladder, but be ready to hop off and find a better one when your progress slows.

"Stay committed to your decisions, but stay flexible in your approach."--Tony Robbins

7. People Will Think You're Dumb

A buddy of mine spent a long time pursuing a career. He even got his Ph.D. After a few years in that field, he felt completely incongruent. His heart wanted something else. But he wondered what other people would think of him. "Wow! What a total flip-flopper. He can't commit to anything."

He finally mustered the courage to leave his vocation and pursue his dream in Athletic Apparel Design. After about six months, he was starting to get momentum. But he still wasn't making near as much as he did in his previous job.

A cool job in his previous field opened up and he decided to take it. Now, it's been a few months and his heart longs to get back to design. But what will people think of him? This time is really being a flip-flopper, right?

He's trying to live his dreams. And no one is going to fault him for that. In fact, what he's doing takes courage. He hasn't consigned himself to what society has told him he should do. He's struggling through this because he needs to be authentic. It's like air to his lungs after being held under water too long.

Honestly, people are far less judgmental about us than we think they are. Most people's insecurity is about themselves. In truth, others want to see you succeed. They admire people who are willing to live their dreams. It inspires them. It gives them hope that one day, maybe, they'll do the same.

8. You Can't Start Until You're a Professional

"Perfectionism is not excellence, it is procrastination based in fear."--Alli Worthington

This myth is very similar to the myth that you need stability and "security" before you can live your dreams.

And got super good at it.

And you will too if you live your dream every day.

But don't let being an amateur in the beginning hold you back from one day being a Rock-Star. Be humble enough to have your humble beginning. Start in your garage like every band does. Then start playing shows for your friends and family. Then play free shows around your community. Get better and better as an amateur and one day you'll be a pro.

But you'll never be a pro if you don't start now.

You'll never be a pro if you don't do it every day.

You'll never be a pro by climbing to the top of the wrong ladder.