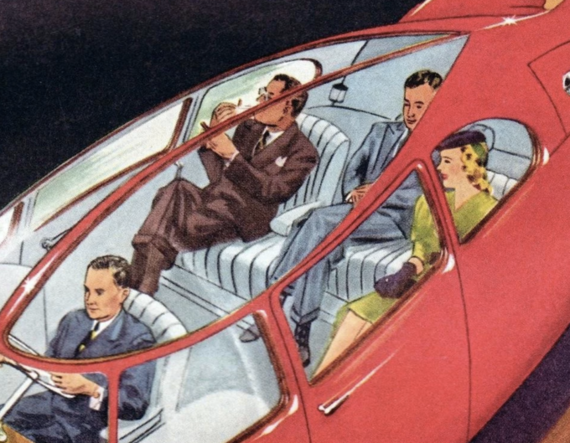 Looking back at vintage conceptions of the future can be interesting. Most depictions of the 2000s that were rendered in the 1800s or early 1900s come off as whimsical, because they're so off-target. Illustrators in the past were often focused on transportation, military tactics, and domestic life, and they predicted everything from whale buses to Fallout-esque fashion. Some illustrated predictions, however, are eerily accurate. 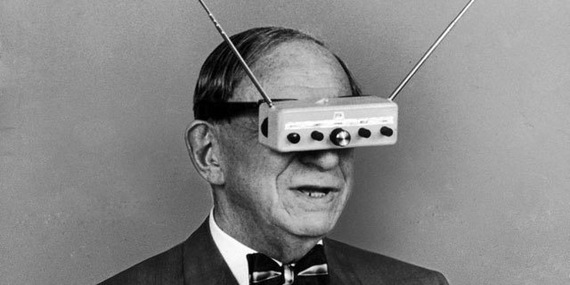 In 1963, science fiction author Hugo Gernsback posed for Life Magazine wearing a fake mock-up of a tool featured in one of his stories. He called the contraption "TV glasses". Considering them now, they look a lot like an oculus rift. Hugo told Life that users would one day watch television on screens so close to their eyes that they felt immersed in the action, effectively predicting the media's recent preoccupation with virtual reality.

No one's sure if Hugo also predicted immersive "action" of the pornographic kind, but that's what technology's up to now.

In 1969, the Japanese magazine Computopia published an illustration featuring classroom robots that hit students on the head if they stopped paying attention. Though these robots don't actually exist (they sound like a nightmare for the school system), education has become increasingly tech-savvy in the 1960s. Many classrooms in America, for instance, provide access to iPads, audio and digital textbooks, and remote access to education has seen a boom in popularity.

Although this Japanese illustrator imagined technology would be used for discipline, he also predicted (via that little graphic in the bottom right corner of his art) that students would use computers to solve problems, which is accurate today.

In 1965, illustrator Athelstan Spilhaus drew a serious-looking man hooked up to to a "computer" as part of his weekly comic strip, Our New Age. He asserted that 2016 would see men's brains enhanced with drugs and hooked up directly to computers. 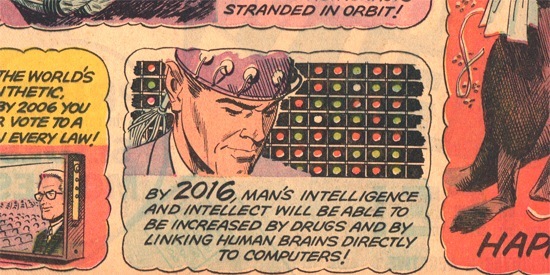 Spilhaus wasn't that far off -- recall how many students you knew in college who habitually used Adderall or Ritalin to increase academic performance -- but his cultural influence at the time is the most surprising thing about him. When Spilhaus met President Kennedy, JFK reportedly told the sci-fi comic illustrator that the only science he had ever ingested as a kid came straight from Spilhaus's strip in The Boston Globe.

The movement for cognitive enhancement has been in the works for years, as Spilhaus predicted. In 2012, Oxford released a paper on Transcranial Direct Current Stimulation, arguing that placing sensors on the skull to send and receive digital brain-waves might enhance the active synapses in a user's brain. Similarly, Silicon Valley tech geeks have famously been using Nootropics, a drug meant to enhance brain function. It seems Spilhaus was right on the money predicting both chemical and digital enhancements to the human intellect. 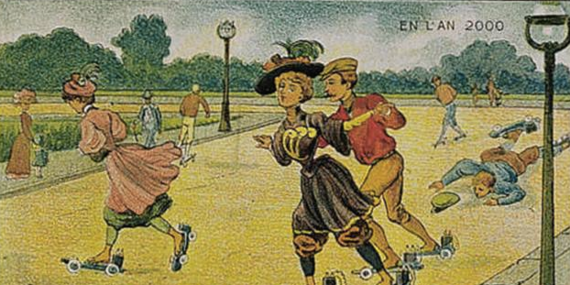 In 1910, French illustrator Jean-Marc Côté assembled a team of similarly-minded folks to release a series of postcards featuring images "set" in the year 2000. All of the illustrations are worth checking out, but some are more accurate than others. Although the gas-powered roller skates featured in the illustration above never really took off, Côté's quaint drawing recalls one of 2015's top holiday gifts: the incorrectly-named and extremely flammable "hoverboard". He even predicted how often people would fall off their toys! 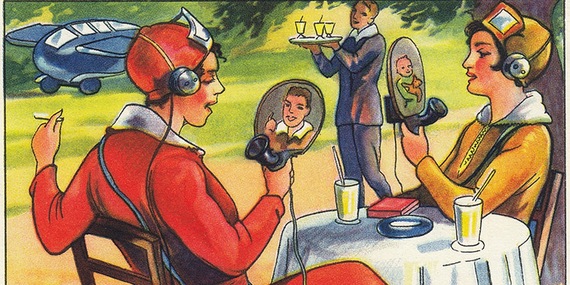 Many, many illustrators predicted the rise in video calls, although one of the earliest drawings of this type was rendered in 1930.

The above illustration, available in full here was featured on the cover of Philip Jose Farmer's Strange Compulsion, a science fiction novel published in 1953. Although the plot of Strange Compulsion actually involved a parasite which caused the host to feel attracted to close relatives, the novel dealt with the uneasiness surrounding sex and monogamy that has only increased alongside the development of sex-enhancing technology.

The push for women in STEM fields

The above illustration was published on a Chinese propaganda posted in the early 1980s. The message at the bottom of the poster read, "Love science, study science, use science!", arguing decades before the Western push for young girls in STEM fields that introducing women to science in their earliest years would improve the overall culture. The illustration shows tiny girls operating large machinery, studying astronomy, and piloting high speed trains, predicting the role women would take in scientific fields. 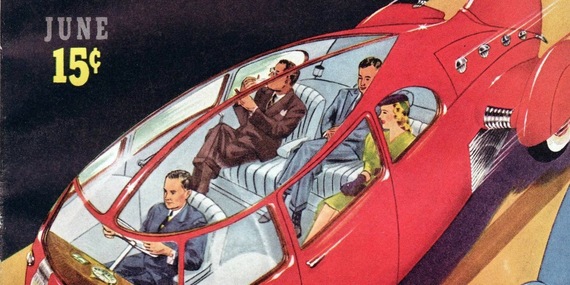 In 1940, Popular Science magazine published the above illustration on its cover. The magazine predicted that cars would function as comfortable, portable lounges by 1942. Though technology didn't actually work out this quickly, Popular Science effectively predicted the push for luxurious vehicles that is now culminating in self-driving cars.

MORE FROM INVERSE:
Download
Calling all HuffPost superfans!
Sign up for membership to become a founding member and help shape HuffPost's next chapter
Join HuffPost
Voting Made Easy
Register to vote and apply for an absentee ballot today
Register now