Chrissy Teigen may be the epitome of #hairgoals but most of it is fake, you guys.

The outspoken supermodel posted a collage of her long gorgeous locks on instagram the other day with the caption "All this hair!? Notttttt all mine!" in an effort to shut down hair extension shamers. 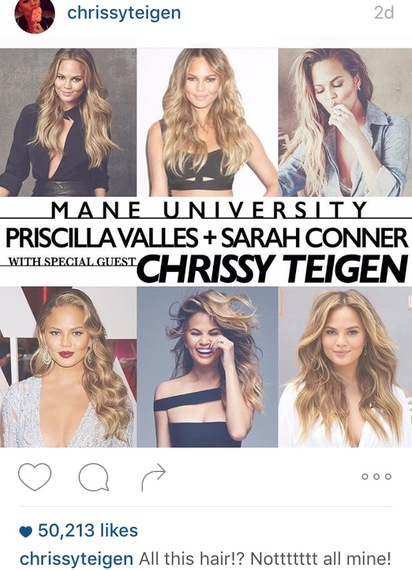 Because apparently hair extension shaming is now a thing. So celebs like Teigan, Selena Gomez and Mindy Kaling are using various social platforms to reveal that their hair is fake and it's spectacular. "Hair Extensions ARE NOT bad or something to be embarrassed by," said celeb stylist Jen Atkin on instagram. "We have lash extensions, hair bleach, hair dye... Do whatever makes YOU happy and let's all just be grateful we have the option."

In case you're wondering, my hair is not all mine either. But I'm all about full disclosure and will happily toss off a quick "you can buy it in the store!" response to anyone who happens to throw a compliment my way, be it the chick behind me in line for the bathroom or the girl ringing me up at the wine store.

I started wearing extensions around 10 years ago when I had first had kids. Because one of the things no one tells you when you decide to pull the goalie is that your hair's gonna fall out after you start popping out the babes. And not just a strand or two here and there. But clumps. Big, fat, scary clumps. You know what's even worse? The eventual re-growth. Which sounds like a good thing but actually isn't. Because it leaves you with random little short pieces sticking out all over the place that's why.

The fact that I have super curly hair only makes things worse. And before you start with the whole "Aww but I actually LOVE curly hair" thing, let me set the record straight. Do I have ringlets? Yes. Are they the awesome kind of perfect Keri Russell-in-Felicity twirls you can stick a pencil through? No. They are the tight, frizzy kind Nicole Kidman rocked in Dead Calm. I'll wait while you go search that on youtube.

And not only is my hair curly, but it's super-fine too. Which is not to say that it's supa-fine and freaking awesome, but that its super fine in texture and it freaking sucks. Throw in a relative humidity above 60 percent and you've got a full-on Monica Geller in Barbados situation. 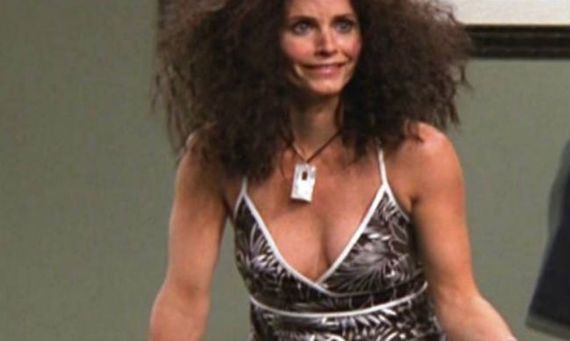 And by you I mean me.

THIS was my hair when I woke up this morning: 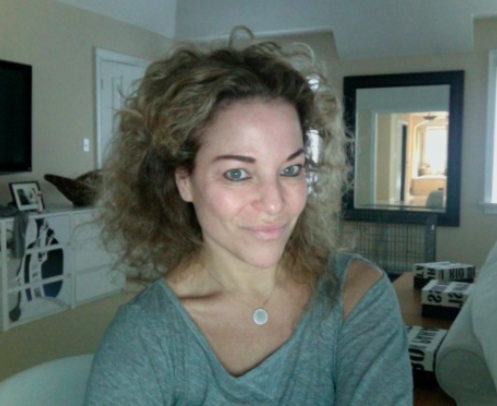 I didn't mean to scare you. 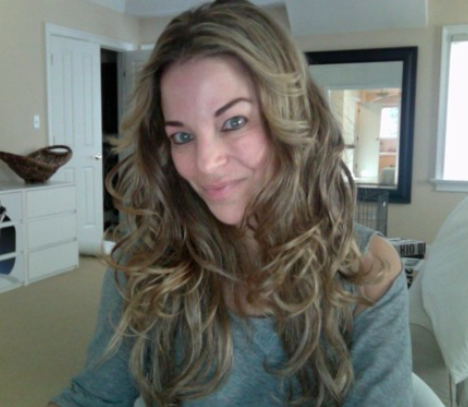 From Glenn Close in Fatal Attraction to J.Lo at the Grammys in Seven. Freaking. Minutes.

Call me shallow, but when I tell you this discovery changed my life it is an insane understatement. Because if I had to walk around every day looking like my before pic, I would probably be pissed off enough to boil some poor kid's pet rabbit in a pot on the stove, too.

Here's the play by play:

For starters, I wash my hair at night, once or twice a week at the most. Because in addition to being super curly and super fine, it's also super dry. I know what you're thinking. I SO won the hair lottery.

I shampoo and condition with Herbal Essences Naked Volume. Because fine hair needs volume so I'll take it where I can get it. Bonus points for use of the word naked. Seriously though, for some reason this stuff just works for me better than Bumble & Bumble or John Frieda or Deva Curl or any of the other fifty billion hair products I've tried over the years.

And you know I've tried them all.

When I get out of the shower, I whip my hair back and forth to get rid of excess moisture, untangle with a wide-tooth comb, and then coat my strands with Phyto Pro Gel #8. Which, because nothing is ever easy when it comes to my hair, I have to hunt down on eBay because it was recently discontinued.

Then I let everything air dry overnight. Which is perhaps the only perk us spiral-headed chicks get. In the morning, I use a flat iron to loosen the curl, a process which involves running the iron quickly down each individual curl, twisting it clockwise as I go. If I'm in the mood for a little more curl, I'll switch to a curling iron instead. And then I add the piece de resistance - my HairDo 23-inch wavy extension in either Buttered Toast or Honey Ginger, depending on the season. If I'm feeling extra saucy, I'll clip-in a few extra Autumn Ombre pieces from Laced Hair.

It occurs to me as I'm typing this that this all sounds like a lot of work. But it's actually not when you consider that the actual shampoo-ing part only happens twice a week. During the rest of the week I sleep with my hair pulled up into a pineapple-style bun on the top of my head, then maybe touch up a few pieces in front in the morning, clip in my extensions and head out the door.

And all this effort is a small price to pay to have both Kelly Cutrone and Ken Paves tell you via twitter that they love your hair.

Hells yeah you do!

Kelly Cutrone and Ken Paves both said they love my hair.

Including the ones that involve carrying my hair home from the local beauty supply shop in a plastic bag.