In Beth Vrabel's funny, touching middle grade novel "A Blind Guide to Stinkville," a spunky 12- year old named Alice moves with her family from Seattle to a small paper mill town in South Carolina. In Seattle, Alice's blindness and albinism were almost a non-issue. Alice attended a regular school and all her friends and community members understood and accepted her diagnosis. But in Stinkville, for the first time she has to not only find her way in a new town, but also continually explain her visual impairment and albinism to new people who don't understand her diagnosis.

Kirkus Review writes that Alice's journey encompasses "the rarely explored ambivalence of being disabled on a spectrum. Alice's insistence that she's 'not that blind' rings true with both stubbornness and confusion as she avails herself of some tools while not needing others, in contrast to typically unambiguous portrayals."

I spoke to Beth Vrabel about the novel.

How and why were you drawn to write a novel with a narrator who has albinism and is blind?

My tween daughter has a form of albinism and, like all people with the genetic condition, is visually impaired. I didn't realize that albinism runs on a spectrum. While she has a mild form of it, many children with albinism are legally blind, like Alice in "A Blind Guide to Stinkville." It takes a long time to figure out the extent of a baby's visual acuity. For months, we didn't know where our baby fell in that spectrum. Was she blind? If so, what would that mean for her future? For our family? A lot of that projection inspired Alice and her family.

Hand-in-hand with that, I very quickly realized that while my daughter was born with a challenge, she is so much more than her diagnosis. Truthfully, most of the time her visual impairment just is something to accommodate, not a big deal. So it's always a bit of a culture shock when we come across characters with albinism in print or on screen and they're mystical, devious or sickly. That's so not true. So I guess I also wanted to tell the story of a girl who discovers she is strong, capable and smart, and just happens to have albinism. 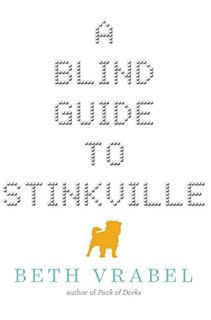 Yes! Alice was all of those things--strong, capable, smart--but also very charming and good with people. In the novel she and her family are dealing with their recent move from Seattle, Washington to Sinkville, South Carolina. Everyone calls the town Stinkville because of the smell coming from the town paper mill. And everything in the town is centered on the paper mill itself, so the odor is unavoidable. We know Alice is at home in Stinkville when she no longer notices the odor. What made you choose a paper mill town as the setting?

Oh, that's easy! I grew up in a paper mill town. In fact, most of my family still lives in or around that same town, where everyone knows someone who works at the mill and just about everything is named after it, including the library and local diner. Further out of town, there is a huge man-made lake, built to give the mill an emergency water source. My dad would take me fishing there when I was a kid. I was fascinated by the roads and driveways that led right into the water and the stories my grandpa would tell me about the whole farms that had been submerged under the water. I loved the little town, and couldn't understand the groaning out-of-towners would make when they visited. The smell wasn't that bad! And then I moved away.

Now when I come home, the smell smacks me in the face! I knew I wanted Alice to have a constant reminder of her move and it couldn't be anything too visual, given her blindness. Enter the paper mill!

It's funny what crops up in my writing. Things I haven't thought about for years--like the homes I had imagined under the lake--suddenly pop up. It happened in my first novel "Pack of Dorks," too, when my long-gone grandma showed up again and again.

The move from Seattle to Stinkville triggers a severe episode of depression for Alice's mother, who struggles with moving from a hip city in the Northwest to a stinky little paper mill town. Could you talk about writing for middle grade readers about adult depression?

I'll admit, it was painful to write. Alice would see glimmers of her healthy "Seattle mom" and the next day, or even a moment later, she's gone. While Alice's mom is the one depressed, the disease tangles each family member. Her father throws himself into work, telling them all that Mom needs space and time to adjust. Alice's brother James shutters himself in, refusing to let anyone see his pain. Alice is left floundering, studying her mom for hope and grappling with resentment at the same time. It's impossible for adults to understand, let alone a child, how someone can be so loved, so needed and still so sad. Like any kid, Alice can't help but wonder if she's responsible for the depression and what she can do to make it stop. And, yes, part of me wanted Alice to be able to do something to snap her mother out of it; Alice certainly tries. But that's just not how it works. Her mom needs time, medical care and love to become healthy again.

As Alice explores Stinkville she learns about the civil rights struggle that took place in the town decades earlier and how the then-owner of the Williams Café helped the restaurant to become both a symbol of integration and a "hotspot for promoting the [civil rights] movement." Can you talk a bit about this dovetailing of the issues of race and disability or "otherness"?

Everyone faces challenges. Some people are even born with them. This is an expression we use a lot in my family, and I think it often applies to both issues. A person living with a disability often faces exclusion in a thousand subtle ways. Similarly, minority children must jump hurdle and hurdle just to reach equal ground.

This is why I absolutely love the We Need Diverse Books movement. Having characters like Alice and Kerica share their stories and make big differences in their community because of--not despite of--their challenges gives power to all children. Because we're all going to face challenges. 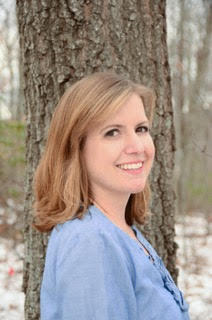 Beth Vrabel, author of "A Blind Guide to Stinkville"

So for readers who aren't familiar, "Pack of Dorks" was your debut novel and is part of a series. I've read that "Camp Dork," the second novel in the series, will be published in May 2016. I'm really looking forward to it! Is "A Blind Guide to Stinkville" a stand alone novel, or will it be part of a series as well?

Oh, I'm so glad you asked this. I'm super excited to share that "A Blind Guide to Normal" will release October 2016! Toward the end of "Stinkville," we meet Ryder, who lost an eye when he was younger due to retinoblastoma. Ryder's only in one chapter, but, man! He steals the show. In the follow-up book, Ryder leaves a school for the blind to enter "normal" school for eighth grade. But when he manages to humiliate the school hero, fall for the fierce girl next door, accidentally join the school quilting club and knock out his science teacher all on day one, Ryder quickly realizes that there's no such thing as normal. I love this kid.