I love beer. If it's a Corona poured over ice with a squeeze of lime juice.

So it was with some trepidation that I agreed to a craft brewery tour of Denver, where I was visiting Laura, one of my very best friends, for the weekend. She decided I'd been to the city one too many times without doing so.

Colorado has no shortage of craft breweries. According to the Brewers Association, the state is ranked third in the nation, with its 235-plus craft breweries producing more than 1,673,686 barrels of beer annually. That's 13.6 gallons for every adult resident age 21 and older. It's impossible to find an accurate count of craft breweries in the city of Denver, our intended target, since it sees a new one open every day. But clearly, I had some catching up to do.

Beer has evolved to a connoisseur-level pursuit in the Mile High City. The jargon employed by craft brewery purveyors and those who consume it is every syllable as grandiloquent and esoteric as their wine industry brethren's. (Read: I don't understand a word of it.) In earnest, and exceptionally passionate fashions, kind beer masters/beer enthusiasts/people who really like beer (?) proffered shot glass after shot glass of yellow, red, tan, brown, or near black-colored liquid while saying things like, "This is a complex and full-bodied, yet approachable, saison, with noble hops and a strong influence of fermentation from aged Belgian yeast that exhibits notes of cocoa bean and esters of raisins that produce a spicy, satisfying finish." (Me: does it come with a lime?)

Denver's brewpubs are as varied and creative as the beers they produce. Each one is different in terms of vibe, decor, and food served--or in lieu of a kitchen which food truck parks on premises. Whether you want an Imperial Red Rye Stout at a heavy metal-themed brewery, or a Smoked and Oaked Belgian-Style Ale at one that transports you back to your grandma's house, Denver has it.

Having both worked in marketing for over 20 years Laura and I quickly anointed the day's outing "The Over-47-Year-Old Girl's Guide to Denver's Craft Beer Bars." After enlisting her very nice and patient husband to be our designated driver, we were on our way.

We made it to four breweries before deciding it was time for a cocktail. You can take the girl out of the martini, but you can't a martini out of the girl... or something like that.

Here are my findings:

Beertenders (?) Sarah and Laurel are quite possibly the best employees on the planet, and the space is really cool. The decor is a mix of Meatpacking District-style "industrial sparse" circa the early aughts, with the spirit of a 1960s diner, only cleaner with less fuss and kitsch. And it works.

Drenched in sunlight with high ceilings, it's open and airy, with a super causal vibe and great music. (Ratio is closely aligned with the neighborhood's music scene and its owners are former musicians.) I could have sat outside on its porch all day. That it also offers a wide variety of beers that all tasted good was a bonus. 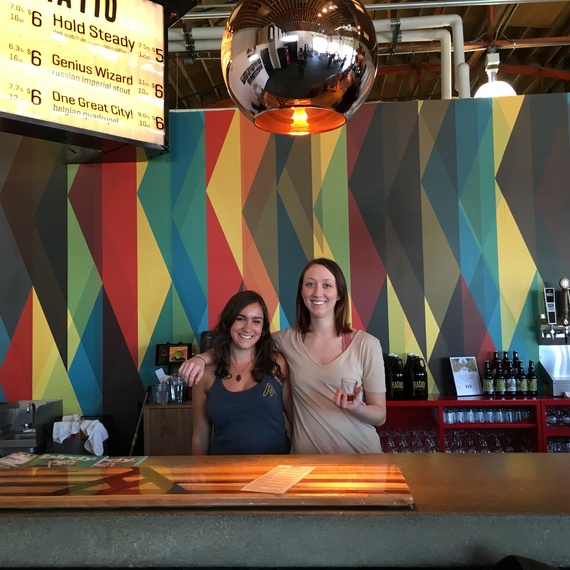 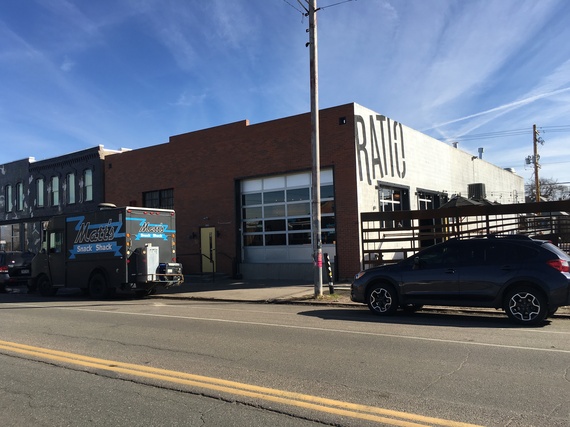 According to co-owner Chad Miller (who was very nice), it took 14 years for his brothers and him to build their "eponymously" named brewery (the brothers and their father earned the nickname "The Blackshirt Boys" early in life for wearing black t-shirts only. Like Ratio, Black Shirt is an artisanal, music-driven brewery located in Denver's RiNo Art District, but the similarities stop there.

Black Shirt Brewing is smaller and a bit darker, and serves only Red Ales. Called "The Red Ale Project," their approach to brewing is predicated on their father's advice "to do one thing and do it better than anyone else." We tried five beers and while not all were my taste, the range of flavors was impressive. I guess in their case, father knows best.

Here I learned about the existence of Red Ale, and that unlimited flavors can be derived from brewing it in different ways. Favorite beer tasted: Altbier. 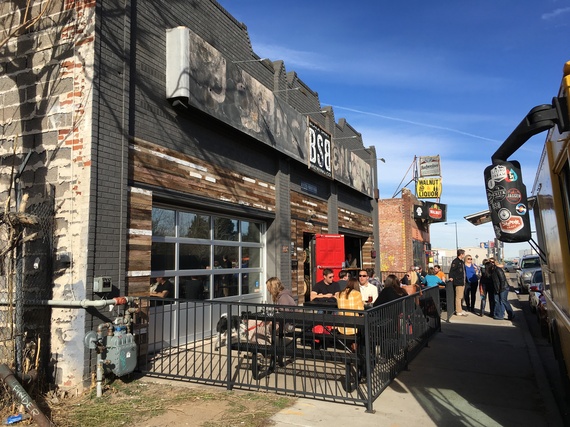 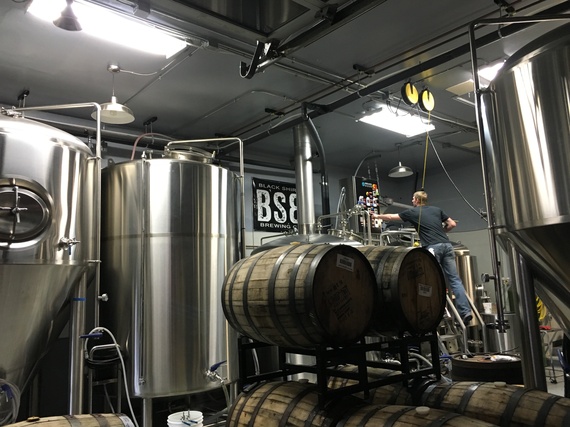 As its name suggests, Epic is large. Not necessarily in physical space, but in feel. It's like the ego to Denver's independent breweries' ids. Headquartered in Salt Lake City, Epic opened in Denver in 2013, bringing with it 25 taps of artisanal beer. The vibe is decidedly irony-free: not a man bun or hipster beard in sight (at least while I was there). Friends and families listen to the greatest hits of the '80s and '90s, while drinking beers with names like "Senior Brainless" and "Escape to Colorado." The space is bright and comfortable with sports playing on large TVs.

Here I learned it's possible to brew a beer that tastes like a mix of cough syrup and smoke (not that there's anything wrong with that). Favorite beer tasted: Blue Ski Lager. 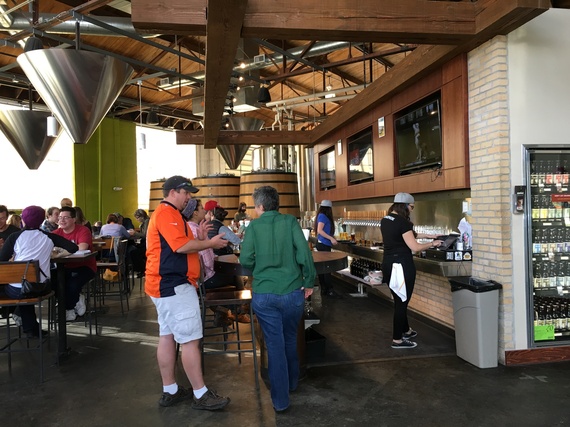 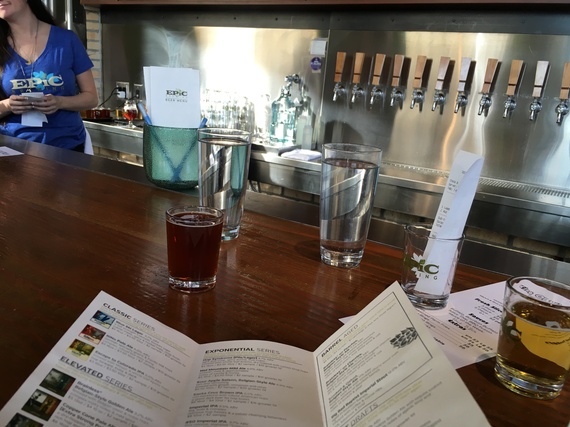 Casual and super laid back, the quasi dive bar De Steeg (Dutch for "the alley") is located in an alleyway in Denver's Tennyson district, which probably sounds worse than intended. The place is great. The small, largely unadorned space holds a half-dozen or so tables packed closely together, and a plain bar. There's an old-timey popcorn machine with all-you-can-eat free popcorn, and a wall-sized garage door that opens to a "patio" area in the alley.

Owner Craig Rothgery was there when we stopped in and he couldn't be nicer (the other men working with him were great too) or more skilled at brewing beer. His passion for brewing was evident: every beer we tasted was excellent.

Here I learned I had absolutely no idea what beer could taste like. I also learned a lot about how beer is made and its different types, but forgot it all immediately. Favorite beer tasted: Red Kolsch. 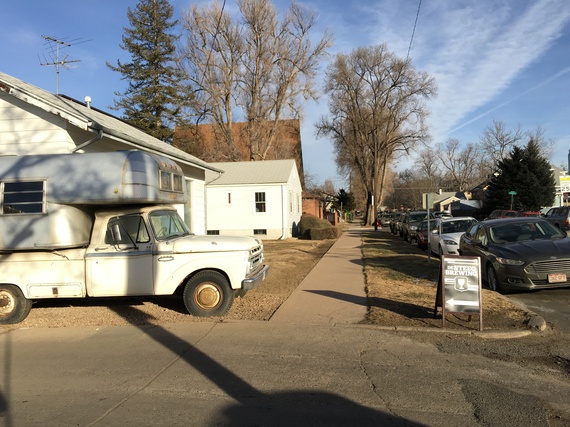 The alley leading to DeSteeg Brewing 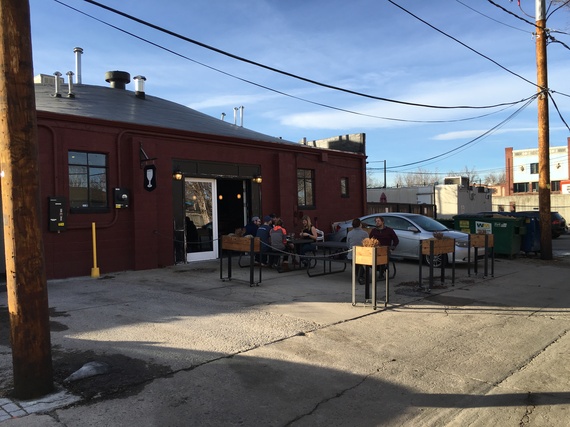 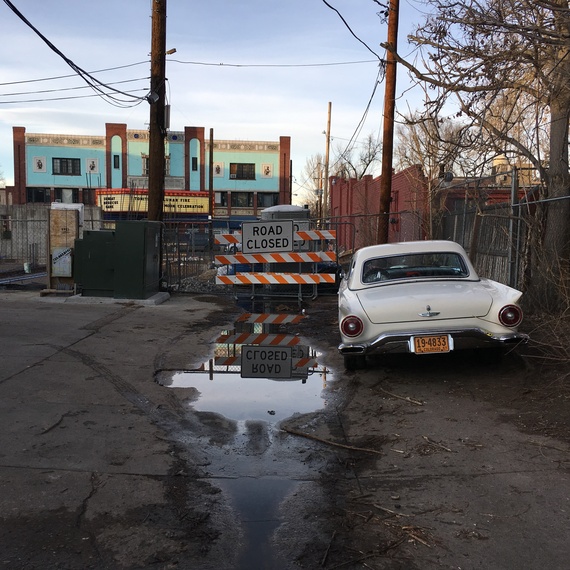 The view from DeSteeg Brewing's patio

Twenty shots of beer later, Laura and I had barely scratched the surface of Denver's craft beer scene, but I'd gained a far greater appreciation for beer and the people who brew it. That said, I'm sticking with Corona.

Thank you so much for reading. To find out more about my work and me and sign up for my newsletter, please visit wendysimmons.com.