It began as a question over beer.

"We thought, 'What if there was a musical conversation that could arm nations engaged in conflict over a vital resource, with some empathy and goodwill towards each other?'" says Ethiopian-American singer Meklit Hadero.

She and her friend, Egyptian-American ethnomusicologist Mina Girgis, were in a San Francisco bar three years ago, discussing musical links between their cultures and issues, like water rights and agricultural sustainability, their two countries share. Inspired by Yo-Yo Ma's Silk Road Ensemble, the Nile Project was born. 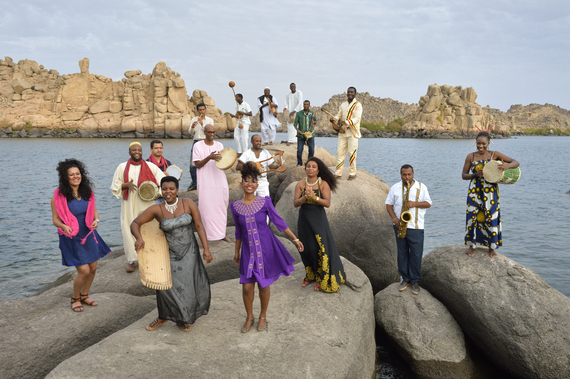 Currently on a U.S. university tour, the collective is part of a larger platform for raising awareness of the Nile as a "region as opposed to a river that runs in front of your house," says Girgis. Egypt almost initiated war over Ethiopia's plans to build a dam, threatening its farmers' existences with drought. Last week, a negotiated agreement eased the threat.

Bridging borders and influences, The Nile Project brings together musicians from 11 Nile Basin countries that depend on the Nile for everything from drinking water to jobs and electricity. They collaborate to create vibrant, happy music with a purpose: to drive civil discussion and tangible cooperation.

Hadero adds, "When we started the Nile Project, we were really coming from a place of musical curiosity. We had access to each other's cultures and diaspora. But at the same time we realized we were in a moment of tension around how to share water, and that connecting people-to-people across the Nile countries could have real and positive impact."

Every Nile Project performance is a euphoric fusion of musical ideas. But in order for the artists to play together, they first had to learn how to navigate disparate national identities and unfamiliar systems of scales. "For example," says Dawit Seyoum, who plays the Krar and a flute called the Washint, "I'm used to playing my instrument in my own way, but for some songs I had to adapt and tune it differently, so I can join in."

Compositions always begin small, with two or three initial collaborators, before gradually growing and transforming into an arrangement everyone eventually touches. "In our residencies," adds Seyoum, "everyone's teaching a lot of music, so we're learning different cultures, different music and stories behind all of it."

Deep grooves, amazing rhythms and catchy melodies come from all sides of the tradition spectrum. "Outside of the stage, people might not think they belong together, but onstage everything compliments one another just perfect," says Girgis.

The sense of the music belonging to everybody also applies to the audience. Offers Hadero, "We're trying to model the types of connections we'd like to see happening in East Africa, not just around how we share water... but imagine if those types of relationships were happening on multiple levels? It's a very exciting thought."