Charles Robbins is the executive director and CEO of the Trevor Project, the leading national organization focused on crisis- and suicide-prevention efforts among lesbian, gay, bisexual, transgender and questioning (LGBTQ) youth.

After publishing my recent post "The Gay Teen Suicide Rate and the Christian Condemnation of Gays," I contacted Mr. Robbins, figuring if anyone would know about gay teen suicide, it would be he. My interview with him follows.

First, though, by way of contextualizing our conversation, here are some fairly astounding facts I gleaned from the Trevor Project's website and a recent TIME.com article:

And now here's my talk with Mr. Robbins:

Me: How long have you been with the Trevor Project?

Charles: This is my fourth year.

Me: It must be such emotionally grueling work.

Charles: You know, it's both heartbreaking and heartwarming. It's heartbreaking that the need for Trevor Project's services is so apparent. The volume of calls we get, the number of letters and emails we get every day from young people desperately reaching out for help, the number of completed suicides we hear about ... all of that is terribly heartbreaking. But what's heartwarming about what we do here is how much support there is out there from people who want to help these kids. So many people really do care, really do want to reach out to these deeply disenfranchised young people. So many people are coming to understand that the fact that LGBTQ are four times as likely as their heterosexual peers to complete suicide isn't just a problem. It's an epidemic.

Me: Four times. That's so awful.

Charles: It is. And it's not just because being gay means you have, organic to your nature, an increased desire to self-destruct. Being gay doesn't mean you just show up with an inherent tendency to complete suicide.

Me: Wait, explain why you say "complete suicide" rather than the more common "commit suicide."

Charles: Yes, thank you. We encourage people to say that someone completed suicide, because in this context the word "commit" sounds too much like crime-talk: it encourages us to think of the person who takes his or her own life as a perpetrator of a crime, rather than what they are, which is a victim. It's just an outdated use of language that we're trying to help change.

Me: Beautiful. Thanks for the explanation. You were saying that being gay doesn't equal being suicidal.

Charles: Exactly. It doesn't. And yet that's what so many people imply. They take data that conclusively shows the much higher prevalence of completed suicides amongst LBGTQ kids compared to heterosexual kids, and try to use it to "prove" that a predilection toward suicide is a quality of being gay. And that's just absurd.

Me: Why do so many teenagers who self-identify as gay attempt or complete suicide?

Charles: Because the protective factors in their life just aren't there. They don't have in their lives so much of what keeps young people, any person, feeling affirmed and worthwhile. A loving family. Supportive friends. A school environment where bullying isn't tolerated. A network of supportive, caring adults. These are the sort of vital protective factors that have been removed from the lives of so many LGBTQ teens. They're alone; they're ostracized; they're maligned; their very being is constantly getting negated. Of course they're susceptible to taking the terrible, final step. Being gay doesn't make you suicidal. Being picked on, victimized, and constantly devalued makes you suicidal.

Me: The teen years are difficult enough without the extra burden of being different from everyone else.

Charles: Exactly. For so many LGBTQ kids, high school is just an unendurable hell.

Me: What's the one thing you'd most like people to know about LGBTQ teens?

Charles: That words and behaviors matter, that they have real consequences that affect real people. "Sticks and stones will break my bones, but words will never hurt me" is the worst adage ever. It's completely wrong. Words do matter. Bullying does matter. Maybe not once or twice -- everybody gets bullied sometimes. But LGBTQ kids get bullied all the time. It's a way of life for them. It makes their life unlivable. And so many decide, ultimately, that unlivable is exactly what their life is. So they see no choice but to end it. It's tragic. Trying to prevent them from feeling that way, from taking that irrevocable final step, is what we do here at the Trevor Project.

Me: Is there anything in particular that you'd like to say to my Christian readers? 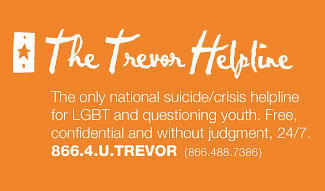 Charles: I think that the fact that so many young people are so tormented -- so ostracized by their family, peers, school, and society in general -- that rather than engage and participate in life, they choose to end their life, says a lot about the Christian values that everywhere inform our culture. I think each and every one of us needs to look inside of ourselves and examine those values for both the good and the harm they're doing. What I would also very much like Christians to know is that being gay isn't a choice that anyone makes. It's not a switch you can turn off and on. Gay people were born into creation just like anyone else, and to devalue who they are by insisting God didn't really make them as they are is to deny them the right to a rich and loving relationship with God, and that's a terrible, terrible thing to deny anybody. No one should ever use scripture to justify removing another person from the spiritual process. If you're a Christian, as I am, you should look to Christ for how to live and act toward others. And what does the Great Commandment of Jesus say but that we're all supposed to love our neighbors as we love ourselves? I wish more Christians would remember what Jesus himself told them to do.

John also blogs on JohnShore.com. You're invited to join his fan page on Facebook (where he's forever hanging out all day and goofing around with others who have).

Related post of John's: "My God Cares About Hearts, Not Crotches"