A while ago, I had the opportunity to sit down with a leader who had just finished a long, distinguished run as the CEO of a high-growth professional services firm.

She joined not long after the firm started. The early days were hairy. Several times, she and the other founding leaders wrote personal checks to the company to be sure they would make payroll. There's nothing like the threat of missing payroll to focus the mind. On a corporate level, it's a near-death experience. Who wouldn't love to have snazzy office space and a generous dental plan? But it all blows up if you can't make payroll.

Luckily, this leader is blessed with outrageous tenacity. She strapped on her sales belt and personally took on the task of winning and delighting customers. Her example inspired -- and in some cases spurred -- her colleagues to do the same. Through a lot of hard work, they came out of the woods. Within several years, they were not only solvent but growing in size, profitability, and reputation in their field.

But... in hindsight, this leader now realizes that she never quite came out of those woods in her own head. Despite the hard-won success, she led her firm like it was still in critical condition. Here's how she said it over a reflective lunch:

"Back when we went through our near-death experience, we knew that immediate financial results had to matter above all else. We were too unstable to do anything else. But now I see that the era of instability ended years ago and we missed the shift. We kept acting like we were still back there, fighting for our survival, when we needed to move forward into a different era -- one focused explicitly on building the next generation of leaders for the firm."

"What was the impact of staying focused on survival?" I asked.

"Well, we obsessed with delivering immediate financial performance above all else. Our new people caught that bug and internalized it. But they caught a mutant form of the bug."

I was curious. "If the first era was about survival, what should the second era have been about?"

She picked at her salad for a minute and then said, "Once we made it through the survival era, we really needed to build a culture that would produce a generation of leaders who would take our company from survival to enduring excellence. I'm concerned that without that cultural glue, our next generation might not do what's in the overall firm's best interest. As smart as our people are, the firm could eat itself alive." 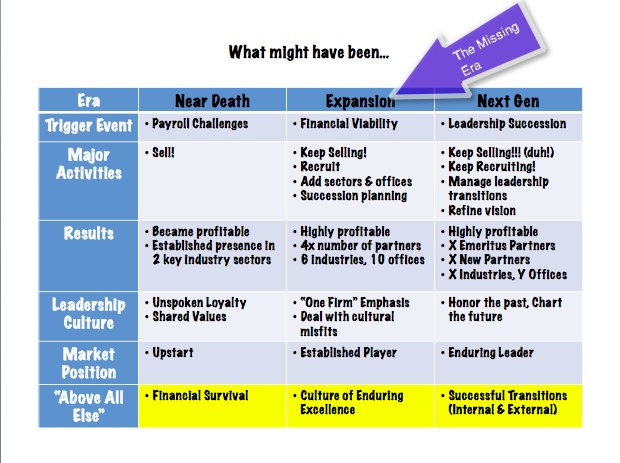 You're probably wrapping up planning for 2013 right now. Why not ask a few perspective-building questions:

Everyone needs an "above all else." Just make sure it's the right one for the era you're in.