Mexican actor Adan Canto is bringing the heat to “X-Men: Days Of Future Past.”

The star plays Brazilian mutant Roberto Da Costa, “Sunspot,” in the upcoming superhero blockbuster. Canto, 32, is set to make his debut on the silver screen on Friday.

Born in Acuña, a city in the Mexican state of Coahuila, Canto moved to Del Rio, Texas in his teens and later set on to fulfill his dream to become an actor. With roles in series like “The Following” and “Mixology” under his belt, the star is joining Hugh Jackman, James McAvoy, Michael Fassbender, Jennifer Lawrence, Halle Berry, Ian McKellen and Patrick Stewart in the newest installment of the “X-Men” franchise.

But before his big premiere, the actor sat down with HuffPost to talk about how he prepared to do his own stunts and his experience as a Latino in Hollywood.

What did you enjoy the most about being “Sunspot”?

What I enjoyed the most was playing, becoming that little boy again, doing what I liked on the set with the wardrobe and the special effects prepared, imagining anything and living it -- more than acting it’s really personifying it. [It] was like being a kid again, the one that was always being scolded because he couldn't stay still.

Were you free to improvise on the set?

In the action scenes, yes. The scenes where there’s a dramatic line or something specific in the story that needs to be established, it’s not necessary because [the film] is so well written that I don’t think there’s a lot of need to improvise in those cases. But in the physical sense, yes.

Do you like using stunt doubles or do you do your own stunts?

No, I wanted to do them. I had stunt doubles and I would stand looking at them and no, I didn’t want [to use them]. I went up to them and ask them to please let me do them and they put the suit on, a skin-tight red latex suit with black dots for the special effects, and they let me do my own action scenes.

And I suppose you really enjoyed that?

Of course. I prepared a lot for them. I’ve always liked to run and that’s how I stay in line, not only physically but also centered. Running, cycling, swimming and yoga now too. When I found out about the character I added a lot more physical elements to my training to be prepared for anything.

Hollywood has changed a lot when it comes to Latinos, we’re more involved and everyday there’s more acceptance. How do you feel in Hollywood?

Very good, there’s a lot of opportunity right now. There’s big projects that are in progress both in film and television, talented writers with great stories and complicated characters... I honestly feel very blessed to have a job like this.

During auditions did you ever feel discriminated? Or were you ever asked questions that seemed out of place, like “Oh, you’re Latino?”

Fortunately no, if there was ever anything like that I never noticed it and must’ve laughed along with them. I’ve never felt rejected, on the contrary, I feel like there’s a lot of work happening among people from all over the world in the industry.

"X-Men: Days Of Future Past" debuts nationwide on Friday, May 23. 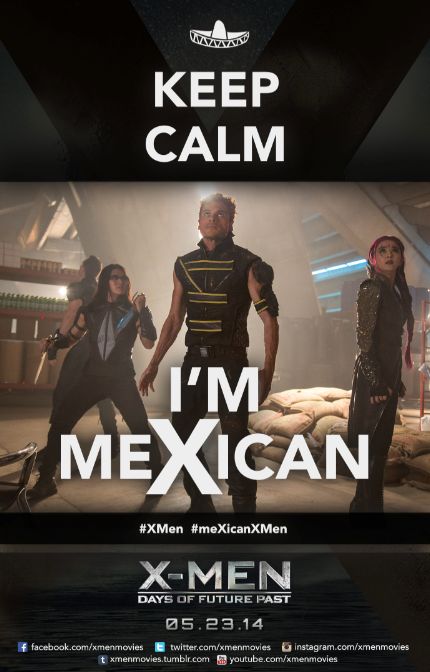