Chinese special operations forces are training in the Western deserts of Xinjiang in complex search and rescue missions, in environments that closely resemble North Africa or certain parts of the Middle East. These newly-trained military forces have recently been empowered by a new counterterrorism law passed in December that grants the Chinese military authority to venture overseas to protect endangered PRC people and property.

For many in China, the legal ability to project power anywhere in the world to protect its citizens and investments felt long overdue. After all, China has investments and people in almost every country, particularly in high-risk nations in volatile regions such as the Middle East and North Africa where dozens of Chinese nationals have been targeted by Islamist extremists in recent years.

The vulnerability of Chinese citizens abroad and the necessity to do something to be able to protect them came into clear focus last November when Fan Jinghui was killed by Islamic State militants in Syria and when three Chinese nationals were killed by Al Qaeda militants during a hotel siege in the Malian capital Bamako. While dramatic, these two terrorist events were by no means isolated incidents, particularly in Africa where Chinese people are frequently targeted for kidnapping. In Angola, the situation is so dire that a senior embassy official warned Luanda that unless the government does something to bring the hostage-taking of Chinese nationals under control, it could affect PRC investment in the country. There have also been a number of Chinese kidnappings in Cameroon and South Sudan among others places in Africa. 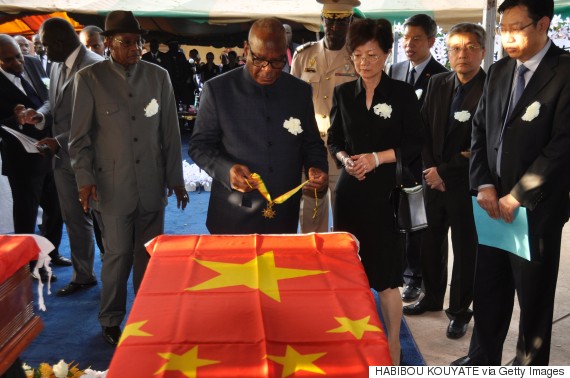 China's ambassador to Mali stands alongside Mali's president at funeral of three Chinese nationals killed in an attack at the Radisson Blu hotel. (HABIBOU KOUYATE/AFP/Getty Images)

But there's a problem...

The Chinese are seeking to develop similar force projection capabilities as the United States to be able to deploy either special operations teams for highly specific missions or to be able to mobilize large numbers of ships and planes for mass evacuations as happened in Libya and Yemen. While on many levels this all makes sense, until one considers that the foundation of modern Chinese foreign policy is anchored firmly in the non-interference doctrine established by former Premier Zhou Enlai in the 1970s.

By definition the deployment of military forces into another country is an act of intervention in that country's internal affairs, regardless of how noble China's mission may be to rescue its citizens or protect its investments in that country. So China's increasingly sophisticated military resources now have the ability to inject themselves further afield, but doing so may force Beijing to abandon, or at least "evolve," its non-interference policy.

Two Chinese foreign policy scholars, Jonas Parello-Plesner and Mathieu Duchâtel, recently explored this burgeoning dilemma in a new book "China's Strong Arm-Protecting Citizens and Abroad." Parello-Plesner joined Eric & Cobus -- in the podcast above -- to discuss how the Chinese government is rapidly escalating its power projection abilities while simultaneously re-orienting its policy framework to accommodate the government's pressing need to protect its people and property abroad.