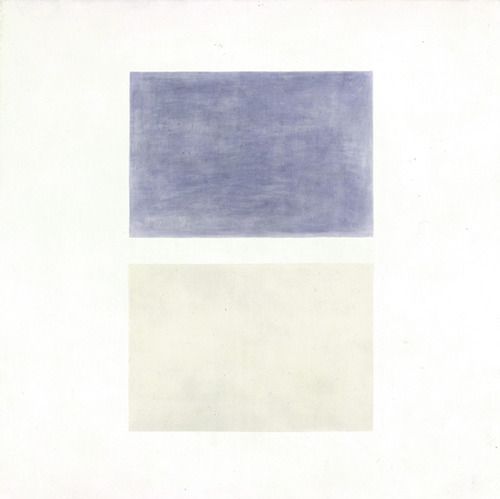 In the monograph Agnes Martin (D.A.P./Tate), the work is described variously as ascetic, immensely fragile, calm, direct, hypnotic, quiet and inward. Martin says her subjects are lightness and formlessness. Her work is so interior it does not invite more concrete description.

After abandoning painting for years to drive across the country alone seeking "silence and solitude," Martin moved from New York City to Taos, where she spent the rest of her life creating grids or parallel lines in muted palettes, devoted to what has been called "the quiet drama of painting continuously for almost three decades."

She often drew her grids by hand, in graphite pencil, imparting a tremolo, her "autographic trace," allowing her humanity to enter geometric forms. These flawed lines may also have been a nod to wabi sabi, the Japanese aesthetic tradition of finding beauty in imperfection, implying the quiet melancholy and ethereal longing accompanying acceptance of the impermanence of the world.

In her essay, The Untroubled Mind, she writes:

Martin has been compared to Paul Klee and Kandinsky, but she resisted modern movements. Initially seen as an Abstract Expressionist, she later appeared to be a Minimalist. When asked which group she belonged to, she replied, "I would like my work to be recognized as being in the classical tradition (Coptic, Egyptian, Greek, Chinese), as representing the Ideal in the mind."

She was inspired by William Blake, whose watercolor illustrations for Pilgrim's Progress she saw at the Frick Collection while living in New York. A gift from her beloved grandfather, Pilgrim's Progress remained meaningful throughout her life. The book may begin to explain her mysterious departure for the desert.

One of the last paintings she made in the city was called Trumpet, and may have referred to a section of Pilgrim's Progress called The Man in the Iron Cage. After hearing a trumpet call in a dream, a man wakes shaking with fear. He says, "I thought that the day of judgement was come, and that I was not ready for it." Martin's painting, Trumpet, is a grid hand drawn in graphite, covered in soft strokes of luminous paint in a palette ranging from dove grey to pearl white. The grid may refer to the iron cage in which the man is held.

Blake painted his version of The Man in the Iron Cage in watercolor, with the grid of the cage partly obscuring the man's body. Bunyan writes that the man in the iron cage is a former professor now jailed by his own despair at succumbing to "the lusts, pleasures, and profit of this world; in the enjoyment of which I did then promise myself much delight: but now everyone of those things also bite me, and gnaw me like a burning worm." 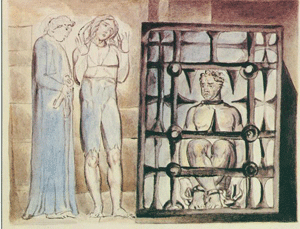 William Blake, The Man in the Iron Cage

Blake's illustration of the iron cage may have inspired Martin's later work, as her delicate paintings are illuminated like watercolors, and his palette in this work, pale blues, pinks and greys, are reflected in Martin's own. The iron cage, or all it represented in Pilgrim's Progress, is what she devoted her life to escaping. 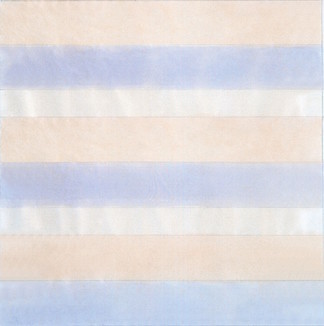 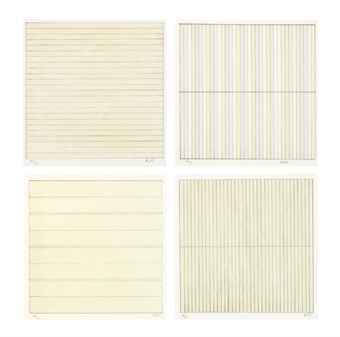 Her writings record this pursuit, resembling Blake's collection of metaphysical aphorisms, "All Religions Are One / The Voice of One Crying the Wilderness" in which he sought the origins of philosophy and religion. When Martin retreated to the desert, she read deeply in Eastern and Western spiritual traditions, including Calvinism, visionary Christianity, Platonism, Transcendentalism, Zen Buddhism and Taoism, noting significant quotes and impressions.

She was especially drawn to Plato's Allegory of the Cave, in which the world is revealed to consist of shadows cast by ideal forms. The highest goal is to turn away from the shadows and see what is real. In The Untroubled Mind she writes:

It seemed natural to her to disregard shadows and look only at what was real. She had devoted her life to it.