All signs point to the fact that, on the whole, the U.S. is moving toward a much more tolerant stance on same-sex marriage and LGBT issues, in general.

A recent survey released by the Public Religion Research Institute (PRRI) delineated the ways in which Americans' beliefs surrounding LGBT issues have shifted. Included in this was the fact that far fewer Americans today believe AIDS might be a punishment from God. 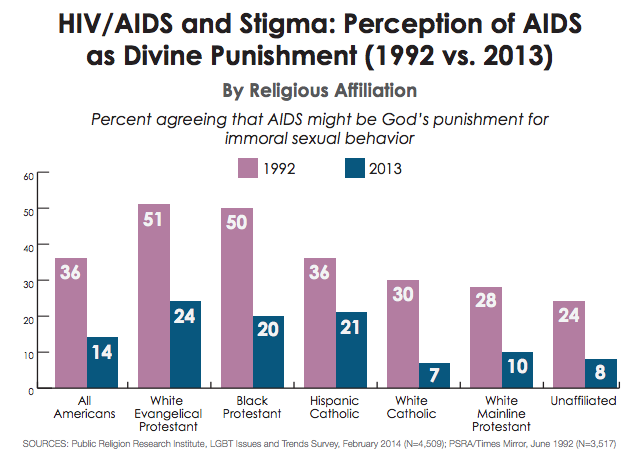 Since the outbreak of AIDS in the early 1980s, some conservative religious groups have come forward to loudly blame so-called "immoral" lifestyles for the epidemic. In 1987, Reverend Jerry Falwell famously said, “God destroyed Sodom and Gomorrah primarily because of the sin of homosexuality. Today He is again bringing judgment against this wicked practice through AIDS.”

Today, such antagonistic attitudes toward homosexuality are turning younger members of religious groups away from their congregations. The same PRRI survey found that nearly one-third of Millennials who left the faith they grew up with did so in part due to "negative teachings" or "negative treatment" related to gays and lesbians.