More than 84 million Americans are expected to travel over the holidays this year, and 42 percent plan to fly to their destination. As this is the busiest travel time of the year, I started thinking about how travel, particularly air travel, has drastically changed over the last several decades. Some of these changes have been for the better, while others leave much to be desired.

It's hard for me to remember what air travel was like in the days before lengthy airport security measures, the threat of needles in onboard meals, strict carry-on liquid restrictions, long flight delays, overworked and underpaid flight attendants, and the list goes on and on.

Here are a few of the most annoying changes that I've personally witnessed over my 30 plus years in the travel industry.

There used to be something known as an all-inclusive ticket price.

This covered your fight, your seat, and various amenities that you assumed you would get, like a beverage and even a pillow if you needed one. Today, while the cost of air travel has drastically increased, reflecting fuel surcharges, airline taxes, and fees that are now included in the price of a ticket, those nice amenities, like a meal, a pillow and an assigned seat, are gone. If you want them, you need to pay for them, on top of the airfare.

Traveling with luggage is no longer a right; it's now a convenience that will cost you. This has left passengers scrambling to fit as much as possible into their carry-on bags, and makes the boarding process a free-for-all to claim the limited overhead space. And in some cases today, you pay for the carry-on bag, too. Need to take an extra set of clothes or toiletries with you on that flight? No way, unless you pay.

Flying used to be an event for travelers.

Back when airplane travel became mainstream, it was considered a luxury. When I first began flying, the experience started when you got to the airport. You even 'dressed up' for the occasion. There was camaraderie among passengers, because people felt lucky to be able to fly. Over time, the industry has eroded into a mode of mass transportation. Now, most travelers spend the majority of their time glued to electronic devices or counting down the hours and minutes until they reach their final destination. The reason for the latter scenario is due, in large part, to the next topic.

Customer service in the airline industry was once as good as that of a five-star hotel.

Travelers are the reason airlines are in business, but sometimes it seems that the airlines have forgotten this. It wasn't that long ago that travelers could reserve a specific seat on an aircraft at no extra charge. Today, airlines have made it increasingly difficult to even reserve a seat together with your travel companion until you check-in on the day of the flight. Even more upsetting, families who travel together often get split up and are left hoping that the passengers nearest them will be kind enough to switch seats, which can be a high hope if those passengers have also paid extra for their window, aisle, exit row, or bulkhead seat

This just scratches the surface of how our airline industry has changed over the years. Frankly, my imagination is not rich enough to contemplate what the future of the industry might hold, but in the meantime, here's an infotoon that takes a humorous look at air travel then and now. 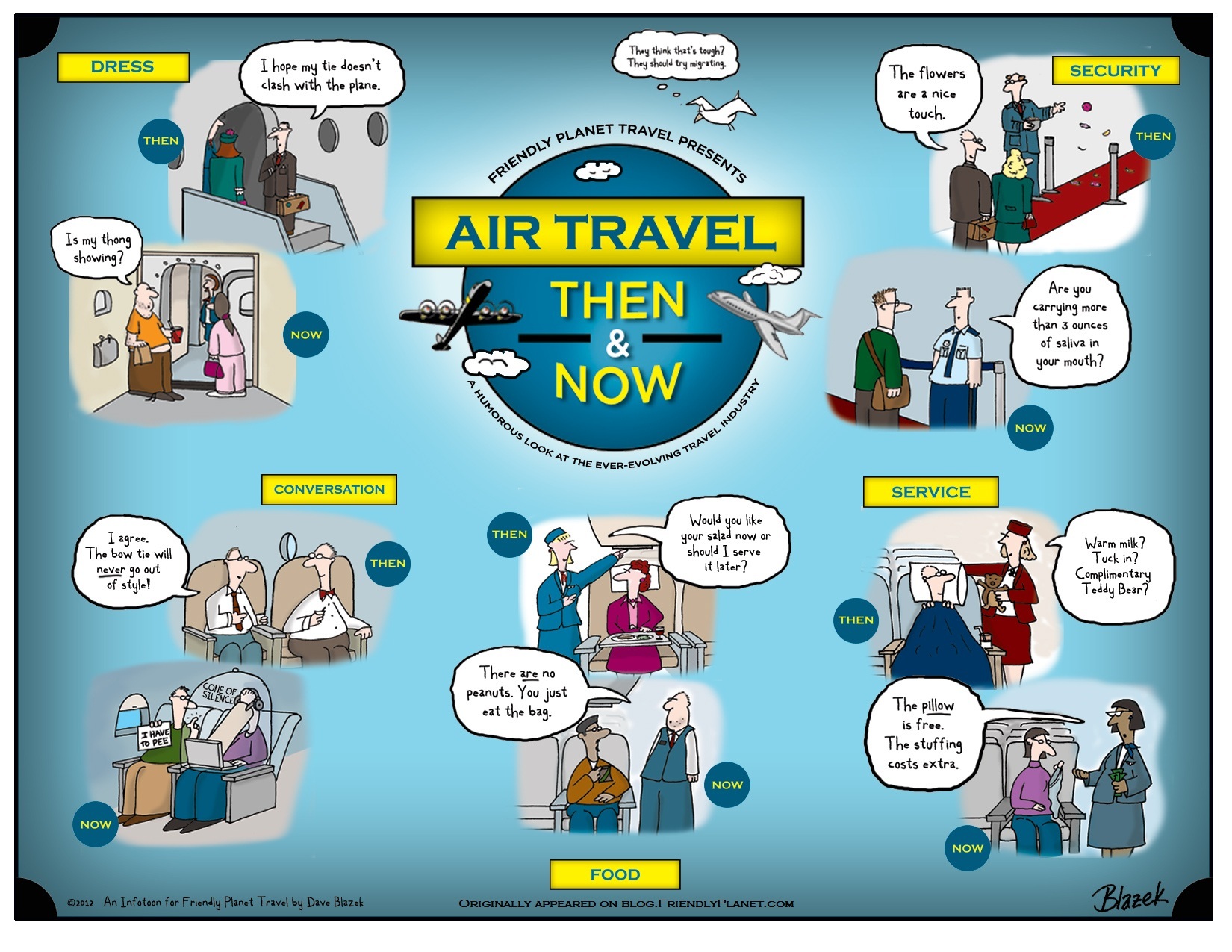 What changes have you seen in air travel that makes you reminisce about how it 'used to be'? I'd love to hear your thoughts in a comment below.