If you're familiar with the 2009 science fiction film, "Avatar," you may have enjoyed the beautifully lush extraterrestrial glowing rainforest. But the other worldly glowing rainforest that I experienced was far closer to home, in the Peruvian Amazon of Tambopata this past March.

I should start off by mentioning that I'm an entomologist, and part of my job involves searching for Neotropical insects and investigating their bizarre behaviors. This leads us to of our first bioluminescent critter:

These are the larvae of click beetles, which are in the family Elateridae. While over 10,000 species of click beetles are known worldwide, only a couple hundred species display bioluminesence. The larva pictured above likely belongs to the genus Pyrearinus, but we don't know the species yet. In any case, we think they utilize their bioluminesence, which only occurs in glands near their heads, to attract insect prey. With their natural light trap, they snag unsuspecting victims with their mandibles and pull them into the abyss of their tunnel. 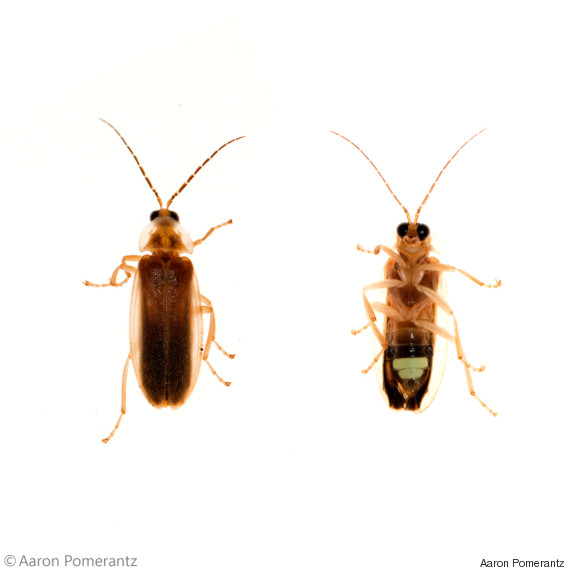 Next up on the list, we have the more commonly known fireflies, which are beetles in the family Lampyridae. The adults light up the sky near the river each night in order to attract mates. Males and females flash bioluminescent signals from special cells in their abdomens at just the right intervals and frequencies to catch the attention of the opposite sex of the same species. 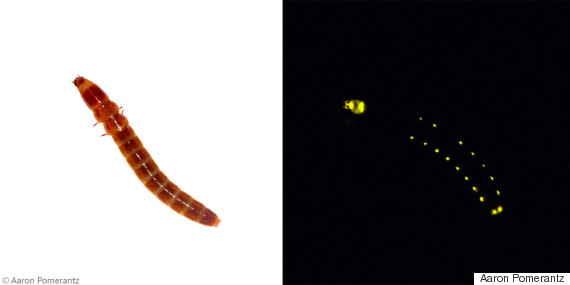 The third bioluminescent organism was a big surprise. Crawling in the leaf litter was a railroad worm in the family Phengodidae. This is a less well known family of beetles whose members display bioluminescence and they also have another bizarre characteristic in which the female beetles are "larviform,"meaning they are fully developed yet still appear much like larvae. Check out the video of our railroad worm showing off its glow in Tambopata:

And last but not least, as we were taking pictures of the railroad worm we noticed something else strange. After we killed our headlamps, the ground around us appeared to start lighting up. While we thought we must certainly be going crazy with all this bioluminescence on the brain, our eyes adjusted and the leaves were indeed glowing. Or more specifically, the fungi growing on the decaying leaf litter was glowing.

I still have no idea why this particular fungus was emitting light. I'm aware that some fungi are bioluminescent to attract insects at night to move spores around, but something tells me this is different. The glowing is incredibly faint and it's not the fungal spores that are glowing, but rather the mycelium. What purpose would this serve? I've heard an explanation that the fungus sequesters a large amount of phosphorous and this is what causes the glow, but I'm still searching for a concrete explanation and species identification for this fungus.

So there you have it! Several species of glowing insects and glowing fungi condensed in one area. It really felt like we were in the rainforest of the "Avatar" movie, only even better because it was real life! We found all of these incredible glowing organisms near the Refugio Amazonas jungle lodge in Tambopata, Peru, so if you're curious about discovering some bioluminescence of your own, come here and check it out!

To find out more about these discoveries visit Rainforest Expeditions and check out more amazing videos on their YouTube page.