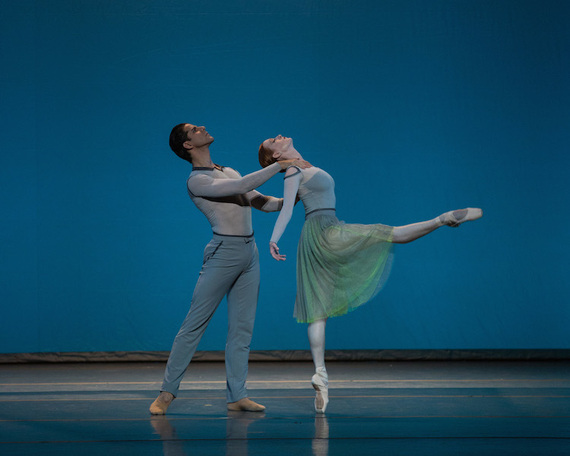 Jessica Lang, award-winning choreographer who has had a long association with the Joyce Theater, has choreographed her first ballet for American Ballet Theater, titled Her Notes, to the piano music of Fanny Mendelssohn Hansel, the elder sister of Felix Mendelssohn.

The music is noteworthy because the compositions of Fanny Mendelssohn Hansel have largely been unknown - it wasn't considered acceptable for a woman of her time (1800s) to publish music - but she wrote over 400 piano pieces (a few published under her brother's name). Lang chose excerpts from Das Jahr, which I thought was beautifully Romantic (comparable to Chopin, perhaps) and gorgeously played by pianist, Emily Wong.

The performance opened with dancers posed behind a scrim (the fine stage design was by Jessica Lang, as well). With a window inset in the scrim, the ballerina steps through to commence the dance. The lighting (designed by Nicole Pearce) subtly changed to highlight the mood.

The pretty and appropriately Romantic costumes were designed by Bradon McDonald, a highly regarded former dancer (with Mark Morris' company), who went back to school to study fashion design (and in fact, was a finalist on TV's "Project Runway"). He costumed the women like modern versions of classical ballerinas in knee-length chiffon skirts in shades of blue and light green.

Avoiding sentimentality, which paralleled the music, Lang has created a beautiful piece of modern ballet, and American Ballet Theater dancers showed they are exquisite artists. The jumps felt easy. The ballerinas bourée en pointe, skimming across the floor as if weightless. The partnering seemed effortless. All very light and airy, and lovely. It was tasteful, substantial and very satisfying. I can't wait to see it again.

Also on the program was Serenade after Plato's Symposium, choreographed by Alexei Ratmansky to the music of Leonard Bernstein (with an outstanding performance by violinist Benjamin Bowman). Bernstein's symphony (sounding sometimes like his movie score for On the Waterfront) is more modern and edgier than Fanny Mendelsson's piano piece, and that can be said of the choreography, too. It emphasized the vigor of the men of ABT, giving each man an opportunity to show off his dancing prowess, while also being part of the whole dialogue-in-dance. Hee Seo, the only woman in the cast, has a very dramatic entrance. I had reviewed this piece previously, and it stands up to another viewing. It is just terrific, and one might argue that it's an interesting masculine contrast to the feminine Her Notes.

Finally on the program was The Brahms-Haydn Variations, a Twyla Tharp-choreographed ballet from 2000. ABT is a huge company and Tharp seems to have used as many of the dancers as she could fit on the stage. There were mostly formal, classical steps, and the modern ballet lacked any of the quirkiness or originality that I associate with Tharp. With all those legs doing arabesques and arms stretched out in various directions, it was all sort of confusing and dizzying, and kind of irritating. I think that this proves the old adage: less is more.

Overall, the dancers of American Ballet Theater demonstrated that they deserve the reputation of being one of foremost ballet companies in the world. Although the principal dancers were highlighted throughout (Gillian Murphy, Misty Copeland, Isabella Boylston, Marcelo Gomes, among others), these ballets were ensemble pieces, allowing the whole company to shine. And shine they did.