"What Would You Do?" by ABC is a hidden camera series where people are put into ethical dilemmas, given the choice between passively accepting injustice and standing up for what they believe is right.

This soldier didn't hesitate to speak up when a young man started harassing a Muslim cashier, refusing to be served by him because "he's a Muslim."

The uniformed man defended freedom of religion for all, stating, "We live in America, he can have whatever religion he wants."

"That's the reason I wear the uniform -- so anyone can live free in this country." 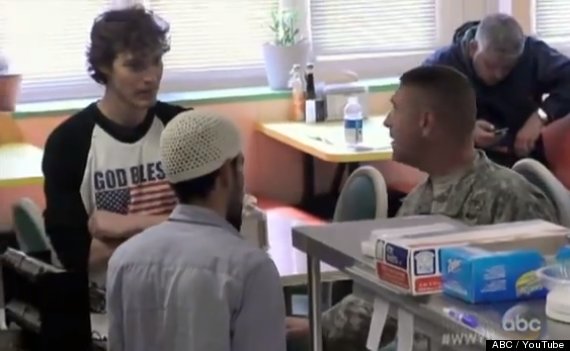 When the producer arrived on the scene to explain that the heckler and the cashier were both actors, the soldier downplayed his "heroic" response by saying, "If you're an American, you're an American. Period."

Well said. Watch the video for the full encounter.

American Soldier Responds To Anti-Muslim Comments In An Incredible Way on 'What Would You Do?' (VIDEO)
Quotes By Inspiring Religious Thinkers