While many of our stories feature families who have existing foster placements or have already adopted, this week’s installment of the Huffington Post Gay Voices RaiseAChild.US Let Love Define Family series features a couple from Pennsylvania who are in the early stages of the process. Ami and Val capture some of the uncertainty and excitement experienced by couples across the country who are in process and waiting.

Ami Lanning, 43, and Val Minett, 48, of Zionsville, Penn. are one of many couples from across the country who have contacted RaiseAChild.US for information and support as they explored their options for family building. Two years after the longtime close friends began dating, they married each other on the beach in Provincetown in 2005. Today, they live on five acres with a fishing pond and a house full of pets: four dogs, two parrots, a few other small birds and some tortoises. Both women work for one of the nation's largest insurance companies, one that offers them some flexibility in their schedules. With a great network of family, friends and coworkers, the couple felt they were in a great position to add to their family.

Ami and Val began pursuing foster/adoption in November after reading several articles in the Let Love Define Family series. This week, they were delighted to welcome a little girl to their home. Not all placements happen so quickly -- it helped that they completed all the paperwork before the conclusion of training classes -- but the placement process also does not have to be exceedingly long.

When RaiseAChild.US spoke with Ami and Val, they had just been notified of a possible match with a foster child and were waiting for a home safety inspection in order to be cleared for placement. A heavy snowstorm postponed the inspection by a few days.

Like all prospective foster/adoptive parents, the couple was allowed to specify what they felt would the best match for their family.

“We asked for a child between ages 3 and 10, any race,” said Val. “We prefer a girl, only because we know less about raising little boys. But we will take sibling groups and, of course, if there are boys in the sibling groups, we will take them. We would love to have a girl and a boy at the same time.”

Ami and Val were informed the week before the interview with RaiseAChild.US that there was a possible match with an 8-year-old African American girl. Talking with an anticipating couple, rather than a family that has already received a placement, gave us an opportunity to discuss the mixed emotions at this stage of the process.

While the couple was excited, they were also nervous. As they waited for more news, the couple sent a list of questions to the girl’s caseworker. Opening up to the new possibility means putting their hearts on the line.

“It’s hard to know what to expect,” said Val. “We were given us a few other details, including her name, that we are not sharing due to privacy concerns. We have been preparing for an 8-year-old girl. If that doesn’t work out, we may have to make some changes to the décor, but that’s O.K.”

The timeline from signing up for an orientation to receiving a placement was fairly short, but the decision about whether and how to become parents took seven years.

“I’ve always felt I needed to open my home to these kids,” said Val. “It has bothered me that these kids were viewed as throwaways, that people had misconceptions about these kids, about their behaviors and their intentions in life. It’s always been something that I’ve just been called to do. Ami wanted to try to have a child through alternative insemination, though. She got scared by the doctor pretty good because of some minor health issues and discrimination challenges. I was supporting her in that, but it wasn’t my particular preference. In the end, she decided not to go that way.”

While Val has always wanted to adopt from the foster care system, Ami took longer to get on board.

“We have been talking about this for years and, honestly, I was a little nervous,” explained Ami. “All you read are the ‘bad’ things until somebody like RaiseAChild.US puts out these great articles in The Huffington Post. Val was initially talking about fostering, but I always wanted to bring people into our family permanently. Until I started reading your articles in The Huffington Post, I didn’t know there was a resource out there for LGBT families that could help us find a state agency to work with… or someone who wasn’t going to look at us cross-eyed, or make us feel funny. Once I ran across you guys and sent an email and you came back with options, it was totally on then. I felt so great that we knew that we could find a local agency that would not be weird with us.”

Val said that the specific catalyst in the Let Love Define Family series was an article about Ruben, a 17-year-old foster youth in search of a permanent family. The touching story helped motivate Val and Ami to move forward with their foster/adoption plan. They signed up for a Dec. 19 orientation at an agency located only 20 minutes from their home.

“That was the beginning, the real beginning, we were committed at that point,” said Val. “We wouldn’t have gone to the orientation if we didn’t know we wanted to do this.”

Fears about discrimination and cost are common concerns of LGBT prospective parents. Ami and Val stated that their agency treated them “exactly like everybody else” and that they experienced no discrimination. The costs, they said, were mostly those they have taken on by choice. The only outlays they cited were for background checks and childproofing their house, although they are considering major renovations to the second-floor of their home. In Pennsylvania, parents receive a monthly stipend for foster children and are eligible for the state’s Medical Assistance program until age 18.

What would they say to prospective parents who are interested but hesitant? How would they encourage people to take that first step by attending an orientation?

“Because I was the one who was more on the fence, I would say to people just 'go for it, go get more information,'” said Ami. “If you want a family, there are so many kids out there that need a family. You can make a difference for that child, even if it’s just for a little while.”

“One of the things that struck me the most during orientation was the fact that even if a child was only placed with you for a couple of months, the positive difference you could make in that child’s life by offering a stable and loving environment, just encouraging them to heal, and be all they can be, what better thing can you do in this life, really?”

We asked the couple what hopes and dreams they have for their children.

Val jumped in right away. “That they feel safe. That they learn to trust again. That they know that they always have a home and family, and they develop into everything that they are supposed to be, with lots of love.”

Ami and Val are only one of more than 100 prospective parents that have contacted RaiseAChild.US since the series debuted last November. “I don’t even know what made me click on Ruben’s story,” says Ami. “I read the Huffington Post every day. I somehow discovered the whole series. I didn’t even tell Val at first that I contacted you guys. I just want to thank you, because your Parent Advocate Jason got back to me right away, and he was so nice, open, and encouraging. With the stories you are sharing in that series, if you help just one more kid to find a safe place to land, God bless you, honestly, thank you.”

As they open their hearts to this little girl who was placed with them, the couple remains reflective about the future. “There may be other families who are better-suited for her, and she’s in another school district,” said Val. “We want to make sure wherever she goes, it’s the best place for her. We are not going to get our heart set on it. We know the right child for us is out there, whether it’s her or someone else.”

Corinne Lightweaver is Special Projects Manager at RaiseAChild.US, a national organization headquartered in Hollywood, California that encourages the LGBT community to build families through fostering and adoption to serve the needs of the 400,000 children in the U.S. foster care system. RaiseAChild.US works with foster and adoption agencies that have received training in LGBT cultural competence through the Human Rights Campaign Foundation’s “All Children – All Families” initiative. Since 2011, RaiseAChild.US has run media campaigns to educate prospective parents and the public, and has engaged more than 2,000 prospective parents. For information about how you can become a foster or fost/adopt parent, visit www.raiseachild.us and click on “Next Step to Parenthood.” 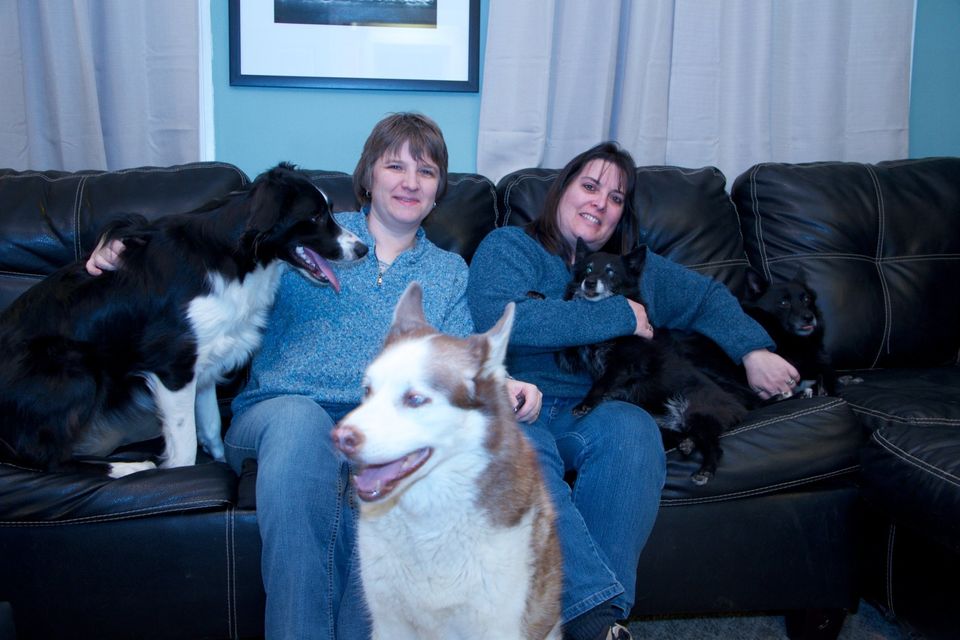 1 / 3
As prospective foster and adoptive parents, Ami and Val took this photo for their family profile in January of this year. The couple shares their large property with dogs, birds, and tortoises.
Let Love Define Family