Yeah, yeah, lots of New Yorkers remember the old days when the streets were dirty, the drugs were cheap, and the only Mickey Mouse you'd see in Times Square was tattooed on a dancer's ass. But how many can actually say they were that dancer (sans tattoo, I assume)? Well, Vanessa del Rio, for one.

Del Rio has managed to live on, though, becoming a hip hop icon, a mainstream actress, and the subject of a TASCHEN biography.

The Huffington Post caught up with the "Black Marilyn" via email to discuss the death of Times Square, subway groping, and, of course, Sarah Palin.

Well, this nice girl from Harlem was born with a rebellious free spirit, firmed up by Catholic school and growing up an isolated only child, not allowed out on the streets because my parents thought they were too dangerous, leading me to live in my head -- with all the sexual fantasies I couldn't discuss with anyone.

What lead to the decision to start making adult films and how did you first get into it?

Being raised so strict made me want to experience everything I was warned against. I left home at an early age because of these restrictions, and walked right into the wild life of the streets, the sex, drugs, rock-n-roll -- and let's not forget disco -- lifestyle of the East Village in the 70s.

Do you still live in New York?

Yes I still live in Nu Yawk, where I run my website (here comes a plug!) VanessadelRio.com.

After doing over a 100 adult films, you started working with hip hop stars -- getting name-checked in songs and appearing in the video for Junior M.A.F.I.A.'s "Get Money." How did that happen? 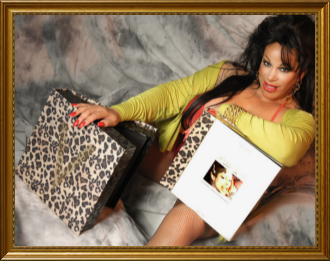 You're doing a signing event for the TASCHEN biography that calls you "America's first Latina star" -- do you feel that's an accurate title? Are you a fan of any of the current Latina stars?

Aside from the recent terrorist attempt, do you prefer the old Times Square to the new "Disney"-fied one? I would imagine you had a lot of fans around there back in the day.

Yes, darling, I do prefer the ol' '70s Duce to the modern "Disney"-fied one. You had to have been there to appreciate it. It's where I walked the streets as a prostitute, where you could buy a joint in a legit theater and smoke it in your seat, where I danced as Vanessa del Rio at Show World, the world's biggest sex emporium, now closed, and where pimps cruised all night long in pink Cadillacs.

But life goes on and perhaps one day The Duce will return with a Total Recall twist! And yes, I was very well recognized and respected back then.

Do you ever get hassled on the street by people who recognize you?

Never been hassled, but often get recognized!

The incident that stands out for me is when a staggering derelict bum muttered my name as I walked by (near Grand Central Station). I just kept walking, and he all of a sudden got lucid and yelled, "Hey, I spent a lot of quarters on you!"

I smiled at him, amused and giggling, but still kept walking!

You're probably pretty liable to be a target for a subway groper or two.

You devil, you read the book didn't you!? I have had my share of subway encounters and it's all in there... including the dwarf who chased me through the subway with his hard dick in his hand. Guess I shouldn't have encouraged him!

It's all deliciously pervy stuff -- well, with our attitudes back then it was, nowadays I guess it would have a more sinister feel.

Kristin Davis, the madam who allegedly supplied prostitutes to former-Governor Eliot Spitzer, is now running for governor herself. Any interest in throwing your support behind her?

Hey, if Sarah Palin made it to the podium I'm sure Ms. Kristin Davis can at least get near it. Just think if a Madam ran the state: there'd be clean sheets in every home, and a penis check before any politician stuck it to the citizens. We know that won't pass!