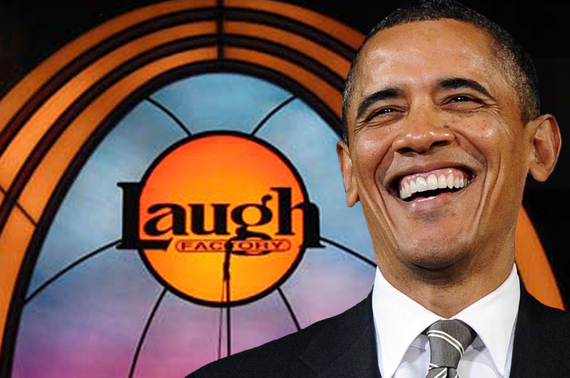 This is a desperate plea from the comedy community. Comedians are visionaries; they identify the subjects that require the most attention and then they incorporate these issues into their material. While their material is generally funny, there is a sad and unnerving truth behind it -- as there is behind much humor. Even before the nation's media started talking about it, I heard many of the Laugh Factory comics using the relationship between the police and the community and their unwarranted use of force, as part of their stage material. Now they are talking about Ferguson, New York, and some have even found a way to be sensitive about the awful incident in Cleveland where a 12-year-old boy, playing by himself, was shot and killed.

Mr. President, with all due respect to you, they are talking about how you are not doing anything about this -- especially considering you are a minority yourself.

Although I see a lot of policemen putting their lives on the line and most of them protect us and are brave, the message I get from the comedians is that some policemen too often become judge, jury, and executioner.

The question I keep hearing from the comedians at the Laugh Factory is how come the policemen don't go after the people who work on Wall Street? Mr. President, why have you not enforced the laws when it comes to Wall Street? Laws are apparently roughly enforced for selling loose cigarettes, so maybe you can explain why nobody working on Wall Street has been shot or put in a chokehold. Is it because they are rich and powerful? In an office? White? It seems that the only people who are getting hurt and shot are poor people and minorities. Considering that both you and I are minorities, I think we should really give these matters much more attention.

You may be wondering why I am pleading to you regarding this most urgent matter; it is to encourage you to use your executive powers as the president to improve things. Some of our greatest presidents, like President Kennedy, committed himself to sending people to the moon, and he did it "not because it was easy but because it was hard." He committed himself, and although people said it was impossible, it got done.

I think in every presidency there comes a time when a president commits himself to doing something people think is impossible. That is why for your last two years in office, you should commit yourself to changing the way law enforcement operates in this country. Instructing NASA, the CIA, and other top research government agencies to create a gun that does not kill, but paralyzes its targets. Such a gun will certainly save a lot of innocent lives, improve relations with the police and their communities, and have no negative impact on the police to effectively do their jobs. With such a gun, instead of killing suspects, police would be able to detain them, and we can then see our great justice system decide their guilt or innocence, and if guilty their punishment.

If we could shoot animals from 100 or 200 feet and paralyze them after a second, why can't we do that to a human being? Are our lives worth less than an animal? A few years back, a mentally unstable woman with a shopping cart and a knife was shot dead by two police officers on a residential street in Los Angeles. Was there not an alternative available?

So I beg you, and the comedy community begs you, to have the chutzpah to put our tax dollars into developing such a weapon so that innocent people will no longer get killed and our country no longer looks like it's the Wild, Wild West.

I like the way Attorney General Eric Holder is trying to help those innocent people who crowd our jails because they have a little pot with them. Because they are minorities they are serving years in jail for a minor offense. We need to shift our focus to the more damaging crimes, such as white collar crime, Medicare fraud, identify theft, computer hacking and political and financial crimes. These cause just as much -- if not more -- harm to citizens in this country and yet they are not the focus of our law enforcement. Why? Because these crimes are mostly committed by non-minorities?

People smoking marijuana for medical reasons or smoking it for recreational reasons are not harming anybody, and yet we are putting them in jail. What about the people who have cheated tax payers for billions of dollars? Where are their severe punishments? Maybe it's called "white collar" crime not so much for the color of the collar as for the color of the skin.

We know the gun and financial lobbyists are among the most powerful in Washington D.C. We need to have a president -- and a congress -- with what Madeleine Albright called the "cojones," to stand up to them, and do what is best for our country not what is best for these dangerous special interests.

You could save this great country of ours. You can go down in history as one of the greatest presidents. Make these changes and I'm confident that the comics will shift to subjects better suited to ridicule.

On behalf of all the Laugh Factory comedians, I thank you.