Perhaps constituents want an actual word from on high?

A North Miami mayoral candidate who claimed to have been endorsed by Jesus Christ finished last in voting on Tuesday.

Pierre earned just 56 votes, according to Miami-Dade Elections -- and she noted in an accusing, caps-filled Facebook post that one of those votes was her own.

They claimed I only have 56 votes - YOU CAN BELIEVE THEM IF YOU WANT - I know they are corrupted and some members of the current ADMINISTRATION were ready to do anything to have their protege elected to (perhaps) prevent their butt from going to jail in the near future. BUT I NEVER EXPECTED THEM TO GO THIS FAR.

To this, I'll make a correction - since I voted for myself also - I will say that I AM GIVEN ONLY 55 VOTES FROM ALL THE BALLOTS THAT WERE CAST FOR ME. Well, I am strong & I can take it. REMEMBER THAT I AM NOT ALONE. I AM A TRUE CHRISTIAN WOMAN. NOT ONLY I AM COVERED UNDER THE BLOOD OF JESUS...I AM SWIMMING IN IT...

Then, referring to Satan, she said North Miami chose "Luciefer (sic) over Jesus."

Pierre's campaign added a dash of flavor to an already dramatic race for mayor of North Miami.

Seven candidates lasted long enough to make it onto the ballot, and one of them was punched in the mouth last week at his campaign headquarters.

And then there was Pierre, who was a pop star in Haiti before moving to the U.S. and becoming a nurse. Her campaign first made headlines when she claimed to have found evidence of a Vodou curse against her, and a heavily used campaign flyer ran a picture of Jesus with the words "Anna Pierre, RN is endorsed by Jesus Christ."

Tondreau told the Miami Herald that Pierre's accusations, which she also sent out in a mass email, were just excuses.

“I can understand Ms. Pierre’s frustration. She used Vodou, that didn’t work. And then, Jesus endorsed her," Tondreau told the paper. “If she got Jesus’ endorsement, that’s the biggest endorsement you can get.”

Pierre, wedging in a hopeful note before typing out a Psalm, wrote a suggestion to her (55) supporters: "Keep my campaign flier as a souvenir. It might worth a lot one day." 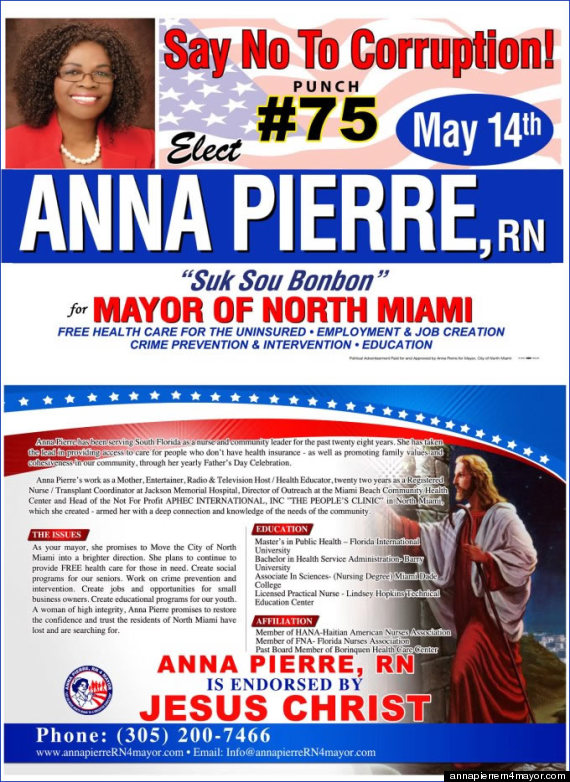