How does a painting come into being? Through a combination of struggle, careful construction, and the hazy in-between, Annie Lapin creates paintings that shape how you see them while documenting their own creation. Her newest exhibition, "Various Peep Shows," features loosely rendered collages of paint that come together to form impossible yet inviting spaces, treating architecture as a code which may or may not be cracked.

"Quick, confident brush strokes appear to rest lightly on the surface of the canvas, operating as pure mark making until the slow burn of an image makes its way to the eye," Honor Fraser Gallery describes of the show, giving a sense of the slow breed of looking necessary to fully digest Lapin's work. Her painted forms teeter between ghostly figurations of a thing and literal conglomerations of pigment, the tension between the two forming meaning somewhere in the middle. The question of what painting is and how it is seen burns throughout the series, and Lapin seems partial to gorgeous hypotheticals rather than definitive answers.

We reached out to Lapin to learn more about her work. 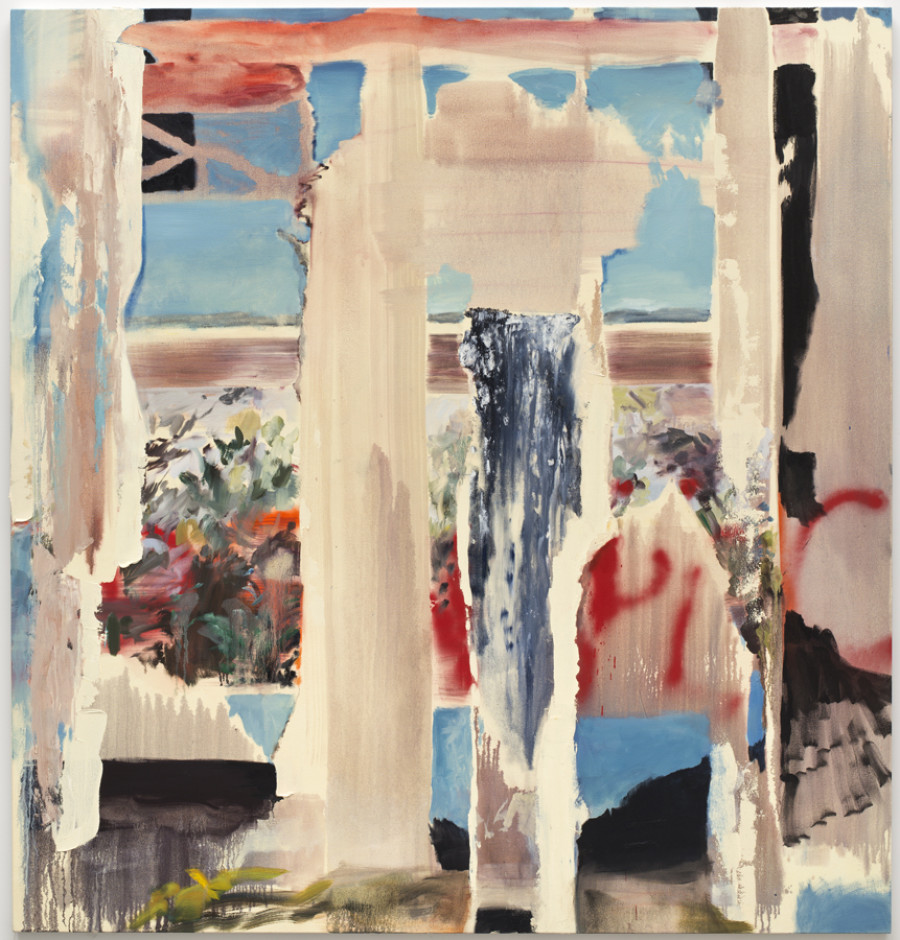 The press release for your exhibition says your paintings "appear to coalesce from the hazy set of information gathered at the corner of the eye." The paintings reminded me of the first morning blinks when your first visions are speckled with remnants of dreams. Do concepts of dreaming and waking play a role in these works?

I don’t think about dreaming and waking per se, but you could draw a parallel between my understanding of what dreams are and the way I want paintings to operate. The liminal state of waking up from a dream is the moment we realize that the representations and fragments of meaning that felt so solid in sleep are really just our minds’ creation. I’m interested in that moment of self-awareness when our minds create meaning. In dreams, the stimulus for meaning and creation in the mind is electrical firing of various neural pathways. In painting, the stimulus is physical information on a canvas perceived through the eyes.

As a painter, I’m always chasing this triad of paradoxical yet simultaneous experiences: to be highly aware of the physical/handmade construction of the painting; to have that construction generate cohesive and seemingly sensible representations in my mind; to witness representation shifts and changes as my mind turns it over. While I don’t put it in these terms for myself, in response to the question, I think that this experience of the constructed nature of ones own cognition which can occur when you view a painting is quite similar to either lucid dreaming or the moment of awareness of being awake after a dream. 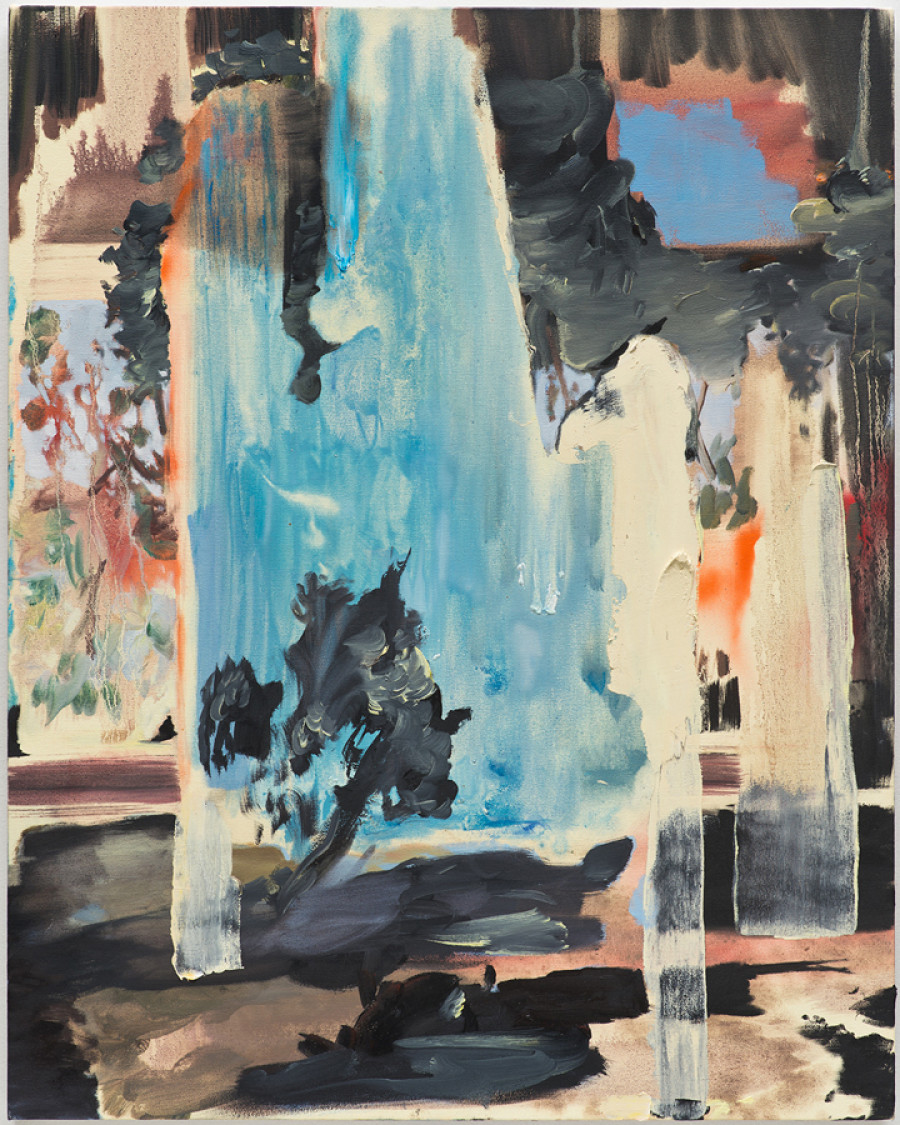 Your newest exhibition is also described as quick, confident and loose, more so than your previous shows. What brought about change?

The paintings in "Various Peep Shows" are all a single pass, so that every stroke is pretty visible on the surface. I have been thinking about the idiosyncratic mark, and how that characterizes the construction of paintings as much as a painting’s materials affect the look of a work. But I wanted to really lay it bare, and by repeating certain structures in these paintings, and creating a simple script for the landscape, the architecture, and other elements, I wanted the act of image-making to become almost like handwriting, which is both markedly individual and very connected to materiality. 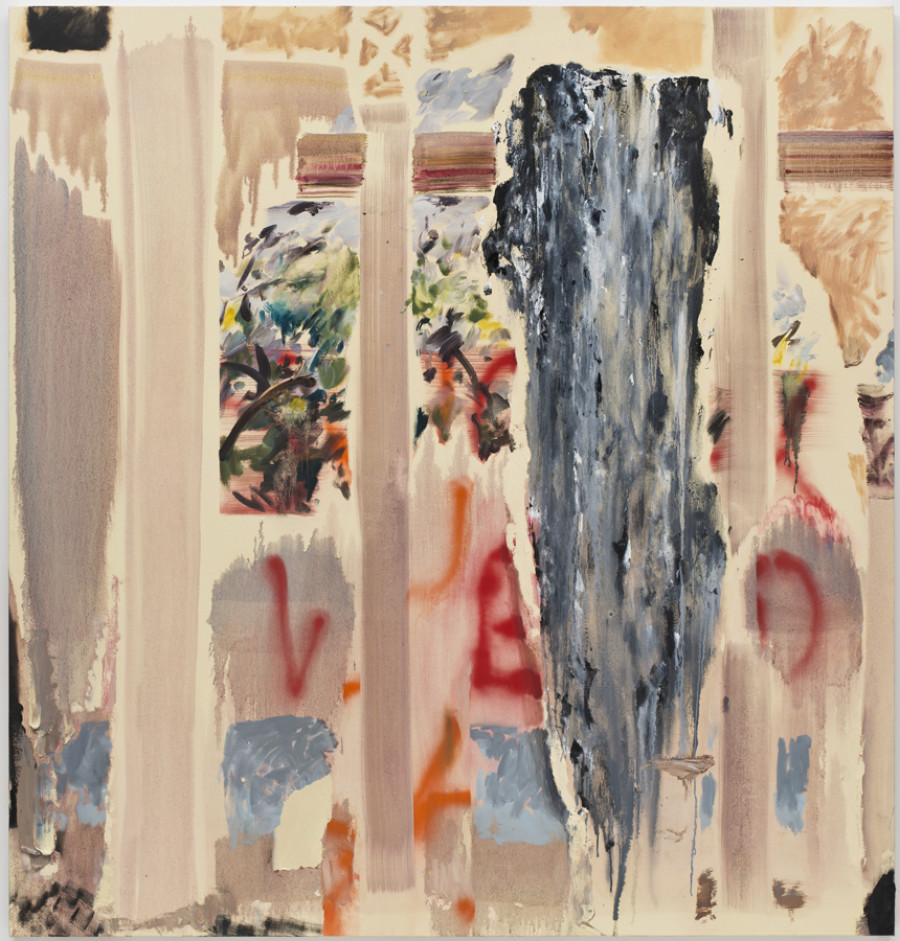 How did you decide to incorporate spray painted lettering into the works?

The spray-painted letter was an impulse that I’ve had for a really long time, but couldn’t justify. For years, at various points in the studio I’ve fantasized about vandalizing my own paintings with language, but it felt like an irrational, potentially self-destructive thing to do. However, recently, as mentioned before, I began to think about the works as a kind of handwriting anyway. Even more pressing was my need to get straight to the point about the way I was using landscape imagery in my paintings -- as a system of representation that could be pushed until it could be confused with purely formal mark making, while retaining deep psychological and representational triggers. Letters are the same for me. Thinking about how letters operate allowed me to systematize the imagery and construction of the paintings in this show.

Through Stands and Looks Sideways, 2013

Many of the painting depict windows. If this commenting in any way on the conception so figurative paintings as windows into other lands?

The frame is one of the most fundamental structures of painting. I don’t use it to reflect upon the notion of figurative paintings as windows, but rather as a formal device to draw attention to the construction of the work as well as to ruminate on the act of looking at a painting.

How are creation and destruction interacting in this exhibition?

There are elements that appear to depict a kind of entropic self-destruction in this work, so there is an illusion of a subtractive effect. But it’s really just an illusion. The way the works are constructed is to allow each painterly decision and mark to be left out there. Even if a layer of landscape-ish gestures covers a row of letters, there is an interaction there that is meant to be visible and forms part of the abstract synergy of the work. I think the tension between what seems to be destructive but is actually constructive is a big part of the work and the way I think. 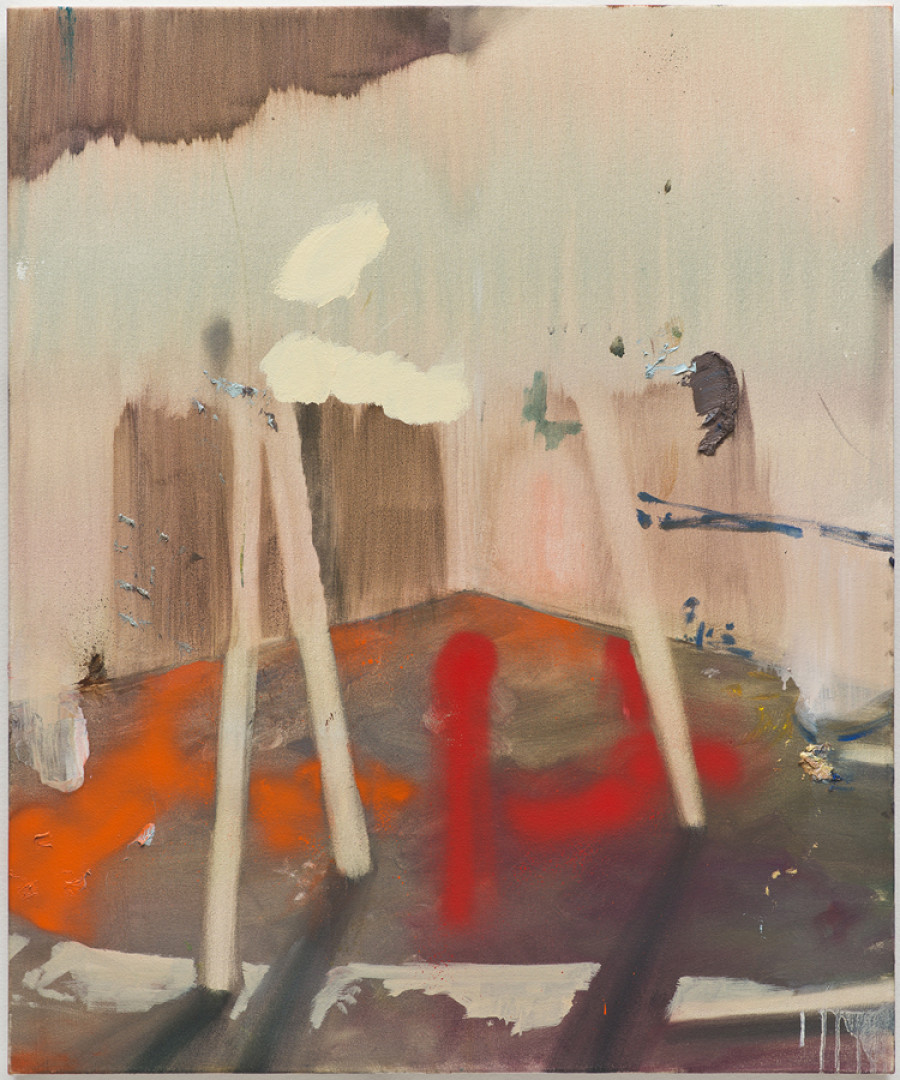 What is the last artwork you saw that affected your artistic style or process and why?

Last summer I spent two weeks in Turkey, and became really obsessed with kilim rugs. I can’t fully explain how this affected the current work, but I’m aware that is did. Looking at images that were woven into a surface rather than painted on top really affected how I wanted the images to impregnate the surface of the canvas. Perhaps the parts in which you look through architectures to get to a deeper point in the painting, and all the little trompe l’oeil moments which push certain marks to a simulation of higher or lower relief are my way of trying to create a space in the picture plane that isn’t just an illusion of spatial depth, but rather an illusion of material depth, like fabric soaked with ink rather than superficially painted. I was also aware of how the images in kilim rugs arise out of this history of hand gestures that occurred on the loom, and that despite their highly geometric nature, each work was highly idiosyncratic and imperfect – almost like a kind of expressionism that just happens to be applied with different sort of timing than expressionistic painting. 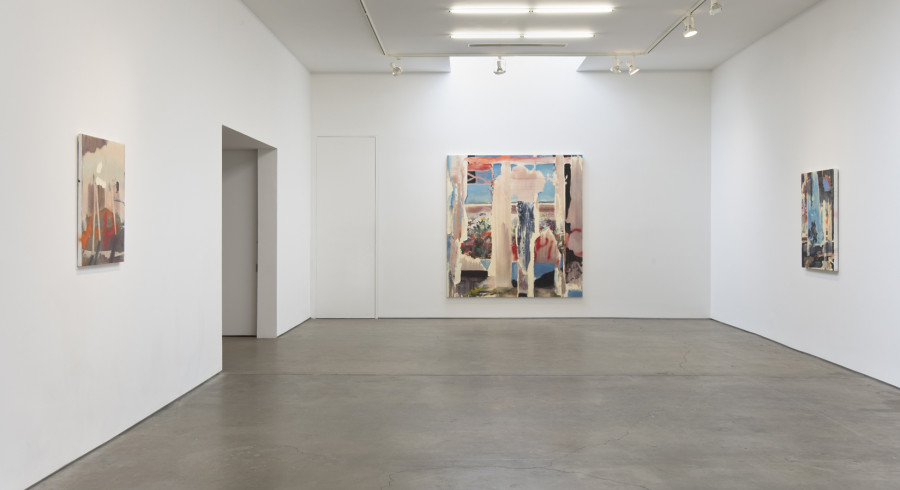 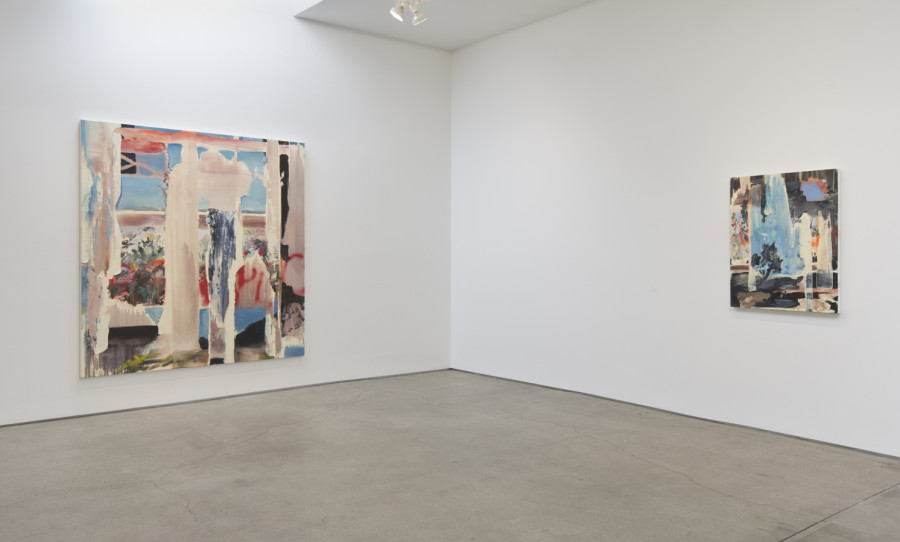