PREVIOUSLY: Leaked photos of Apple's planned sale prices for the day after Thanksgiving are giving an initial indication that the computer and device company will be offering somewhat shallow, but nonetheless good, deals on some of their most popular products.

The deals are essentially the same offers as last year, though the discounts dig deeper into Apple's inventory.

Unfortunately, it looks like there's still no discount on the new iPhone 4S or its predecessor.

Apple is also offering discounts on accessories, all of which are posted on 9to5Mac.com. Those deals include discounts on official Apple accessories as well as those from third party manufacturers.

While these specific deals have not been confirmed by Apple, the company has announced a special one-day sale set for November 25 on an ad banner posted in its online store.

The leaked deals, via 9to5Mac.com: 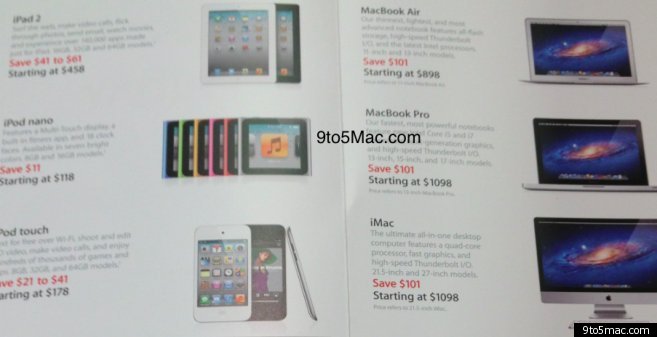