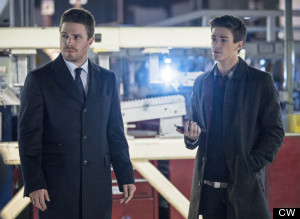 Wednesday's episode of "Arrow" (8 p.m. EST Wednesday, CW) is titled "The Scientist," which is appropriate, given that it's chock full of chemistry.

Forgive the groan-worthy pun; it's possible I'm a little too giddy about how well this episode handled several elements -- particularly the introduction of Barry Allen, a.k.a. the Flash.

Allen, who's played with a great deal of deft charm by Grant Gustin, may one day get his own spinoff. But the good news is "The Scientist" is more than just a backdoor pilot or an hour's worth of market research from DC Comics. "The Scientist" could have consisted of a truckload of dutiful setup and laborious world-building, but the hour crackles with "Arrow's" usual verve and energy. Barry Allen -- who's not yet the Flash when we meet him -- is gracefully incorporated into a show that knows where it's going and what to do with the heightened, satisfyingly melodramatic world it has created.

It's hard not to think that the "Arrow" message boards will be in a tizzy after Wednesday's episode: Gustin's scenes with Emily Bett Rickards, who plays tech genius and Oliver Queen confidante Felicity Smoak, throw off a lot of sparks. But Rickards, "Arrow's" crucial secret weapon, also has great chemistry with star Stephen Amell and with David Ramsey, who plays John Diggle (Oliver's bodyguard and the third member of the show's core trio -- both Diggle and Felicity know about Oliver's crime-fighting alter ego). I cannot in good conscience tell "Digglicity" 'shippers, "Olicity" advocates or newly minted "Flash-licity" fans not to write all three kinds of fanfic, because the world surely needs them all.

That said, one of the great things about "Arrow" is that Felicity -- originally meant to be a minor recurring character -- is an important person in her own right; she's not just Tech Whiz or someone's future girlfriend. As terrifically played by Rickards, Felicity is a smart, confident, klutzy but fiercely loyal woman with great fashion sense and a moral backbone as strong as one of Oliver's arrows. Without the central emotional bonds among Felicty, Diggle and Oliver to ground the aspiring hero's journey, "Arrow" would be a lot more disposable. What "Arrow" understands is that even those who are exceptional and often admirable -- heroes, in other words -- are still capable of disappointing other people, experiencing doubt and having unrealistic goals.

Amell is rightly famous for his abs, but he's done his best to convey the character's emotional dilemmas, and he's become more convincing as the show has evolved and become even more sure of itself. "Arrow" may not be the deepest show on TV, but that doesn't mean it's superficial. Like "Spartacus," "Banshee" and "Strike Back," it's a stylistically sharp, well-paced adventure story ably supported by moral architecture that's sturdy yet evolving -- not unlike a good graphic novel.

If I have one complaint about the new season, which otherwise has displayed admirable focus and momentum, it's that it hasn't slowed down enough to spend quality time with characters like Diggle, Felicity, Slade Wilson (Manu Bennett) and even the quietly iron-willed Moira Queen (Susannah Thompson). "Arrow" has a couple dozen characters cycling in and out all the time, and this season it has made strong additions to the cast with Caity Lotz (Sarah Lance/Black Canary) and now Gustin.

But there are so many characters populating Starling City that it's possible to be jolted by occasional sightings of Summer Glau, who is so far mostly underused as a spiky business frenemy of Oliver's. Many of the show's strongest episodes have focused more heavily on smaller groups, which is just my way of saying I hope we see fewer "every supporting character gets two scenes" episodes, and instead get more focus on the characters mentioned above in the second half of the season. I also hope "Arrow" finds a compelling purpose for Katie Cassidy, who has been great on other shows but whose by-the-numbers lawyer character seems even more expendable this season.

To pivot away from the generally enjoyable Starling City soap opera of it all, here's a fact that should be generally acknowledged: "Arrow" is one of the best-directed shows on TV. It simply looks fantastic, and its action scenes are especially kinetic and exciting. It's impossible to overstate how important it is for a drama derived from the world of comic books to have confident and distinctive direction and editing. Any story with roots in such a gloriously visual medium should look great, damn it.

When talking about the show to friends, I often describe "Arrow" as a live-action motion comic, and I mean that as a compliment. The best comic books use colors, shadows, shapes and space to establish atmosphere, mood and a sense of momentum. "Arrow's" consistently fine roster of directors does this every week on a CW budget; their palettes are well-chosen, their compositions are evocative and memorable, and the drama's fight scenes are often electric -- as is the case in Wednesday's episode. When it comes to action, "Arrow" puts much more expensive one-hour shows to shame.

The smoke and shadows that "Arrow" employs aren't just pretty to look at; the drama's aesthetic reflects the ambiguity of Oliver's situation. One of "Arrow's" strengths is that it doesn't necessarily glorify either the rich playboy or the avenging Arrow. Oliver's alter ego often wins the day in confrontations with bad guys, but there are times when he goes too far, and some of my favorite scenes have depicted Diggle and Felicity telling him just that. He's still figuring out how to save his city, and he couldn't keep his Season 2 vow to stop killing people (though he now approaches the death of foes quite differently). He's evolving, but "Arrow" recognizes that Oliver is an angry, hurt, driven man who is trying to do good in a sea of ugliness and corruption. He does want to be a better human being, but he picked up a lot of baggage on the remote island he inhabited for five years. As Felicity says in Wednesday's episode, "Why couldn't you have been marooned on Aruba?"

Speaking of the island storylines, sometimes those flashbacks to Oliver's past aren't particularly worth the trip, despite the charisma and dry wit of Bennett as Wilson. But this week, the flashbacks are closely tied to events in Starling City, and the island events don't have the cursory feel that they occasionally do in other episodes. Just about everything on "Arrow" is amped up a level or two this week, but one reason I've stuck with the show since it debuted is that it knows that the little touches are as important as the epic moments and the big picture.

Felicity is more flustered than usual this week, and that is never not entertaining. There are moments of dry wit and high drama and at least one dun-dun-dun surprise. And just look at how director Michael Schultz handles Barry Allen's arrival in Starling City from a purely visual standpoint. It's a treat.

Allen may not be up to speed yet, so to speak, but the reliably enjoyable "Arrow" often leaves more expensive and highly touted shows in its dust.