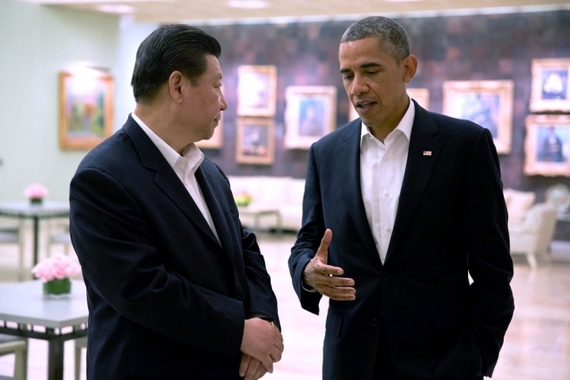 Chinese President Xi Jinping will be in Washington next week and people say he's tough. One U.S. China expert described him as "the most authoritarian leader since Chairman Mao," while a U.S. military expert called him "the most powerful commander in chief since Deng Xiaoping."

The timing couldn't be better. As the U.S. debate over Iran's nuclear ambitions reaches a climax, Xi's visit offers a golden opportunity to examine whether the rise of China's latest "strongman" heralds the arrival of a new nuclear threat.

Chairman Mao and Deng Xiaoping presided over the construction of a Chinese nuclear arsenal that was small and kept off alert. It was intended to be used only after China was attacked with nuclear weapons. Unlike the United States, Mao and Deng supported a nuclear strategy based on the principle of no first use of nuclear weapons. Neither Chinese leader believed that nuclear weapons could be used successfully on the battlefield to fight or win a war. Their sole purpose was to deter a nuclear attack.

The size, composition and alert status of China's nuclear forces were set accordingly. Both Mao and Deng believed the mere possibility that a handful of Chinese nuclear weapons could reach a handful of U.S. or Soviet cities would prevent either nation from using or threatening to use nuclear weapons against China.

To create that possibility Mao and Deng built a small but reliable nuclear force. They deployed it in a vast network of underground tunnels and hardened fortifications to discourage their nuclear armed rivals from trying to wipe it out with a first strike. The old Chinese leaders were not concerned about launching quickly. U.S. and Soviet nuclear forces trained to launch their weapons within minutes of receiving warning of a potential nuclear attack. Chinese nuclear forces trained to launch several hours, or even several days, after being struck by enemy nuclear weapons.

For Mao and Deng that was good enough.

Xi seems less confident. China's nuclear strategy is still premised on the assumption that the sole purpose of nuclear weapons is to deter a nuclear attack. But Xi's requirements for deterrence may be higher. He is modestly increasing the number and diversifying the types of missiles China can use to deliver nuclear warheads. He also appears to be considering raising the alert status of those missiles so they can be launched before they are demolished by an incoming attack.

As the high-stakes negotiations with Iran rose to the top of President Obama's nuclear arms control agenda, discussions with China about its nuclear arsenal languished in low-level talks that went nowhere. U.S. participants recently called on China to upgrade the talks, but Chinese participants complained that during 10 years of talking the U.S. side provided nothing they could tell their president that would lead him to believe a nuclear dialog with the United States would ease Chinese anxieties about U.S. missile defenses, U.S. long-range conventional strike weapons or U.S. military space capabilities, all of which threaten the viability of China's comparatively tiny nuclear force.

In addition to faltering bilateral nuclear arms talks with China, lack of progress in international nuclear arms control negotiations leaves the diplomatic door open for Xi to make more significant changes to China's nuclear posture. China's smallest re-entry vehicle is nearly 1,100 pounds, too heavy to permit China to place multiple warheads on its solid-fueled mobile missiles or more than three warheads on its somewhat larger, liquid-fueled silo-based missiles. But China could design a lighter, smaller re-entry vehicle and new nuclear warheads--if it resumed nuclear testing. The implementation of the Comprehensive Test Ban Treaty (CTBT) would prevent that. Likewise, the total number of Chinese nuclear warheads is currently limited by China's existing stock of usable plutonium. But China could decide to produce more. Starting negotiations on the Fissile Material Cut-Off Treaty (FMCT) would inhibit Xi from taking that step. Unfortunately, it is unlikely Obama will move the CTBT closer to implementation by securing U.S. Senate ratification or begin negotiations on the FMCT.

For the moment, there is no indication that China's new strongman will tie his reputation to a dramatic expansion of China's nuclear forces or make any fundamental changes in the well-established nuclear strategy of his Communist forbearers. But Xi's interest in placing China's nuclear weapons on a higher state of alert could create a new nuclear danger: the potential for an accidental or mistaken Chinese launch. This risk is heightened by potential glitches with the fledgling missile warning system China is apparently starting to build, which could lead to false warning of attack just as U.S. and Russian systems have.

President Obama should bring this issue up when he sits down to talk with his Chinese counterpart. It is probably too much to hope for, but both presidents could and should make a joint public commitment, backed up by concrete steps, to take and keep their nuclear arsenals off hair-trigger alert.

Dr. Kulacki follows internal Chinese debates about nuclear weapons and is a regular contributor to allthingsnuclear.org.