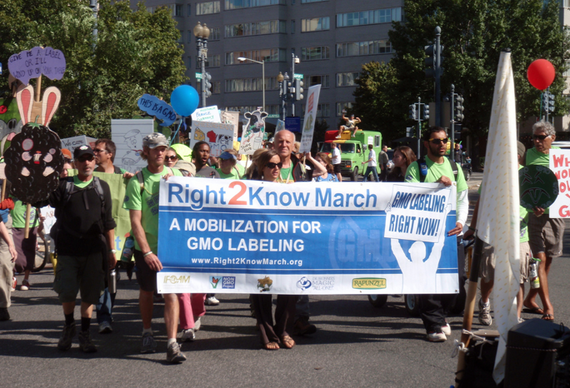 The blame-game was in full swing this week in the aftermath of the GMO labeling deal announced by U.S. Sens. Pat Roberts and Debbie Stabenow as embittered organic, consumer and environmentalist groups who want mandatory labeling struggled for a cohesive strategy to oppose the deal many have dubbed a "dream" for the food and biotech agriculture industries but a disaster for consumers.

Though agricultural and food industry interests celebrated the proposed legislation they called a "compromise," dozens of food, farm, environmental and consumer groups penned a letter Monday to members of the Senate decrying what they called "profoundly undemocratic" deal-making. The proposed law, the groups said, cheats consumers and is the product of hidden, back-room bargaining between the senators and industry interest groups.

The groups are outraged that their key demand - on-package language that states clearly if a food contains genetically engineered ingredients - was traded away in favor of codes that consumers must decipher by scanning with smart phones. The Grocery Manufacturers Association (GMA) has been pushing for such codes. Other provisions are almost as onerous, the critics say, and all act to further the interests of food companies and sellers of biotech seeds like Monsanto Co. If passed, the law would nullify the mandatory GMO labeling law that takes effect July 1 in Vermont, which requires on-package statements.

But the ire is not only directed at conventional food companies and big biotech agriculture companies. A large share of the anger is being directed at the influential Organic Trade Association (OTA), which signed off on the deal despite the fact that many leading organic businesses and groups are aligned with consumers in wanting on-package labeling. The new proposed bill contains several provisions favorable for the organic industry, which in many ways benefits from a lack of clear GMO labeling - consumers who want to avoid GMOs know they can do that simply by purchasing organic products.

As well, some organic industry leaders said they feared if they did not give in, the industry would suffer retribution in the next Farm Bill or through other means.

"Politics is all horse-trading at this point and I was told by Senate staff that 'the organic folks got everything they asked for,'" Dave Murphy, pro-labeling activist and head of Food Democracy Now, wrote in an email to dozens of pro-labeling groups.

The deal has not only divided consumer and environmental groups from leading organic players but it has also blown wide open deep divisions running through the U.S. organic industry itself, spurring calls for some organic players to leave OTA membership. Those involved characterize the organic industry as divided between the "organic elite," which includes companies owned by conventional corporate food giants, and the independently owned "authentic organic" businesses and groups. Large food conglomerates have increasingly been buying up organic companies in recent years, giving many large players a foot in both pro- and anti-GMO labeling camps.

It was the "organic elite," and leadership at the OTA, that agreed to the new labeling deal, not the 'authentic' side, industry players said this week. They were troubled that OTA has hired a lobbying firm - Podesta Group- that also works for the Biotechnology Innovation Organization (BIO), which represents the interests of Monsanto and other agrichemical industry players.

The bitterness runs so deep that some players are now pulling out of a two-day summit scheduled for July that is supposed to build consensus around GMO issues, sources said.

"This is a crucial moment," said one leading organic company executive who did not want to be named publicly. "Here we are splitting ourselves in two right at the critical moment. Certain key legislators feel like they are getting mixed messages. It is really disconcerting to see what is happening to our community."

Conflicting press statements issued shortly after the bill's announcement on June 23 marked the fissure between organizations thought to be working together. A statement issued by OTA celebrated "important provisions that are excellent for organic farmers and food makers - and for the millions of consumers who choose organic every day."

That contrasted sharply with the press release issued the same day by the Consumers Union, which called the deal "unacceptable to the nine out of ten Americans who support mandatory GMO labeling" and just another way to allow companies to keep consumers in the dark."

The uproar over the OTA's support for the bill led OTA leaders to offer an explanation to members on Monday. The organization said during the labeling negotiations it saw a "ratcheting up of attacks on organic from Congress" and OTA sources said those including threatened actions related to organic animal welfare standards, appropriations and other matters.

OTA said it realizes the bill is "not perfect," but it does mandate nationwide labeling, and it does maintain organic as "the gold standard for transparency and non-GMO status." Among other things, the bill would ensure that food certified as organic can clearly inform consumers that organic food is non-GMO. And it would prohibits a company from making a non-GMO claim solely because the food is not subject to labeling under the bill.

"A compromise GMO labeling bill was happening, with or without us." OTA said. "Not protecting the core value of the organic label would have been risky and wrong for an association whose critical mission is to protect the value of organic."

Arran Stephens, founder of the organic Nature's Path Foods, and a founding member of the Non-GMO Project, which seeks to build the non-GMO food supply, said the "mudslinging" was interfering with efforts to effectively lobby against the Stabenow/Roberts deal.

"We believe the Dark Act is a bad deal for consumers and we support clear, on-package labeling," Stephens said. But, "OTA has done a lot of good, so let's not throw the baby out with the bath water, just because they may have made a poor decision."

Nature's Path was one of the nearly 70 organizations that signed onto the June 27 letter to the Senate. The Organic Consumers Association and the Organic Seed Growers and Trade Association are also signed on. The OTA is not.

The letter lays out the key complaints with the proposed bill as follows:
• No mandatory standards- The Senate bill prescribes no mandatory standards for GMO labeling even though it preempts the labeling laws of several states including Vermont, Connecticut, Maine and Alaska. Standards are to be set over the next two years by the U.S. Department of Agriculture.
• Many current and future GMO foods would be exempt from labeling- The novel definition of "bioengineering" in the bill would exclude from labeling a vast number of current foods produced with genetic engineering, and new generations of food made with new "gene-editing" techniques.
• Discriminatory for rural, low income and elderly populations- The bill anticipates that GMO labeling will be done primarily through QR codes ("digital" labeling) accessed through smart phones. But more than 50% of rural and low income populations, and more than 65% of the elderly don't have smart phones.
• Violates state sovereignty; preempts GMO seed laws- The bill not only preempts state food labeling laws, but also specifically preempts GMO seed labeling laws, such as those in Vermont and Virginia that are designed to help farmers determine what seeds to buy and plant.
• Lacking enforcement for violations of mandatory GMO labeling- The bill provides no civil or criminal penalties for failure to comply with GMO labeling requirements.

The legislation is expected to go to the Senate floor for a vote possibly next week, sources said, and both sides are hard at work lobbying lawmakers. The food and agricultural industries oppose mandatory labeling of foods made with genetically engineered ingredients, saying labeling is unnecessary and costly and could scare consumers away, while consumer groups want mandatory labeling because of concerns about health and environmental impacts associated with genetically engineered crops.

Sens. Bernie Sanders and Patrick Leahy, both from Vermont, are refusing to support the proposed law.

"I remain deeply concerned that it is not going to offer transparency for consumers," Sen. Leahy said in a speech on the senate floor.

In addition to the anger at OTA, some of the finger pointing and accusations of "selling out" have been directed at Gary Hirshberg, chairman of the Just Label It campaign, and head of Stonyfield Farm, an organic yogurt company. There has long been distrust simmering in part because of Hirshberg's hiring of Scott Faber, former chief lobbyist for the Grocery Manufacturers Association, to run Just Label It. Faber is also vice president for government affairs at the Environmental Working Group. EWG said it does not support the Roberts-Stabenow labeling proposal. Faber declined to comment.

Hirshberg said he was not involved in the final deal making, and never had indicated to lawmakers that the QR codes the bill allows for were acceptable. He said attention should be focused now on either amending the bill or blocking it. He said his group's vote-counting in D.C. indicates those who want the bill to pass "probably have enough to get this through."

The bottom line is that I don't think infighting is at all useful," said Hirshberg. "The differences among the critics are far less than the similarities in our ultimate goals."

Hirshberg penned an email to GMO labeling backers Monday calling for unity. "We are probably wiser to try to stick together than to engage in completely unproductive infighting that only allows the real bad guys to keep winning," he wrote.