Controversy continues to build around the Smithsonian Institution's decision last week to cave in to conservative pressure and pull "A Fire in My Belly," a video work by the late artist David Wojnarowicz, from its place in the National Portrait Gallery's "Hide/Seek: Difference and Desire in American Portraiture" exhibition. In the past few days, a solidarity campaign has come together, launched by artists, galleries, and major museums. 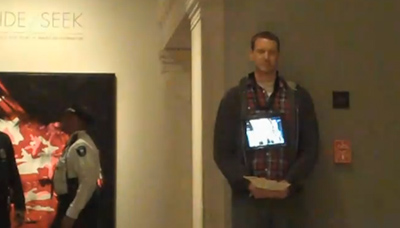 On Saturday, December 4, two activists were detained at the National Portrait Gallery while staging their own protest action. One, Mike Blasenstein, had been standing peacefully beside the entrance to the gallery containing the "Hide/Seek" show, displaying "A Fire in My Belly" on an iPad hung around his neck and holding a stack of fliers with text explaining his action. The second man, artist Mike Iacovone, filmed the action (his footage of the subsequent arrest is available online). Both were released -- but only after being made to sign letters pledging not to return to Smithsonian Institution facilities.

Yesterday, ARTINFO spoke with Blasenstein about the experience, why he decided to protest, and what Wojnarowicz means to him.

Why did you decide to go to the National Portrait Gallery with an iPad around your neck?

I just felt this is an important issue. I'm not really an artist or an activist, but when I heard that they took it down, it just seemed to send such a clear negative message. So I thought to myself, I would send my own message and bring this art back into the museum.

Tell me what happened.

Well, I first planned to show the video in the exhibition itself. But when I entered the gallery, I quickly realized that this wasn't going to work -- there were more security guards than patrons in there. So then I ended up just outside the entrance to the show, playing the video around my neck and holding out these fliers about the controversy. The most discouraging thing about it was that the few people who came up and took the fliers, as soon as they did, security guards swarmed them, basically forcing them to give back the information.

I had come hoping to be at the National Portrait Gallery all day, just showing this work, but after seeing how many security guards were around I realized that it wasn't going to last long. After a few minutes, a security guard asked me to give him my iPad and the fliers, but I didn't say anything or move. When he understood I wasn't going to cooperate, he said, "I don't have time for this shit," and took them from me.

They told me to turn around and put my wrists together behind my back, but I figured, why should I help them detain me? This is what they call passive resistance, right? And I went limp. At the same time they were surrounding my friend Mike Iacovone, who was filming the whole thing, and handcuffing him. Then they took us both into a stairwell. Security asked us, "Are you going to leave the museum?" and we both said no. They told me that this meant we were going to be arrested, and they called the [Washington, D.C.] Metropolitan Police Department. When MPD came, they left the stairwell with the Smithsonian guards, to confer, I guess. MPD came back and said that instead of arresting us, they were barring us from all Smithsonian facilities instead. We asked for how long, and they only said "a very long time." We both signed the forms.

We asked for copies, but they wouldn't give them to us. Both Mike and I, we left thinking that we were banned for life. Later, a blog got copies of the forms and posted them, and you can see what weird documents they are. On Mike's, it states that he is banned for 12 months, but mine has no time limit at all.

How does it feel to be "banned for life"?

It's upsetting, of course. But it's also silly. It's not really going to affect my life too much, not now. But me being banned from the Smithsonian is not the most important thing. I can fight that later.

Have you ever been banned from any other institutions?

What's next? Do you plan to keep protesting?

Well, yes, definitely. People in D.C. are really riled up about this. This is an important thing. As someone not really connected with art or activist circles, the response has been really encouraging. People keep reaching out to me.

For this kind of censorship to happen in 2010 -- I just don't want it to happen again. I was too young to really be aware of all it meant back in the 80s when they were attacking Robert Mapplethorpe. But even then, not having admitted to myself that I was gay, even though I really knew it, I knew that it was an attack, that it was about an attack on gay people.

The whole uproar about the video is awful. But in another way it also makes me happy. When I went in there, when we went into the gallery, I just felt so alone. But it has meant so much to see the outpouring of support, to see that people really care. People really do care. And this is not going to happen again.

More information controversy surrounding the Smithsonian's censorship of David Wojnarowicz including how the art world has come together to decry the suppression of the work, with two museums, in particular, showing great leadership; an Op-Ed on why Wojnarowicz matters now more than ever; a Q&A with Dan Cameron, curator of the New Museum's 1999 Wojnarowicz retrospective; and, from Tyler Green's Modern Art Notes, an idea for how everyone can band together to give David Wojnarowicz his voice back.