What amazes me most about the Women's March is that was so brilliantly organized for the day after one of the worst days in American history--the inauguration of...oh, you know. It was certainly one of the worst and most surreal days of my life.

I, a political junkie who reads voraciously to keep up with every happening, didn't watch the inauguration or any recaps.

I, who drink one glass of wine a day, fantasized about making a pitcher of margaritas and climbing into bed with it. 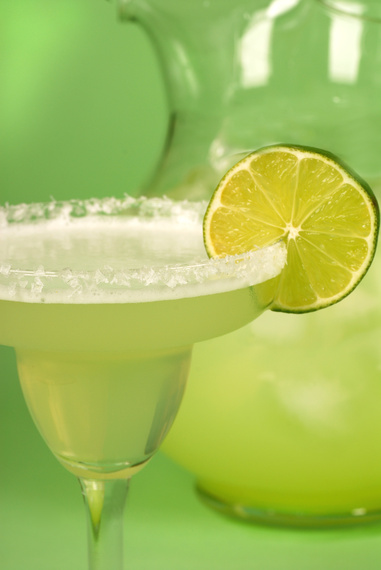 I, who love chocolate but stay away from it but for several days a year, called my husband and asked him pick up a big chocolate bar while he was out.

So I was headed into a maudlin mood and destabilizing behavior, even though I knew I was going to be attending the Women's March on Asheville the following day with a good friend and our husbands.

Friday evening at 6:00, having resisted that pitcher of margaritas, I finally poured a glass of wine, settled on the sofa under my husband's arm, and put on a "Motown 25 Years" DVD, made back in 1983.

I was in full escape mode.

In between performances, we listened to commentary that spoke of the struggle black entertainers faced in an era in which they were forced to stay in separate accommodations, often in different areas of town, than white performers with whom they had just shared a stage.

I reflected on how far we had come since then, then felt a pang at the very real possibility that we were regressing under Trump's "Make American Great (Hate) Again" vision.

My husband and I got up and danced. I sang along to my favorite Motown songs. I swooned again as Michael Jackson moon-walked--that was the first occasion of his doing so. Do you remember it? It electrified millions. Re-electrified, I made a choice. I chose to celebrate the possibilities of what can and will be accomplished, based on what was accomplished in the past.

I realized that whatever we had to do here and now, even if it's been done before, we would do it. Significant change, as I saw in the Motown video, only comes about with passionate action. The Women's March that would be happening the next day became more real, filled with purpose, and deeply meaningful.

I ignored the chocolate bar. I made love to my husband. When I woke up Saturday morning, I was filled with anticipation and excitement. We were going to Asheville to be a part of a movement that was determined to hold fast to every human rights victory that had been won over the past century.

I took pride in knowing my sister was going to be a part of Women's March on Ashland, Oregon. From coast to coast, women metaphorically linked arms, so that mine became linked with my sister's. Here she is, the one in the pink hat: 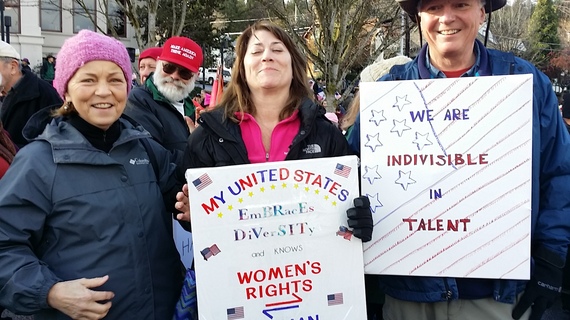 In Asheville, I saw 10,000 faces filled with purpose. Instead of despair, I saw people filled with buoyancy. Instead of hatred, I saw harmony. Instead of prejudice, I saw camaraderie. We chanted in unified, vigorous voices: "Forward Together, Not One Step Back." Here I am in the back, sans pink hat, but among plenty of others: 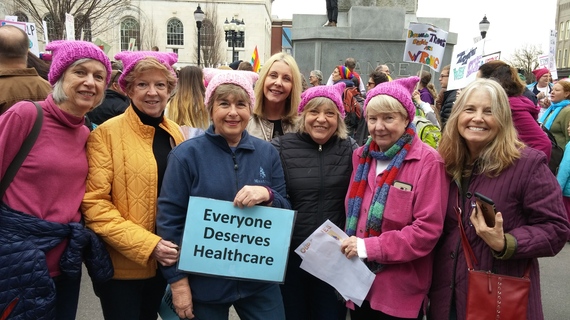 I knew that because we marched and because we raised our voices, the darkness associated with this presidency was being co-opted by confidence. I realized that I was in the perfect place for shoring up hope, promoting action, cementing solidarity, and planning a future for our country that is hugely different from the one Trump envisions. Yes, there was a vibe of peace love and understanding; but the stronger vibe was, Don't Tread On Me.

And I saw in the body language around me, on the placards that were being hoisted, on the expressions of generations of females--from grandmothers to granddaughters--that we were unified women on a mission.

We felt powerful; but then, we are. And we intend to prove it, over and over again. As my favorite t-shirt at the Women's March on Asheville warned: 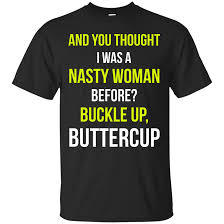