Growing up with the Beatles in the 60s, hearing and watching them evolve in real time, was a defining experience for millions of baby boomers around the world. Throughout our childhood and adolescence, these four guys provided us with a nonstop deluge of music, images, and ideas, more engaging and stimulating than just about anything else happening in our young lives. 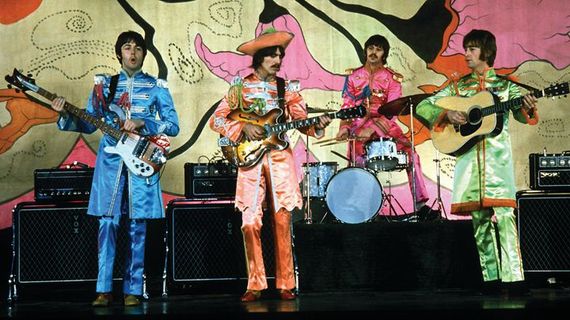 Each new release elicited a kind of joy that only the Beatles could elicit. Each television appearance was a rare treat, presenting not only their newest musical offerings, but their newest look. No DVR or YouTube, we watched each "promotional film" with awe, not knowing when we'd see them again. Forty-five years after the band broke up, the Beatles 1+ CD/DVD elicits that same joy, and the fleeting sense of wonder that the Beatles really happened and that we witnessed it.

The newly released 1+ set is a musical and visual feast; a treasure trove for fans of any age. The set includes a newly enhanced CD of their twenty-seven number one hits (originally released as the Beatles 1 in 2000), a DVD of twenty-seven "mini films" (as the Beatles called them) for each hit, and a DVD with twenty-three additional videos of B-sides and alt versions of some classics. Even clips we've seen many times before--familiar as our own home movies--seem new because of the enhanced color and clarity.

The films and the Beatles themselves are bright and alive in ways we haven't seen. The color palette and design of their mod and hippie finery, and later, their washed denim, reminds us how fashion-forward they were. The texture of their clean and dirty hair, their perfectly imperfect skin, the earth tones and sunbursts on their guitars, the fluffy clouds above the Abbey Road rooftop, and the green(er) number 46 bus careening through Penny Lane are among countless newly vivid details that create richness and depth.

The black and white series from the November '65 shoot at Twickenham Studios ("I Feel Fine," "Ticket to Ride," "Help!," "Day Tripper," and "We Can Work It Out") are the original, primordial music videos. With some poor lighting choices and goofy props, we see the carefully coiffed Beatles, the epitome of cool in their black turtlenecks (and soon-to-be trendy turtle necks and sport coats) creating a new art form. The affection and non-verbal communication that flowed among them is delightful to watch.

Fans intrigued by the Paul Is Dead rumor (yes, it's still a topic of discussion) will appreciate the clarity of Paul's missing tooth in Michael Lindsay-Hogg's "Paperback Writer" video, the first color clip in the set. The most colorful clip, "All You Need is Love," puts you right there at the hippie festival (along with Mick Jagger and Marianne Faithful) to witness the broadcast that anointed the Beatles as sages for the children of the global village.

But before you even get inside 1+, there's quintessential Beatle packaging. As with Beatles releases in the 60s, the packaging itself invites you in and adds tactile satisfaction to the aural and visual experience. Inside the Sgt. Pepper-red slipcase is a beautifully designed book with a bright blue hardcover. (Though the blue of the cover isn't quite that of Paul's uniform, the overall use of color and design, combined with the promise of an immersive, multi-media experience evokes Pepper for me). Each of the fifty films is given two pages, with a photo, dates, location, key personnel, and a relevant quote on the first page. On the facing page are brief descriptions of both the song and the film. These little blurbs, informal and informative, seem to have been written with an eye toward legacy, with reverence for the Beatles and the material that is just short of gushy.

That said, the set offers much to gush over, with many sweet surprises. I think I had a smile on my face the whole time I was watching it. For the uninitiated or casual fan, it's a nice concise overview of the Beatles' dazzling musical development and evolution from fresh-faced, cherubic mop tops to, only seven years later, four tired friends walking down a long and winding road that stretched out to the horizon and into our collective consciousness.

Like 1995's Anthology, 1+ is a sparkling portal into Beatleworld that will create a new cohort of Beatle enthusiasts and rekindle dormant Beatle passion in others. My book, Beatleness, puts these songs and films into historical context and shows how baby boomers' response to this music and these images fueled the cultural shifts of the sixties. Together, they make a great "Beatles' Starter Kit" for young people. For those who grew up with the Beatles, 1+ is, like Beatleness, a review and reminder of the whole Beatle experience.

Though each of the fifty films shines in its own way, "Eight Day's A Week" stood out for me. Though the Beatles didn't perform the song at Shea Stadium, the clip is a montage of images from the historic show. Created for 1+ with the intent of capturing the zenith of Beatlemania, it succeeds beautifully. The sharp, opening footage of the orange and blue paneled stadium on a hot summer day evoked the World's Fair for this Queens native, and for a moment I was nine again, with mosquito bites, a skate key, and a transistor radio. The "I Love George" pin on a fan's Word's Fair hat is exquisite. Madras print, peter pan collars, sleeveless cotton shirts, and empire waists provide a snapshot of teen girl fashion of the moment.

The first DVD is an hour and fifty minutes; the second one is a little over an hour and a half. I recommend watching each one in one sitting, or both in one sitting. Immersion in Beatles 1+ is a nice break from the disturbing events that have been happening in the world lately. There is something transportive and uplifting about it. Consider it Beatles therapy.