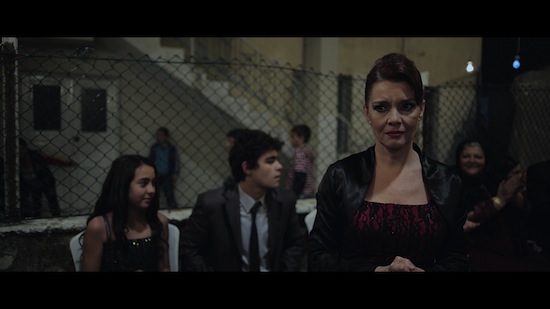 There are films that hit you in the gut, powerfully and undeniably, at first viewing. For me, that is usually followed by a need to be alone, retreat to a place where I can decompress from the emotions I feel and which don't leave room for talking, thinking or writing about it. Then there are films that need a day or so to sink in, films that slowly but surely insidiate themselves in your heart and soul, to form there basis for conversations and inspiration for months, years to come.

Turkish filmmaker Deniz Akçay debut work Koksuz - Nobody's Home belongs to this latter category, and it has taken me at least 36 hours to fully understand the film's might.

Part of the "Venice Days - Giornate degli Autori" sidebar at this year's Venice Film Festival, Nobody's Home is the story of a family in crisis. After the father's death, the family dynamic has shifted and each person within the nucleus deals with this breakdown in a different, but equally alienating way.

The mother Nurcan, played by the spellbinding Lale Başar, has taken on the role of the helpless victim, while the elder daughter Feride, played by Ahu Türkpençe with grace and insight, has inherited the undesirable role of caretaker. The brother İlker, also played to brooding perfection by Savaş Alp Başar, the only male left within the family nucleus, misses his father and, in typical teenager fashion, acts this out through drugs and sex, instead of dealing with it head on. Then there's the younger sister Özge, the lovable child actress Melis Ebeler, who wants desperately to be a part of the family, but only manages to feel ignored and forgotten. When Feride decides to marry, the fragile balances of this family's codependency snap.

The strengths of Nobody's Home as a cinematic work are plentiful, but what appealed to me was the perfect insight into a dysfunctional family, to which, I'll make a bold statement here, most of us living in the modern world belong. But also, for someone like me who always looks for bridges to "the Other", for artistic proof that those of us coming from the East or the West are basically the same -- we bleed the same red blood, we feel the same hurt and joy, we deal with the struggles of life in the same way -- Nobody's Home represents the perfect example. This is a film that could equally be set in middle America, or could take place in any city in Europe, and we would still take away from it the same message, intrinsically understand the same pain, share the same broken family syndrome.

Filmmaker Akçay, barely older than 30, makes me proud of being a woman because she is someone who understands the power of responsibility and having a conscience when it comes to our loved ones. I know Nobody's Home allowed me to identify things within my own family that I never dared to think out loud. And understanding something is always the first step to making it better.