They were beautiful: a row of trees that lined a path to the ocean. They provided respite from the winds, a home for birds, shade and oxygen in exchange for our CO2. They were part of the walking trails at Fort Funston in San Francisco, and every time we reached them, my dogs would get excited. They would start vocalizing and surging ahead. They knew. Because the trees --or at least I liked to believe the trees -- foretold of what was to come: the ocean was within reach. There was sand to kick up, balls to chase, water to frolic in. I don't know if the trees meant anything to the dogs, but I loved them. And they no longer exist. Each and every one was cut down, leaving a row of stumps, an ugly scar on the beautiful landscape of one of San Francisco's open space treasures.

Invasion biologists believe that certain plants or animals should be valued more than others if they were at a particular location "first." When the species that were there "first" are in the same habitat with a species that came later, they assert that the latter should be eradicated. In championing such views, the movement has paradoxically embraced the use of traps, poisons, fire and hunting, even when these cause harm, suffering and environmental degradation--as well as the destruction of a beautiful, tree lined path to the sea. 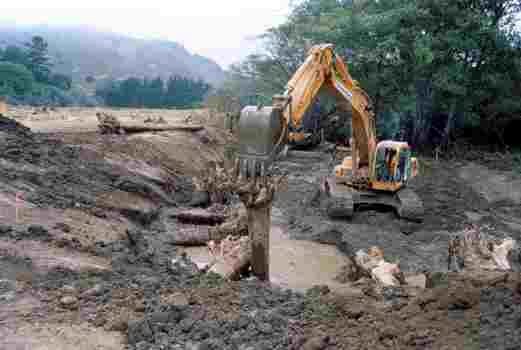 Destruction of trees in the Golden Gate National Recreation Area. Courtesy of milliontrees.me

In Fort Funston, it was not long before the dogs were unwelcome, too; before the birds declined in number as their habitat was upended; before the plants were ripped out and the rabbits who lived in them disappeared as well. What was left in their place was row after row of "caution" tape, telling people to keep out. And what happened there is by no means unique. In San Francisco, on the Channel Islands, all across the United States, plants and animals are being trapped, poisoned, hunted, burned and destroyed by people who claim the mantel of environmentalism; by groups like the Audubon Society, the Nature Conservancy, and the Sierra Club. When Illinois spent $3,000,000 dumping tons of chemicals into Lake Michigan to kill one fish (and ended up killing hundreds of thousands of others), the Natural Resources Defense Council cheered. Even the science writer for the New York Times has weighed in, suggesting mass killing and the eating of animals that do not pass the arbitrary litmus test of worthiness by environmentalists. 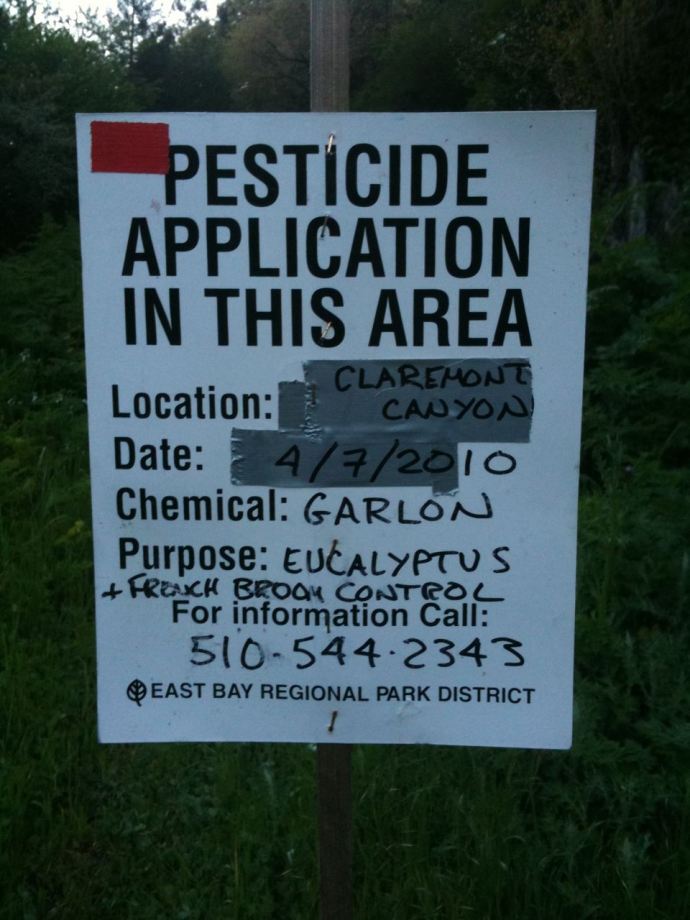 Pesticides known to cause cancer and other health effects in animals being sprayed in San Francisco Bay Area parks and canyons. Courtesy of milliontrees.me

And the nativist movement is getting worse and increasingly violent, both in rhetoric (fish they don't value are called "missiles with fins") and in deeds. At a time of climate change, in a country that needs more trees, not less, nativists in the San Francisco Bay Area are proposing the clear cutting of upwards of half a million trees on San Francisco's Mount Sutro and in the Oakland and Berkeley hills as part of their ongoing war against the Eucalyptus. After the trees are clear cut, thousands of gallons of toxic herbicides will be spread throughout wildlife corridors in order to prevent resprouting. Beautiful forests will be reduced to empty, stump-filled graveyards. What is now the natural habitat for animals will become a toxic waste dump, poisoning and displacing creatures who have nowhere else to go, and all as "environmentalists" cheer and unwitting taxpayers foot the bill. 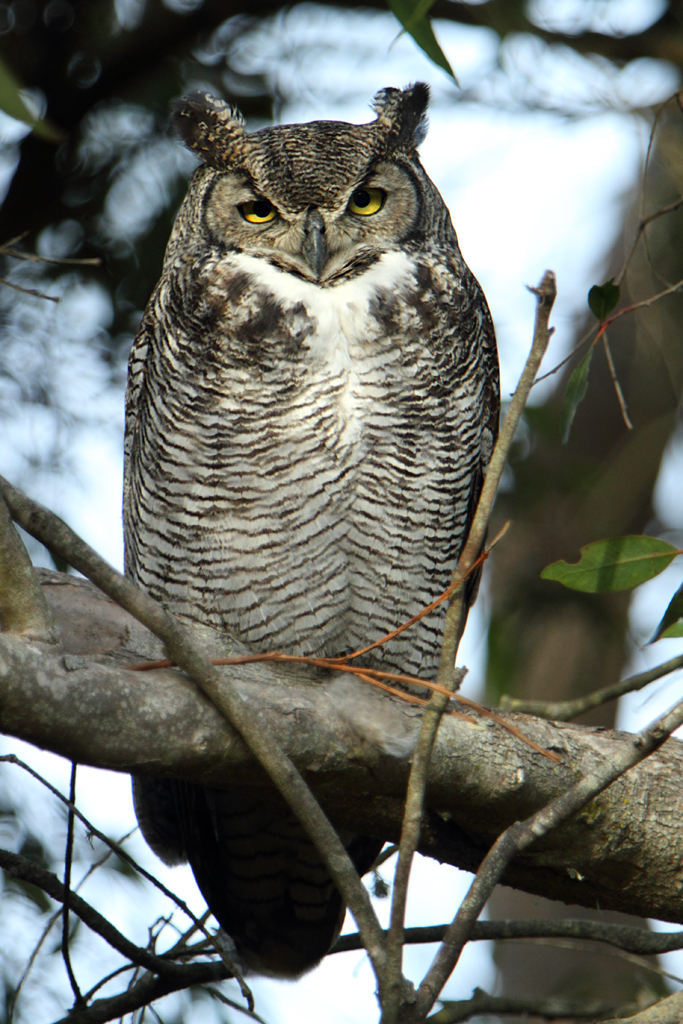 Owl in Eucalyptus. Courtesy of flickr.com/photos/alanvernon/

Who wants this environmental Armageddon to become a reality? If public backlash is any indication, almost no one. In Berkeley recently, a public meeting about the proposal led to a standing room only crowd, with the vast majority of those in attendance speaking out against the clear cutting and use of herbicides in what are now the healthy, pristine forests of the East Bay. Those who spoke out against the plan echoed the view of many of us who call the Bay Area home, those of us who chose to live here precisely because of the Bay Area's natural beauty, a beauty created by majestic, towering trees.

To most of us in the Bay Area, it does not matter what the species of those trees are, nor does it matter to the birds and other animals who make those trees their homes. However, a small group of individuals who have an irrational hatred of certain species of trees are threatening to turn some of the most stunning open spaces in the Bay Area into environmental war zones, leaving those of us who do not subscribe to their narrow agenda to watch with sorrow and great heartbreak as decades-old trees fall to the chainsaw; as animals are displaced, harmed and poisoned; as beautiful, lush forests are reduced to hillsides of barren stumps. Is that what environmentalism should be?

An authentic environmentalism would not advocate that humans seek out and destroy living things for simply obeying the dictates of the natural world, such as migration and natural selection. It would not condone the killing of those plants and animals who find themselves in parts of the world where, for whatever arbitrary reason -- be they economic, commercial or aesthetic -- some humans do not want them to be. An authentic environmentalism would not exacerbate suffering, call for killing and seek the destruction of natural places. 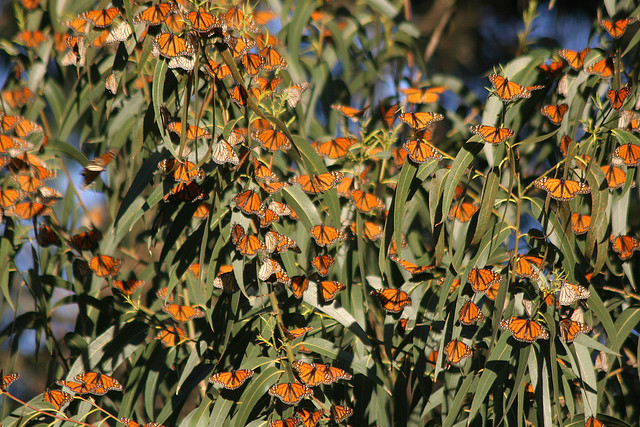 When we rip out plants, when we cut down trees, when we spray toxic herbicides and pesticides, when we poison, electrocute and booby-trap natural habitats to kill those species merely acting in accordance with nature, we not only destroy habitats and beautiful natural places, we put all living creatures, including ourselves, in danger as well. And just as disturbing, we open the floodgates of expression to our darker natures, by teaching others disdain and suspicion of the "foreign" and reverence for the familiar and the "native" -- views that have been at the heart of so much suffering, injustice and cruelty throughout human history.

Why is the starling less worthy of life and compassion than the Scrub Jay? Why does the carp swimming gracefully in a Japanese Zen garden inspire peace and serenity, but when swimming with the same grace and beauty in Lake Michigan, such horror, disdain and scorn? Because some humans among us say it is so? Because they impact narrow aesthetic or commercial interests? In fact, that is exactly why.

You won't hear nativists complaining about tomatoes or watermelon. You won't hear calls to boycott restaurants that serve apple pie. And you'll get alarm bells about the loss of the honey bee even though they, like tomatoes and watermelons and apples, were as "introduced" to North America as the Eucalyptus. When it comes to those species which are profitable, which are considered iconically American even when, by their own narrow definition, they are in fact, un-American, they won't complain. Nor will they call for the removal of the most obviously destructive and "invasive" species North American has ever experienced: humans.

Theirs is a philosophy not only lacking scientific rigor, but logical application as well. It is invoked haphazardly, whenever a rationale is needed to justify their calls for destruction of those species they have been taught to hate and wish to see exterminated. Indeed, "invasion biology" is a faux environmentalism, used to disguise the ugly truth about what is really motivating its adherents: an intolerance of the foreign that we have rejected in our treatment of one another, a biological xenophobia that seeks to scapegoat plants and animals for the environmental destruction caused by one species and one species alone: humans.

The University of California at San Francisco wants to clear cut Eucalyptus trees on Mt. Sutro, reducing a forest to stumps and displacing countless wildlife. Courtesy of milliontrees.me

It is easy to blame Republicans for an anti-environmental agenda, for ignoring climate change, for putting profits above stewardship of nature. But as the Obama Administration considers funding the destruction of half a million trees and the dumping of thousands of gallons of herbicides in wildlife corridors to the tune of $5.9 million dollars, we are left to wonder who really speaks for the Earth? In the San Francisco Bay Area, where Republican politicians are an endangered species, leading the war on nature are "environmentalists" working with clear cutters and chemical companies in the Democratic, liberal strongholds of San Francisco, Oakland and Berkeley. Even the University of California at Berkeley is hoping to clear cut tens of thousands of trees on their campus, and on Mt. Sutro, the University of California at San Francisco is hoping to wipe out half the forest.

The recent economic downturn has resulted in devastating public funding cuts to the East Bay Regional Park Service, the City of Oakland and the University of California. Citing budget shortfalls, the East Bay Park Service has cut back on services. Likewise, the University of California system has raised the tuition at their schools, putting an education at what was meant to be an affordable, publicly funded educational institution for Californians out of reach for many residents in the state. While the city of Oakland has cut various public services, including the threatened closure of most Oakland libraries. And yet in spite of these drastic changes which these institutions claim are necessary due to a lack of money, they have promised to collectively commit $1.4 million additional taxpayer dollars to fund a proposal that would literally decimate one the Bay Area's greatest treasures, local forests.

All over the U.S., funding continues for similar projects, turning pristine, natural landscapes into barren, stump covered hillsides and valleys soaked with herbicides. Lakes are poisoned. Animals are hunted. Plants are ripped out. Nature--and with it the will of the majority which is just now awakening to the terrible danger posed by the nativist movement--is violated.

If nativists get their way, this Bay Area hillside will also be reduced to stumps. Courtesy of milliontrees.me

As perhaps the most intelligent and without a doubt the most resourceful species yet to evolve on our planet, humans have a moral obligation to ensure that we use our unique abilities for good, and not harm. We are obligated to consider how our actions impact the other earthlings who share our home. And to determine, with all of our gifts of intellect and compassion, how we can meet our needs in the most generous and considerate means possible. Sadly, as a species, we have yet to comprehensively and collectively determine how we might do this. But that, in truth, is our most solemn duty, and the one and only end every environmentalist should be seeking.

On a tiny planet surrounded by the infinite emptiness of space, in a universe in which life is so exceedingly rare as to render every blade of grass, every insect that crawls, and every animal that walks the Earth an exquisite, wondrous rarity, it is breathtakingly myopic and quite simply inaccurate to label any living thing found anywhere on the planet which gave it life as "alien" or "non-native" and then target it for destruction. We must turn our attention away from the futile effort to hold or return our environment to some mythic state that never existed toward the meaningful goal of ensuring that every life that appears on this Earth is welcomed and respected as the glorious, cosmic miracle it actually is.