"Every 30 minutes a farmer in India kills himself ..." This frightening fact is pointed out in "Bitter Seeds," the third documentary in "The Globalization Trilogy" directed by Micha Peled. The 12-year project aims to generate debate about public policy and consumer choices in some complex issues relevant to all of us. Peled is the founder of the nonprofit Teddy Bear Films, which he created to make issue-oriented films such as "Will My Mother Go Back to Berlin?" and "Store Wars: When Wal-Mart Comes to Town." 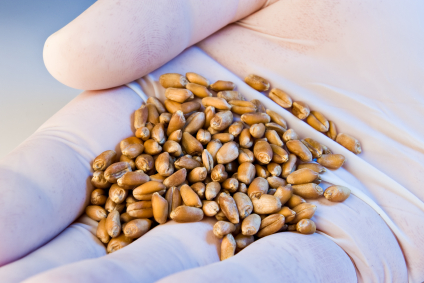 "Bitter Seeds" follows a season in a village in India from planting to harvest. There are three important stories in this film, each revolving around the multinational corporate takeover of India's seed market and the effect it has on farmers and farming all over India and the world.

Like most of his neighbors, the protagonist in the film, Ram Krishna, must engage a money-lender to pay for the mounting costs of modern farming; he puts his land up as collateral.

The only seeds available in India now are GMOs (genetically modified organisms), which require farmers to pay an annual royalty each time they are replanted. The GMOs need additional fertilizers, and as the seasons move forward, more insecticides and pesticides. The soil in which these seeds are planted requires more water. All of which means more and more money for the farmer to lay out.

As Krishna's story moves forward, his cotton is attacked by mealy worms, which threaten to destroy his entire crop. His daughter has reached marrying age and Krishna must find money for her dowry.

Another story weaving in and out of the film is that of a neighboring girl in college who has recently lost her father to
suicide
, an end claiming lives all over India's farmlands. She wants to tell his story, along with the stories of all the other suicide victims in the area. Her research and intuition have shown her that at the root of these suicides are GMO seeds. Her family is not behind her desire to become a journalist or to expose the family story, but this young woman moves ahead, interviewing her neighbors.

In the film we also meet a seed salesman who argues that GMO seeds are better than the seeds the farmers previously used, and Vandana Shiva, an activist who speaks strongly about the damage the GMO seeds have done to the agricultural system throughout India and the world.

"Bitter Seeds," like "Food, Inc.," shows how much we don't know about genetically modified seeds, their hidden costs and health effects. The GMO industry vigorously fights in the United States as well as in other countries to prevent mandatory listing of GMO foods on product ingredient labels. This should at the very least raise our concern.

The recent announcement by BASF (the world's leading chemical company) that it is abandoning its production of GMO crops in Europe because of a lack of acceptance "from the majority of consumers, farmers and politicians" was an acknowledgement of a reality many biotechnology companies have been hesitant to countenance: Europe does not like genetically modified crops.

Although there is a strong and organized movement pushing for labeling in the United States, why does the U.S. Food and Drug Administration think it's OK to consider genetically modified seeds harmless until proven otherwise? Why isn't it the other way around? Why is our health not being protected unless and until GMO seeds can be shown to be totally safe?

Earth Open Source is a nonprofit organization dedicated to assuring the sustainability, security and safety of the global system. In June 2012, it published "GMO Myths and Truths: An Evidence-Based Examination of the Claims Made for the Safety and Efficacy of Genetically Modified Crops" by Michael Antoniou of Kings College London School of Medicine in the United Kingdom; Claire Robinson, research director of Earth Open Source; and John Fagan, an early voice in the scientific debate on genetic engineering. In the report, the authors explain how genetic engineering poses special risks, claiming that GMO foods can be toxic or allergenic; how GMO feed affects the health of animals; how GMO seeds do not increase crop yield potential; how studies claiming the safety of GMO crops are generally industry-linked and therefore biased. Anyone interested in the "other side of the story" from that fed to citizens by the industry should read this report.

The number of farmers markets in this country has more than doubled in the last three years. Locavorism has become more than a buzzword, it's an accepted way of eating. People want to know who their farmers are and how they are growing the food. Is it sustainable, organic and/or biodynamic? What seeds were used? People throughout the world are demanding that anything grown with GMO seeds at the very least be labeled. And until there is word that crops grown from GMO seeds are as good for us as their unmodified counterparts, it is perhaps best to avoid them.

What's behind the exponential growth of India's wine trade?

Cooking rice and the magic of starch on saris