Another day, another piece of evidence showing a vast disparity in who gets arrested over drugs. 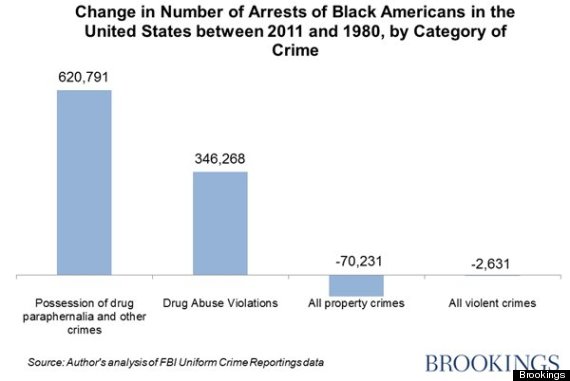 When confronted with numbers like these, drug war proponents and law enforcement officials consistently argue that arrests result from crimes committed. In other words, if black people sell or use illegal drugs more often, they will be arrested more frequently.

But the Brookings report also casts doubt on that defense:

Whites were about 45 percent more likely than blacks to sell drugs in 1980, according to an analysis of the National Longitudinal Survey of Youth by economist Robert Fairlie. This was consistent with a 1989 survey of youth in Boston. My own analysis of data from the 2012 National Survey on Drug Use and Health shows that 6.6 percent of white adolescents and young adults (aged 12 to 25) sold drugs, compared to just 5.0 percent of blacks (a 32 percent difference).

Part of the explanation, according to the Washington Post, could be that, in black neighborhoods, drugs are more often sold outside, in the open, whereas in predominantly white neighborhoods, the activity takes place inside.

"If you sell drugs outside, you're much more likely to get caught," the Post notes.

If you are caught, Rothwell says, it will likely have a deleterious effect on your ability to move up the socio-economic ladder.

"The drug war has a profoundly negative effect on racial equality, and on rates of upward mobility," Rothwell writes.