This just may be the most terrifying place on Earth -- at least if you happen to suffer from ophidiophobia, aka fear of snakes.

About 90 miles from the city of São Paulo lies Ilha de Queimada Grande, or "Snake Island" -- a place so filled with venomous serpents that it's been called one of the "world's deadliest islands." 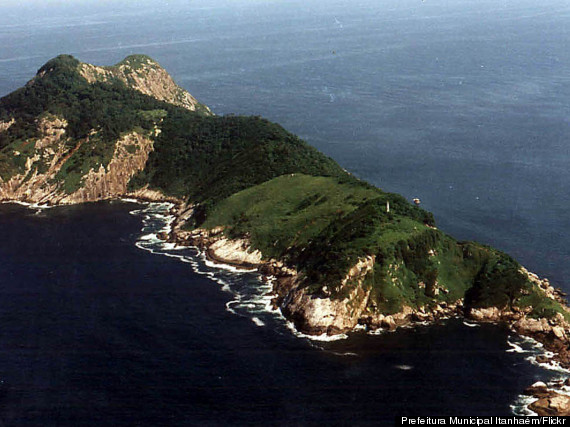 Scientists estimate that up to 4,000 snakes live on the 110-acre island, with some reports indicating that you can find one snake for every six square yards. The island is "more packed with snakes than the Spanish midfield is with talent," according to a Wall Street Journal article published ahead of the World Cup.

And these aren't just any snakes. Queimada Grande is the only known home of the golden lancehead (Bothrops insularis), one of the most venomous vipers in the world. The snake's venom is said to be three to five times stronger than that of any mainland snake, according to Smithsonian.

Oh, and it's capable of "melting human flesh."

No wonder, then, that the lancehead genus is reportedly responsible for 90 percent of all snakebite-related deaths in Brazil.

Brazilian lore is full of references to the snakes and their deadly ways. As the travel guidebook Atlas Obscura explains, locals in the coastal towns near the island love to recount two grisly tales:

In one, a fisherman unwittingly wanders onto the island to pick bananas. Naturally, he is bitten. He manages to return to his boat, where he promptly succumbs to the snake's venom. He is found some time later on the boat deck in a great pool of blood. The other story is of the final lighthouse operator and his family. One night, a handful of snakes enter through a window and attack the man, his wife, and their three children. In a desperate gambit to escape, they flee towards their boat, but they are bitten by snakes on branches overhead.

How did Queimada Grande become such a slithery place? At one time, the island's land mass was attached to the mainland. But rising sea levels separated the island from the coast around 11,000 years ago. Snakes that were stranded on the island were able to multiply rapidly, since there were no ground-level predators on the island.

The problem? There weren't many ground-level prey animals either. But the snakes with more toxic, fast-acting venom were able to grab migratory birds and make a quick kill--and as the golden lanceheads evolved on the island, their venom grew more potent.

Scared? Here's a handy map, just so you'll know where NOT to go.

CORRECTION: A previous version of this story stated the island was 90 miles off the coast of São Paulo. Ilha de Queimada Grande is located about 90 miles from the city of São Paulo.