A carved stone found marking a Bronze Age grave in the Ukraine is the oldest sundial of its kind ever found, a new study reveals.

The sundial may have marked the final resting place of a young man sacrificed or otherwise marked as a messenger to the gods or ancestors, said study researcher Larisa Vodolazhskaya of the Archaeoastronomical Research Center at Southern Federal University in Russia. Vodolazhskaya analyzed the geometry of the tire-size stone and its carvings, confirming the stone would have marked the time using a system of parallel lines and an elliptical pattern of circular depressions.

The elliptical pattern makes the carving an analemmatic sundial. A traditional sundial marks the time using a gnomon, a fixed vertical that casts a shadow. An analemmatic sundial has a gnomon that must move every day of the year to adjust to the changing position of the sun in the sky. [See Images of the Ancient Sundial]

The sundial belonged to the Srubna or Srubnaya culture, known for the timber-framed graves they left on the steppes between the Ural Mountains and Ukraine's Dneiper River.In 2011, a group of archaeologists led by Yurii Polidovich of the Donetsk Museum of Regional Studies was excavating a Bronze Age burial mound dating to the 12th or 13th century B.C. and uncovered the carved slab, which was marked with lines and circles on both sides. In February 2013, the archaeologists sent pictures of the find to Vodolazhskaya, suggesting that she might find it interesting given her work on Bronze Age petroglyphs. 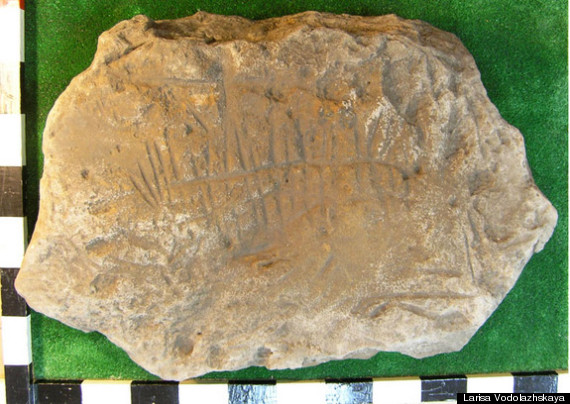 Carvings revealed to be an ancient sundial used by the Srubnaya people of the Bronze Age.

"Having received photos of [the] plates, I pondered the possible interpretations of images," Vodolazhskaya wrote in an email to LiveScience. "One of my hypotheses was associated with a sundial."

To prove the carvings represented a sundial, Vodolazhskaya calculated the angles that would have been created by the sun and shadows at that latitude and confirmed that the carvings on the slabs could have been used to mark the hours accurately.

"They are made for the geographic latitude at which the sundials were found," she said.

Unlike many modern mass-produced garden sundials purchased and plopped down without a thought to the angle of the Earth and sun, the ancient Ukrainian carvings reveal a sophisticated grasp of geometry.

The circular depressions, placed in an elliptical pattern, are hour marks of an analemmatic sundial; the largest groove on the plate, Vodolazhskaya said, marks where the vertical, shadow-casting gnomon would have been placed at the winter solstice. 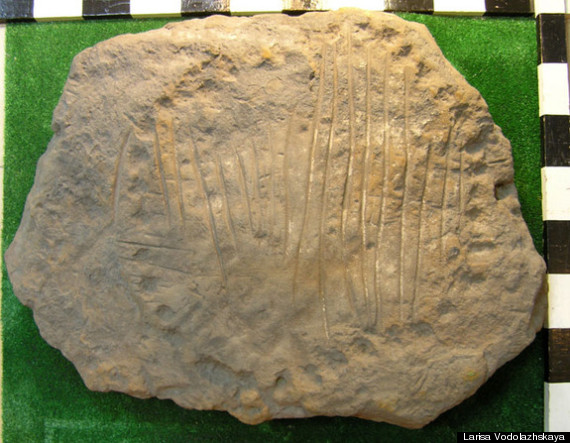 On the flip side of the sundial, inexpert carvings attempt to recreate the sundial on side A. These markings aren't properly placed for time-telling.

Meanwhile, a long carved line transected by a number of parallel grooves in the center of the slab would have acted as a linear scale for a more traditional horizontal sundial, where the hours are marked by a gnomon's shadow falling along hour lines. In this case, the horizontal sundial actually had two gnomons, Vodolazhskaya said. One gnomon tracked the time in the morning hours and early afternoon, and the second covered from late morning to evening, measuring time in half-hour increments. Ancient sundials with half-hour marks are rare, though one was discovered earlier this year at the Valley of the Kings in Egypt.

On the other side of the stone plate is a smaller horizontal sundial, as well as a carved imitation of an analemmatic sundial, this one incapable of marking the correct time. It's not clear why these secondary carvings were made, Vodolazhskaya said, though they may have been a tribute to the deceased. The carvers of the working sundial on one side of the stone may not have been part of the community that inexpertly carved the second side, she said.

The findings appear on the pre-print website arxiv.org. Vodolazhskaya and her colleagues plan to publish the work in the journal Archaeoastronomy and Ancient Technologies.

Correction: An earlier version of this article misreported the sundial was found in Russia, but the discovery in fact, was made in Ukraine.